Yesterday
My yesterday started on Wednesday (the 14th). I spent the day getting ready and then didn't go to bed because I had to leave at 03:00 in the morning to catch my flight. So it was all like one giant run on day.
Flight left San Diego around 06:30 Thursday and arrived in Istanbul around 09:30 FRIDAY. Staying up all night Wednesday was the best decision ever though because the six hour flight to New York felt like barely an hour due to me being asleep the whole time.
Hour and a half layover in NY during which we each had three shots and a tall beer (well I don't think Aaron's wife Amalie did? In fact I don't think I've seen her drink? But us three lads did (we consist of Mark, Aaron & Amalie & myself)). Then on the plane Mark and I managed to get no less than NINE small bottles of wine out of the stewardess. I teased Mark that she fancied him, but man did we have a steady supply of some shitty Chilean wine. I probably would have gotten more sleep though if I hadn't been busy drinking (I'm actually pretty slow at drinking shitty beverages).

The only other highlight of the flight I recall is a young couple sitting a few rows in front of us both went back to use the lavatories at the same time, causing us to snicker about ulterior motives. Later Aaron tells me he saw the couple getting a stern talking-to from the air marshall.

After checking into our hotel (which is conveniently located just across a square from the Blue Mosque and many other landmarks in central old town Istanbul) we went to check out the Hagia Sophia Basilica. I'd link to wiki pages here about the things I'm mentioning but this computer is painfully painfully slow. I took a number of pictures, but again, painfully slow computer, so I might upload more once I'm done with other things. I've taken 119 pictures so far, and incidently Amalie has apparently already taken 523.
After the Basilica we checked out the neat underground Basilica Cistern. It had giant fish in it that we're pretty sure eat tourists.
Also it was raining this day. That night we called it an early night around 22:00 because we were all feeling pretty jetlagged (and I hadn't slept other than in an airplane chair for about 72 hours!).


Today (Saturday the 17th)
Eight hours later the morning prayer call woke us up around 06:00. I was already feeling pretty wakeful so I got up. Figured I'd get on the internet for an hour or so before anyone else got up but lo there were already people down here on the computermachine!!
At 08:00 complimentary breakfast was served up on the top floor of the hotel, from where there was a beautiful view (see picture below). And I interrupt this narrative to mention that at this moment the evening call to prayer is being sounded.
After a delicious breakfast of local cheeses and breads and jams and yogurt and honey on the comb (it actually looked like kinda shitty honeycomb but it tasted good and different from what I'm used to!)
Then we spent several hours exploring the Topkapi Palace, the former capitol of the Ottoman Empire.
Lots of other wandering around today but I didn't set down to write an exhaustive accounting of our adventures. I was just going to bang out the highlights and somehow this is already pretty long.

Presently it is 18:35 and I believe the others are all napping. Later we plan to go to the "new" part of town and party it up, being as it is Saturday night and all.

Tomorrow I think we might ride the ferry up the Bosporus? 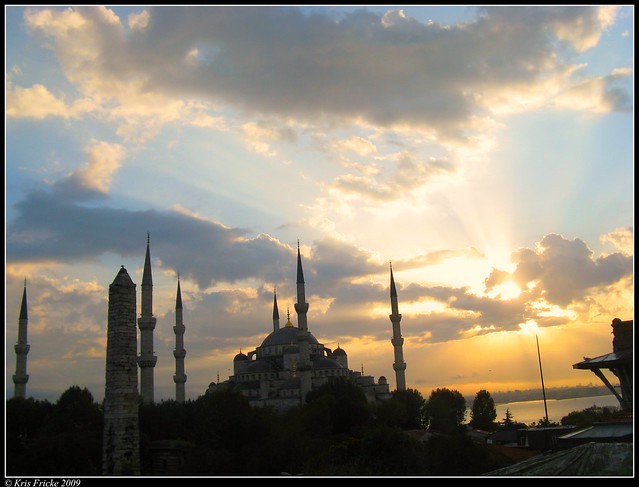 The Blue Mosque
As seen from our hotel!
Tags: epic trip 2009, report from the field, travel, travelogues, turkey, turkey i
Subscribe