Simultaneous with the "Old Timey Religion" entry I just made:


Kingdom of Laighin, Hibernia (Ireland), 375 AD - The River Nore naturally flows slowly, with a delicious chocolate colour. It is surrounded by lush emerald vegatation. Vines hang from trees that lean over the embankments, and beside the river a flat area, perhaps flooded at times of greater rain, is covered in leafy shrubs and flowers.
The scene still looks like it did a thousand years previous, and as it will look one thousand years in the future, or even one thousand six hundred and thirty four.

Several druids (or draoiochts as they'd call themselves) have gathered by the bank in their flowing white robes. Having consulted the auguries, the head druid has predicted the imminent arrival of a time traveler. 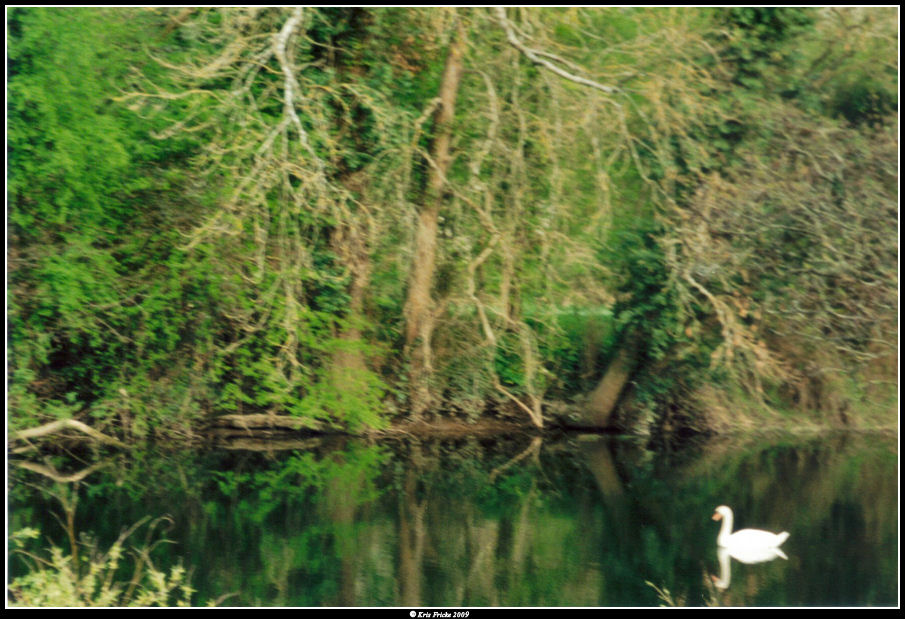 Suddenly there is a burst of light and a crackling noise and a strange contraption emerges in a puff of smoke. It appears to be a seat attached to several tanks with tubes and wires connecting them. Pistons and gears festoon the sides in several places and the machine vents steam as it comes to a rest among the lush foliage.

The pilot unbuckles himself from the chair. He is wearing tight jeans and a shirt from the thrift store that he considers to be "ironic" in keeping with the latest styles of 2009. He pushes back his dreadlocks to remove the "buds" of his ipod from his ears.

The druids look on aghast. Finally one turns to another, "I think we should sacrifice him."

Southern California, 2009 AD - It was a nice warm fall evening, and Travis, a youth pastor at Saddleback Church, was just walking to his porche to go home for the evening. Suddenly there was a flash of light and a loud crackling noise. Travis turned around to see a cloud of smoke rising from around a figure standing in one of the "reserved for pastors" parking spots.
As the smoke cleared Travis could make out that he was holding what looked like a tea kettle with flashing lights on it.
The lad was dressed rather peculiarly, "kind of like a European" thought Travis. On his feet he wore not normal shoes but what appeared to be some kind of covering that closely followed the contours of his feet. His haircut was federation standard.

The strange figure looked around, looked at the giant SADDLEBACK CHURCH sign, the "parking reserved for pastors" sign and Travis looking dumbfounded about to put his keys into a car under it.

"Oh you're a bishop! Excellent! I'm a redneck too!" exclaimed the time traveler excitedly, not realizing that what he knew as the word for that ancient religion of "Christianity" didn't exactly mean the same thing in the good ole days.
Tags: theology
Subscribe