"The Pilgrims" arrived in North America in December of 1620. What they found in the area they landed was abandoned Indian villages, some with unburied skeletons of the dead lying among the weeds --due to diseases introduced by earlier settlers,-- and a very hostile reception from those Indians still alive. It would seem the last European to come by (one of John Smith's lieutenants, Thomas Hunt) had decided it would be a jolly undertaking to capture some Indians to sell into slavery in Europe, and had gratuitously killed a number of others.
Thomas Hunt had intended to sell the Indians for £20 a piece in Spain, but apparently some friars in Europe managed to interdict this plan, and one of the indians, known as Squanto, was able to make his way back to North America, and ended up at the Pilgrim's Plymouth Colony as a translater.

In 1621 the Pilgrims celebrated what is regarded as "the first thanksgiving" in North America (there had already been a long tradition both in the New World and Europe for thanks giving feasts though). They somehow convinced some local Indians to attend.

In 1622 Indians were again invited to a feast*. Their share of the liquor was poisoned and 200 Indians died. A further fifty were finished off by hand.
Then pumpkin pie was probably eaten, though I doubt they had whipped cream.**

* Admittedly this occurred in Jamestown, some 600 miles South.

** Yeah I looked up the history of whipped cream, sounds like it would need to be colder than they could probably make it in order to whip properly 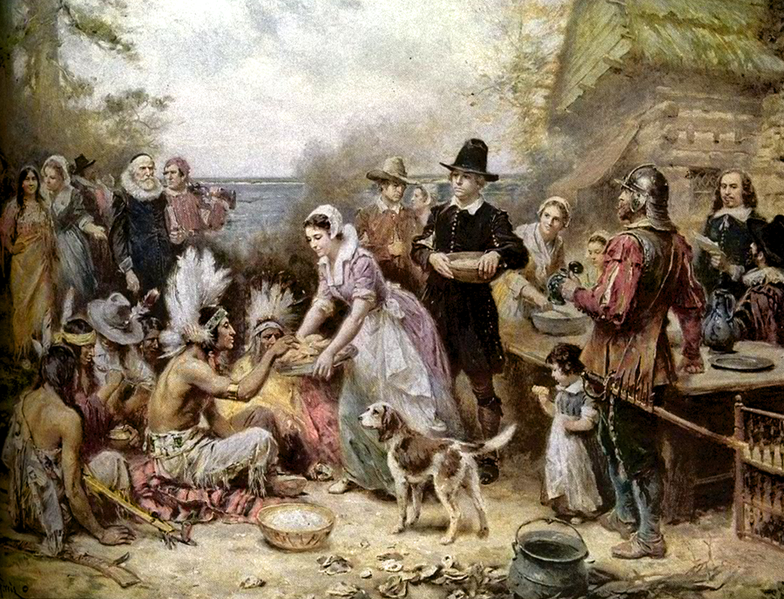 I don't usually attend Thanksgiving wearing arms and armour, but then again, I didn't just barely decide not to kill the guests THIS year

Thankyou for tuning in to another Emo-Snal Classic Historical Downer! ;D
Notwithstanding, I am looking forward to devouring some turkey/stuffing/pumpkin pie until I go into a food coma.


And in other news, tomorrow I fly up to Portland for the weekend, check into the tallship Lady Washington on Sunday, and Monday set sail! Will be sailing for at least two weeks. Internet access may be spotty.