Transit: Graveyard of the Pacific

Das Boot (1981) is an excellent movie about the crew of a German u-boat during WWII. I've always loved it because of the way it portrays a small crew trying to cope under the most stressful and cramped conditions. In the memorable first scene of the movie, the crew gets wildly trashed at a bar before heading out to sea.

I bring this up because the scene at the bar last night after our 24 hour transit through the Graveyard of the Pacific reminded me a lot of the Das Boot bar scene.
Most of the crew (some 12-14 of us) occupied almost a quarter of the bar and outnumbered locals 2:1. Four of us were still wearing foul weather gear, Tiller, the ship's dog, sat on the edge of the shuffleboard table and tried to bite the puck as it flew by and then barked angrily at it when it escaped. Pitchers of beer flowed like water. Even those who don't usually drink partook. Most were jovial and rambunctious, but some sat quietly by themselves with their beer. The cook played pool by herself.
The first mate, not normally much of a drinker was three sheets to the wind, as they say. I have no idea how much he drank BEFORE we started to become concerned but he appeared with another pitcher of beer in his hand (from which he was drinking directly) after he was already pretty drunk. Several of successfully coaxed him into walking back to the boat with us, however, and got him into bed without incident.

Before the Transit
"Sea stowing" everything began about three days before the transit. The captain advised us that "if god were to take this boat and turn it upside down and shake it, if it would move, it's not properly sea stowed." This began as an activity one did when one wasn't doing anything else but reached a feverish pitch by Sunday night. Eventually one really couldn't move anything.
We also practiced putting on immersion suits and went over emergency procedures. By Sunday night everyone was sitting anxiously and fidgity in the completely sea-stowed main hold (we were starting our transit at 3am).
Additionally, we picked up four more new crewmembers (two actually NEW new, one new-old hand, one former captain (/ current Operations Manager of the organization)) and three passengers, bringing the hold dwelling population suddenly to eight.

Transit was supposed to take about 20 hours but depending on conditions the captain commented that he was prepared for it to take much much longer.


I was one of the last people up because I had galley duty that day. When I finally finished, all the lights were out (well the main ones, the red lights are always on). I left the boat to take the trash out and while I was at it decided to walk to the shorehead one last time. It was a beautiful peaceful night, no wind and a balmy 40 (f), I didn't even need my coat. It was crisp, refreshing and quiet.
Returning to the boat, I didn't feel like bothering with bedding and getting dressed again at 3am, so I just lay down on my bunk with my coat over me and went to sleep.

Transit: Graveyard of the Pacific
For the transit we divided into three watches (we usually just all work 08:00-17:00). A and C Watch were to be on deck for casting off, and then C Watch (mine) would be off until noon.
I ended up on bow-watch as we left Astoria and sailed out the mouth of the Columbia River, peering into the darkness and riding the bow up and down as it bounded through the salty spray. Sage came up to help me but two pairs of eyes couldn't see much more in the blackness than one.
Around five, I got called back to the quarterdeck with the rest of C Watch (and where most of A Watch was hanging out). There the captain and Crazy Ivan made an offering of "the best rum we could find!" (Sailor Jerry, of course!), pouring about a shots worth each into the sea to "appease the sea gods." C Watch then got stood down until noon.
At this point the boat was pitching quite a bit (crewmate

i_id, down below on B Watch: "I was awake for the bar. It was like being in a salt shaker. :3"), and a fair number of people were sea sick (all our passengers, as it happens). Personally, I decided it would be a shame to go to bed just when the whole adventure was finally getting really fun and returned to the bow to help Sage with her bow watch.
Around six Sage got relieved at bow by Daisy. I stayed up there until around seven, at which point I reluctantly decided I should get some sleep before my 12:00 watch.
Sage had said, especially since she was going to be on watch for much of the time I'd be sleeping, and being as her bunk in the forecastle was nice and spacious and the hold was now full of people, (sick people no less, and people stumbling through it and people using the galley, etc) that I could sleep in her bunk. It was indeed infinitely more snug than the hold and easily fit two people.

Got up around 11:30 to eat a quick lunch (fried rice with stir fried vegetables in it and chicken). Boat was rocking over large swells, sky was overcast but it was bright out and not terribly cold. The forecourse and foretopsail (ie bottom two sails on the foreward mast) were set and full of wind. Altogether it was wonderful.
Furled the sails as we approached the entrance to Gray's Harbour. Heaviest seas I've worked aloft in, it was fun. At one point after the ship went for a particularly big sideways pitch everyone working above me on the topsail yard went "yeeee-ha!" in unison.
On bow watch again coming in to the harbour. For awhile every few seconds I'd have to call out "Quarterdeck! Crab pot two points to port!" "Quarter deck! Crab pots one point to starboard!" "More pots half a point to port!" "Pots dead ahead!" It was a veritable labyrinth. (Crab pots meaning the little round buoys on the surface denoting such pots, which one tries not to run over)

Arrived at Westport around 4pm, after about 24 hours at sea. The transit really wasn't that rough but I think everyone had just been extremely stressed about it. After tying up in Westport, Captain Allnut (the visiting captain) ordered pizza and a festive atmosphere prevailed in the hold. This was still petering out when the first contingent headed out to the Knotty Pine tavern. Even the next day (today) after two scheduled school groups in the morning no projects were given. We were officially open for dockside tours but no one was about to come by in the rain (one couple wandered by). We ended up just watching Wall-E in the hold.


In conclusion it was brilliant fun. (: 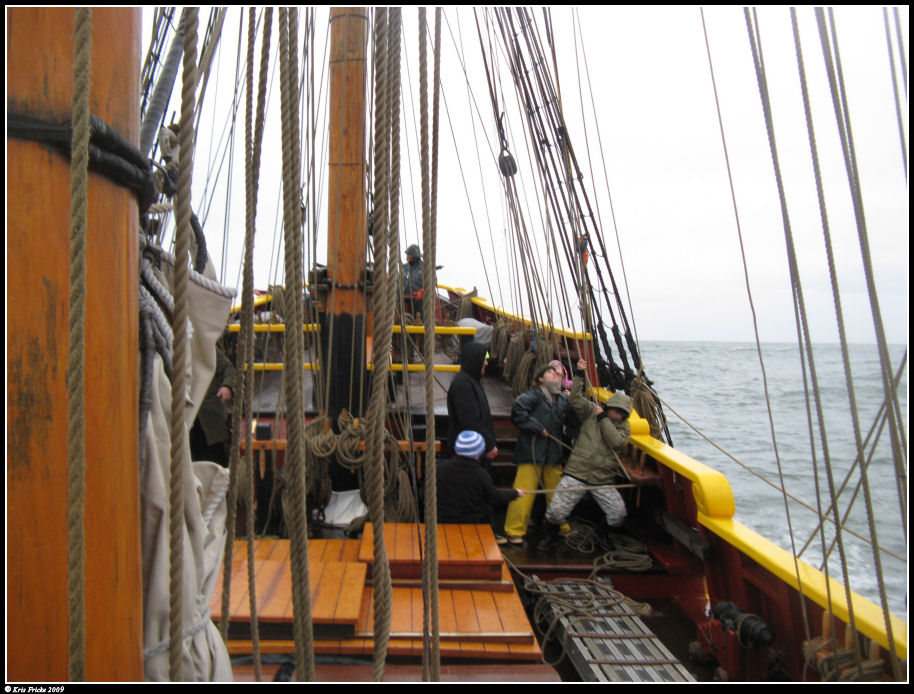