My journey home began around 10am on Sunday, at which point I disembarked the ship for the last time, while on deck my erstwhile shipmates sang out the ship's traditional (and rather vulgar!) farewell song.

First stop was the lobby of the nearby hotel to pillage their intertrons and try to make sense of the bus schedules. At this point I was able to read the advice

wildcelticrose had left me about the local buses (very appreciative thanks!!)
Now it so happened that the girl working in the hotel lobby was possibly the most attractive girl I'd seen in three weeks, and she kept smiling at me! Gratuitously starting conversations with cute girls isn't normally my style but she seemed to be veritably asking for it, so on one of the occasions when she floated past me smilingly, I commenced the chattorizing. When it came time for me to head off to the bus stop I went up to the desk and informed her "I have two questions: (1) how do you get to the transit station from here?" and after she had answered that "(2) next time I'm in town would you like to hang out?"
She said that would be awesome (or something) and now I have her number. Notwithstanding I don't know when I'll ever be in Aberdeen again but hey.

False Start
Then hurried off to find the bus stop but apparently I was one street off and traveled several blocks in the wrong direction before I asked someone and turned back around. Consequently I just barely missed the 11:30 bus. Next (and only other) bus in my direction wouldn't be until 15:30. Asked someone at the transit station if there was a coffee shop or something I could wait around in. They laughed heartily and exclaimed "You're not from around here are ya!!! Coffee shop?! HERE!? This is Aberdeen!!!"
Felt a bit awkward about returning back to the hotel and lingering there all day but didn't really have a lot of other options. Felt awkward to return to the boat after already having said goodbye to everyone, and anyway there wasn't any interwebs on the boat.
So I malingered in the hotel lobby most of the day. Cute Girl didn't seem to mind though. 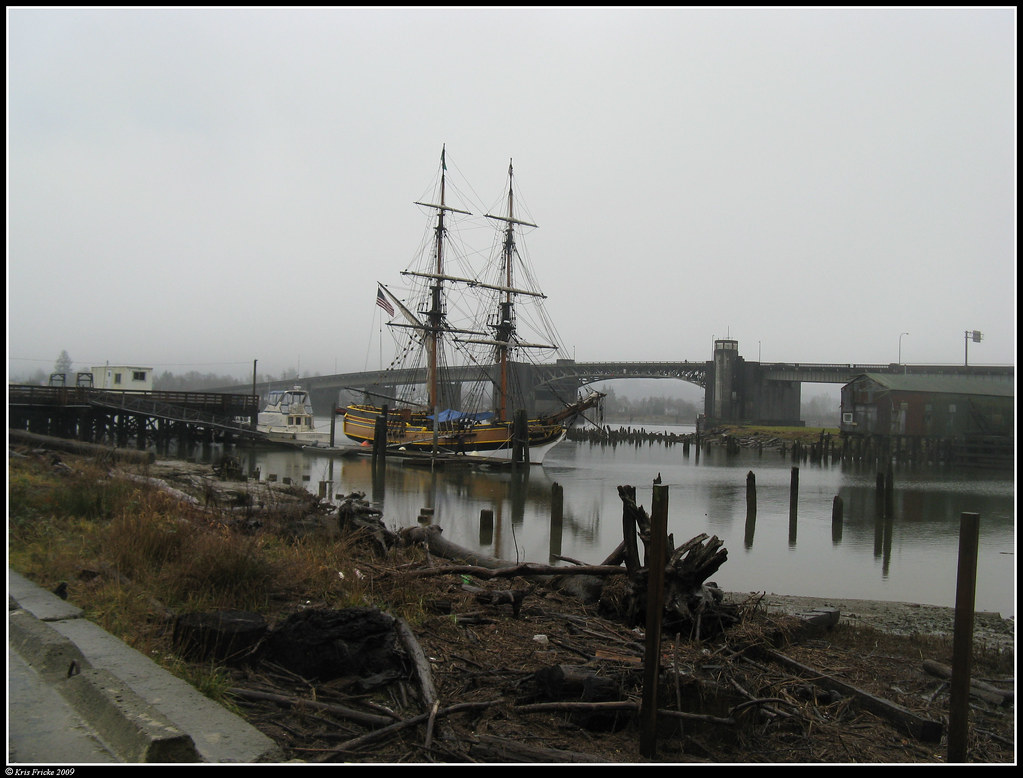 My last view of the ship as I walk away ):

Take II
Returned to the transit station. A short walk through light rain during which I was creeped out by the vagrant who looked like he could be a crazy ax murderer who (happened to be?) following me most of the way. Stopped in at Jack in the Box to get a bite before hitting the road but it was closed for a private party (!)
My bus arrived but it hadn't occured to me that I would need exact change. All I had to my name was a $20 bill, and $1.05 in change. Bus driver was utterly unsympathetic. Asked if the station office could make change and he grunted an impatient "yes." I run over there and am told an impatient "no." Run back to the bus and try to urge him to accept $1.05 but he is utterly not having it. Am I going to seriously miss my bus because I don't have fifty cents?!?!
Finally a passerby pipes in "I have fifty cents would that help?" !!! I very very gratefully accept the change and board the bus.

Upon leaving Abderdeen it occurs to me: the town itself isn't so bad, I mean, the physical town, but what makes it such a despised place is surely the people. Nearly everyone I've seen anywhere in town looks like people who love to shop at Wal-mart and are liable to turn up on the Jerry Springer show. People who throw parties in Jack in the Box. Guys who are overweight and wear stupid looking backwards baseball caps of a hip-hop style, girls who are also overweight and wear sagging pants and chew gum loudly.
Wikipedia has this to say about Aberdeen: "By 1900, Aberdeen was considered one of the grittiest towns on the West Coast, with many saloons, whorehouses, and gambling establishments populating the area. Aberdeen was nicknamed "The Hellhole of the Pacific", or "The Port of Missing Men", because of its high murder rate." (And 100 years later it's not much better!)

Anyway, at one point the bus driver brings the bus to a screaching halt and makes the door towards the back open. "Get out or spit it out!" he angrily commands. I look back confused, to see one of the backwards-baseball-cap youths lazily haul himself to the door and spit his gum onto the pavement, mumbling some kind of impertinent excuse. The guy next to me is talking my ear off about fishing in the Bering Sea, and pauses only long enough to point out the Lady Washington as we pass.

Olympia!
Pull into Olympia around five, greatly relieved to be somewhere that is by all accounts much much more cultured than Aberdeen. I have a two hour layover until the next bus towards Seattle. I'll still have to change buses at either the Tacoma Mall or "Sr 512 Park and Ride" (whereever the hell that is!), and am I bit concerned the buses will have stopped running or something by the time I get there. This whole thing feels a bit precarious.
Walking down the street things do indeed seem a lot more civilized, with shops of all different types still open. Shortly I pass The Spar, a bar/restaurant I immediately recall having heard some of my shipmates talk about. Specifically they were complaining about how it had been McMinimized -- bought by a company called McMinimins that buys a lot of famous old bars and things .. but hey it preserves them more or less how they were and otherwise they'd probably just fold, so McMinimins is fine by me.
It was still raining outside and I was sitting in this beautiful old bar/restaurant eating a delicious grilled sandwich, drinking their delicious stout, and they were playing Shout Out Louds - Very Loud over their sound system, a song I rather like. Coupled with that I was hundreds of miles from anything I am familiar with (save the boat but you know what I mean) and on this complicated journey.. I decided it was a very awesome moment.

Got on the 19:00 number 620 bus and asked if taking this bus to Tacoma Mall was the best way to get to Seattle, she said I should take it to the SR512, which is what Sage had said, so I felt relieved I was on the right track. Rest of bus ride, including changeover at the SR512 to the 594 bus was uneventful.

Christmas in Seattle!
Janelle and her friend/neighbour Lane (or something) picked me up from the bus stop when I got there around 21:20. Back at her place her friends Nicole and Nick, whom I'd met on more than one occasion in So Cal, were hanging out. Apparently they'd all been gathered to help decorate the Christmas Tree, so suddenly I was surrounded by friends in a cosey christmas-decorated little apartment. Quite the setting change from a day of riding buses and surviving the wilds of Methlaberdeen.


Monday
Monday morning I head out from Janelle's around 08:50, head down the street a few blocks to Victrola Coffee. Victrola is a very good coffee roastery and I recommend it for your coffee needs in Seattle. Got a coffee there, having gone the previous three weeks without any caffiene -- hey I needed to get something so I could plunder their wifi and why miss out on an opportunity to have some truly good coffee? Looked up how to get to the airport (light rail service had apparently only opened up days before, and there was a station three blocks away!) and was off to the rail station.
Rail to the Seatac airport. Was annoyed to find that half the seats by my gate were taken but the other half all had the first half's bags in them, while meanwhile a fair number of people were stuck standing. How rude! And then southwest has you stand in line according to the number on your boarding pass, but glancing at the numbers of the people near me they were all standing several numbers ahead of where they should have been. Jackasses.
Flight to Oakland, flight from there to the Orange County airport on a half full flight (why would no one be traveling at this day/time??), mum picked me up at the airport (around 15:00) and finally, after more than 24 hours in various modes of transportation I was back home!