A Trip to the Shorehead

After morning chores every morning (every morning the entire boat gets cleaned, the deck washed (except when it's below freezing), the brass polished, and the heads cleaned) there's a little lull around 4 bells 10am when you've finished your chore but not started a maintenance project, and some people are still working on their chores. If the remaining chores aren't something one can easily jump in and help them finish (like polishing the brass, plenty to go around without getting in anyone's way), I like to use this opportunity to make my visit to the shore head.

This usually entailed a nice refreshing walk through crisp morning air for a few hundred yards, at the end of which awaits a gloriously warm and spacious head "restroom" (We always forget they call them restrooms on land, much to the confusion of staff at restaurants and bars when we mistakenly ask for the shorehead). This walk also provides a good opportunity to call one's mother, but I usually wait until the trip back to do that, so I'll, you know, have less on my mind.

In Aberdeen the nearest shorehead happened to be in the gigantic nearby Walmart. Some shipmates were reluctant to go in there at all, as if it was a unholy cursed place the filth of which they would never be able to cleanse themselves of. Others wisely observed "I'd gladly shit on in walmart!"
The first time I made the quest for the porcelain alter into Walmart my first shock was how very many people were in there. I hadn't seen that many people altogether --much less in one place-- since I joined the boat three weeks ago! And the people were so.. strange! If you're not familiar with what "people you find in walmart" look like, turn to bad daytime reality court shows and tabloid talk shows (ie Jerry Springer). If you have the good fortune of having no knowledge of this just picture someone who seems to be only culturally attuned to the most obnoxious and wretched trends of modern society.
Meanwhile of course I probably looked to them like I'd just fallen off a 19th century boat (well they'd be wrong, it was an 18th century boat!). To wit: 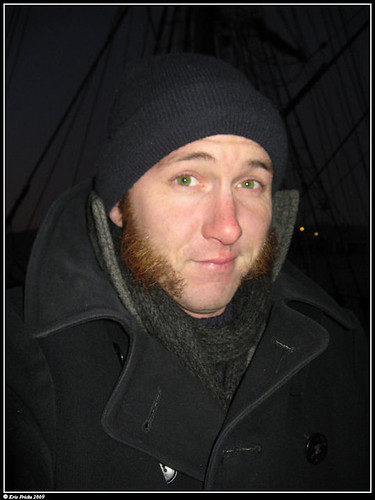 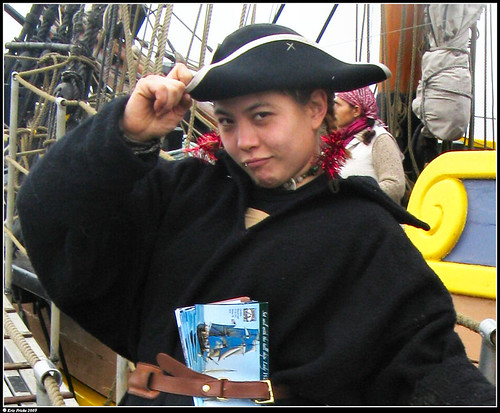 (though she was on an official mission to try to drum up people for tours. Not surprisingly, "Wal-mart people" weren't terribly interested. We probably could have sailed in on Colombus' original vessel and they'd have preferred to attend the party at Jack in the Box)

As I entered the Walmart restroom itself, the faucets trumpeted a greeting of sprayed water as I walked past. Entering the bathroom stall, the toilet flushed indulgently. Then it did so again as I tried to put the wax seat cover on, devouring it.
After I finished my business I looked for the flush lever but of course there was none. I walked away from it.. nothing. I walk back to it and wave my hand in front of the little motion sensor, nothing. I do a little jig, still nothing. Okay I didn't do a jig but I moved around a bit.
I have a strong sense of civic responsibility. This includes both the belief that one should educate oneself about and vote in local elections ... and also that one should flush toilets when one leaves. However, in frustration I'm contemplating just leaving it unflushed, when I see a little button next to the sensor.

The sink greets me with an enthusiastic spray. I put my hands under it and it obligingly sprays my hands with water ... for about five seconds. A little waving and it goes long enough for me to get the other half of my right hand wet. Mildly inconvenient but in about four spurts I'm able to get my hands entirely wet and move on to the soap dispenser, which thankfully is actually manually operated (how quaint!).
With hands now covered in soap I place them under the faucet. Nothing. I wave them in front of the faucet. Nothing. I walk away and come back. Nothing. I give it a "ARE YOU SERIOUS?!" look. More waving, more pretending to arrive and place my hands under it, nothing at all. I look for a manual override button like on the toilet but there's none to be found. I'm stuck with hands covered in soap!
Then I remember there's a drinking fountain outside the restroom. I go out there and wash my hands off, giving a passing employee a dirty look.

* but the above picture isn't me dressed in period attire, that's just how I dress ;D


See Also: Using a restroom in Cairo (AKA "the price you pay for that human touch")