"Kris, Slim & Patty, I need you up the foremast ... no wait Kris you're not cleared for aloft, why don't you help Bill clean the bilge" were the first words by first mate Sam(antha), aka "Doomfairy," to really alarm me. While cleaning the bilge isn't the most exciting thing to do, it was the "not cleared to go aloft" part that really alarmed me. I had been "cleared to go aloft" on the Lady Washington, a boat operated by the same organization ... well I'd never been "cleared" for anything, no one ever mentioned any such clearing. One just.. went aloft.

It was around two bells 9am yesterday, I'd woken up on the boat and had been planning on going home until the sail at noon which the captain had scheduled me to guest crew on as thanks for helping them out. However so many people asked me "you're hanging out here till the sail right?" that I felt guilted into staying, and hence spent my morning mucking about in the bilge.
If I wasn't going to get to go aloft though that would be a real bummer. Going aloft is the best part!!

"Battery Bill," "Texas" and I managed to make the most out of cleaning the bilge anyway. A sailor can solve practically any problem with seine twine -- in this case we used seine twine to tie sponges to broom handles and thus scrub the bilge without actually climbing into it. Meanwhile we had some music playing and talked about whatever it was we were talking about, so it wasn't so bad as far as cleaning the bilge is concerned.
Around 11:15 Doomfairy told us to belay the cleaning and downrig the equipment we'd assembled, which is sailor speak for stop and put everything away. Just after we'd dismasted the sponges from the broom handles however she gave us the order to resume for another 20 minutes. Then we were told to stop and clean up again, then we were told to wait until the public on tours on the deck were off before dumping the buckets we'd filled with bilge over the side...


As we prepared for the scheduled sail I asked her if I'd be able to go aloft and should therefore find a harness.
"well, you need to be cleared to go aloft first and that involves me going over a checklist and paperwork with you and I don't really have time for that right now" was her response. It so happened, however, that Captain Rob was nearby at the time
"He was cleared for aloft on the Lady, I'm sure he's fine" interjects the Captain
"But--"
"He can go aloft, don't worry about it" assures the captain.
"Alright well, have someone go up with you and review things" Doomfairy says to me.

As we're coming back in much later, a number of people have gone aloft to furl the sails. In the hectic frenzy of sailing I hadn't cornered anyone to going aloft with me and thus satisfying the mate's condition. I watched the climbers going up and looked at the mate, standing below scowling up at them, unsure what to do.
"Hey Kris, can you go up to the lower foretops'l, port side?" says the captain to me. I don't need to be asked twice, I hop to it!
"Hey, windward!" comes the stern complaint of the first mate as I begin to climb on the port side. I look up at the limp flag to try to discern if I should have known the other side was windward. As far as I can tell there's not a breath of air to be had. One climbs on windward so if one falls the wind will blow you back into the rigging rather than out to sea, it makes sense to do this even on a light wind so one is in the habit, but when there's so little wind it's debatable which direction is windward??
Fortunately the captain pipes in assuring her "no, it's okay, I told him to climb on that side," with, maybe I'm imagining it, but what sounded like a tint of eyerolling.


Additionally, back when we were working on the bilge, several times when one of us came on deck to get supplies out of the storage in the forepeak, Doomfairy thought to remind us to get to work.
Compare this to the Lady Washington, where you usually had to seek out the bosun or first mate and ask for a project. If you loafed around looking useless someone would give you something to do sure, and we worked hard, but no one was riding your back as if you'd been enslaved.
Now, Kyle had been the first mate up until he left the other day. I don't know if Doomfairy had been a first mate prior to this or if this is her first time, but it's not unusual for people who are new at a position and/or insecure with it to behave like tyrannical ogres like this. Nevertheless, I really don't think I'd want to take a chance that it's not something she's going to grow out of. If she's still scheduled to be first mate on the Hawaiian Chieftain in April it might really help me make the decision as to which boat to choose.


Related Picture of the Yesterday 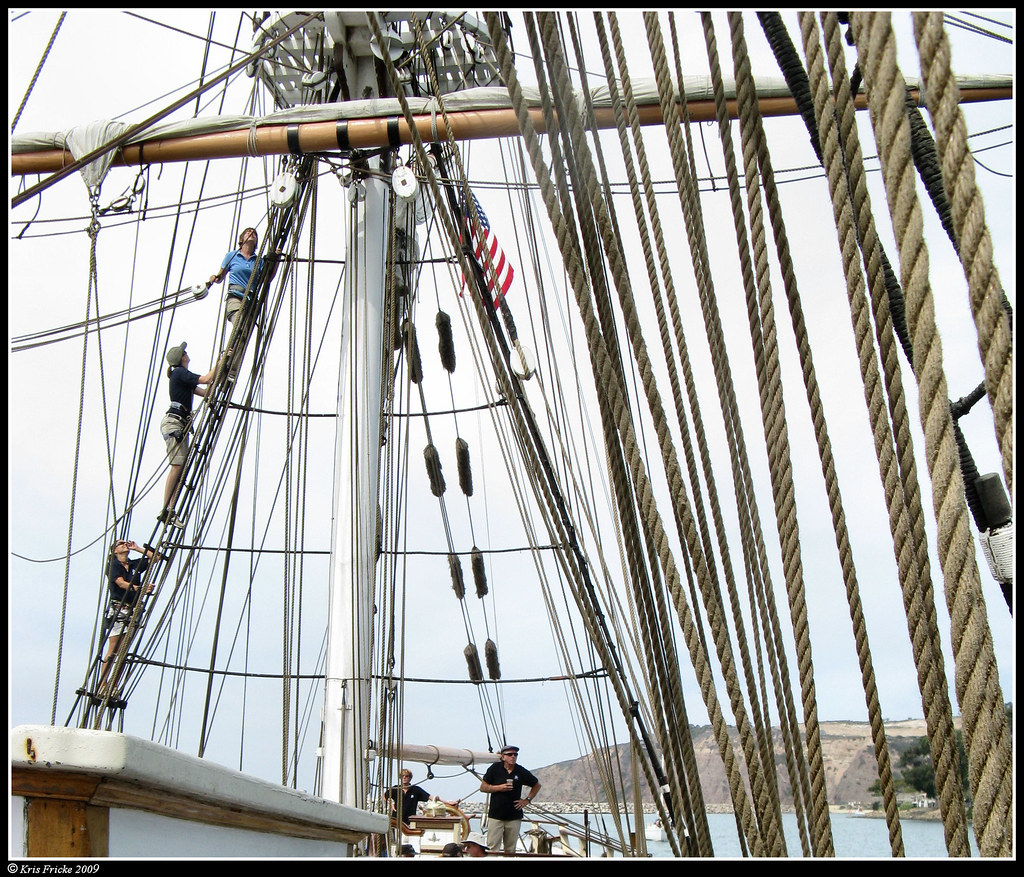 People going aloft on the Pilgrim
Seeing that limp flag I bet they're going up with flagrant disregard for windward!
And look how little the captain cares!
A picture from several months ago
Tags: hawaiian chieftain, sailing
Subscribe