It's Sunday, which means it's once again time for the weekly issue of Shit You Don't Care About stuff I feel like posting in flagrant disregard for how much you want to read it.


Song Lyrics of the Week
Item the first, song lyrics which I find clever / amusing!

This week I will bring you two that are both political satires.

Against Me! - From Her Lips to God's Ears - By the excellent punk band Against Me! Well because the brilliant chorus of "CONDOLEEEEEEEZA!" repeats so much, just looking at the (lyrics) doesn't properly convey how awesome the song is, so you should listen to it instead.

Corb Lund Band - Student Visas - Corb Lund is a Canadian who normally sings countryish songs, often the kind of countryish songs I actually like. So I was kind of surprised when I was perusing his songs and came across this one. It's still kind along that melancholy country vein, but it's about being U.S. "black ops."
It's a nice song and the lyrics are well composed and tell an interesting story. I think it's definitely worth a listen. (Apologies that all I could find to link to is a live recording.)

They took away our dogtags, they had us grow our hair
They gave us student visas when we were over there
They staged us out of Hondo al este del Salvador
I guess you'd call us Contras but no one calls much no more
There ain’t no fun in killin’ folk and I don’t wanna do no more

My great great rode at Shiloh and Grandpa drove a tank
Daddy was air cavalry, flew choppers in the Nam {Da Nang}
I worked mostly clandestine, the branch I should not say {CIA}
We played with better guns and I could use the extra pay
Did Reagan give the order? Did cocaine pay the bill?
They said we's fightin' communists but it was kinda hard to tell
There ain’t no fun in killin’ folk and I don’t wanna do no more

This was before Blackhawks and RPGs were king
My buddy on the door gun, he never felt a thing
When our Huey caught a rocket and both the pilots killed
And it pitched us over sideways on some Nicaraguan hill
My back felt like it’s broken, my legs I could not feel
I kept on shooting communists but it was kind of hard to tell
There ain’t no fun in killin’ folk and I ain’t gonna do no more

I never did heal up right from injuries sustained
Officially in Germany, officially while we trained
I remember all their faces, I dream about them still
I guess we's fightin’ communists but it was kinda hard to tell
There ain’t no fun in killin’ folk, and I don’t wanna do no more

I speak the cold logistic that warriors speak so well
Foxtrot tango whiskey alpha golf tango hotel
A soldierly bravado, an unspeakable guilt
That village, it was communist but it was kinda hard to tell
There ain’t no fun in killin’ folk and I don’t wanna do no more
Believe me, I’ve done plenty boys and I ain’t gonna do no more
But of course if they back me in the corner they’ll be dead before they hit the floor

If this link still works, Student Visas should be among the songs included in the file (special thanks again to

In other news, since my last music post I've discovered Pandora.com, which is much much better than last.fm. The only downside is you can't make it play a specific song on purpose so if you decide you liked a song and want to hear it again, you gotta go elsewhere to find it, but it is much much much better at finding songs you like. I had to skip past some 80% of the songs last.fm tried to recommend to me, but I find myself givings thumbs down to probably less than 5% of what Pandora tries to recommend to me and have discovered more new songs I like than I could even list here.

I'm not sure this will display for those of you who are not me (which is hopefully at least 75% of the people who are reading this!) -- the station I created: And the Kitchen Sync. Oh ho ho I'm so witty with that name. Anyway you should heed my fascinatingly good musical taste and consider everything I seeded or thumbs-upped in there to be excellent.


Dreams
And now let's psychoanalyze two recent dreams I've had so we can properly gauge the no-doubt dismal state of my mental health, no?

Friday Night - I fall asleep after returning home around 5am from my friend Alex's family's mansion. In my dream I'm running from the law and hotly pursued. I'm running across a series of bridges with people close behind me attempting to apprehend me. Eventually I'm caught and handcuffed while struggling.
Next thing I know I'm at my parents house, apparently free to roam the house at least, but awaiting sentencing and sure to be found guilty and sentenced to ten years or so. My whole family is present and hanging out in one of the rooms and while polite to me seem to rather I stayed away from them.

Interpretation: While here for the holidays my brothers gave me endless amounts of shit for allegedly being useless and not working. Despite that I'd been working full time prior to my recent adventures and said adventures were entirely paid for by money I had earned myself my brothers would have you believe I was an absolutely worthless waste of space. So I think the dream represented: while I was running from he law - having fun doing what I want though others would have me feel it is condemnably wrong; and the upcoming prison sentence - that I start work at a law firm on monday, something that is boring and makes me feel rather caged in, but will satisfy the family elements beliefs as to what they think I should be doing.

Saturday Night - I get to bed around 2am after a night of drinking in the shitty local bars with Alex and her roommmate. The earliest part of my dream that I remember, I am waiting around in a hotel lobby, and it is dark and snowy out. The hotel lobby reminds me a lot of the hotel lobby I waited around in before being able to leave Aberdeen, and, as somehwere in the dream the nearby town of Hoquiam was mentioned, I believe it probably was that hotel lobby. It had more people coming and going though than it had in real life, and in place of the cute girl who had been working there (who I really ought to call before she forgets about me entirely eh) my ex Kristy is working in the lobby. Weird.
I leave the lobby and am headed somewhere several towns over, possibly mirroring my actual trip from there via bus to Seattle, except I am traveling by foot and there is a thick snow. Far from being cold and miserable though I am finding the snow exciting and fun. I am traveling with someone about whom I can't remember a single thing (even their gender). They recommend we head to someone's place who has a pool. I'm like "a pool?!? in this weather?!?" and they respond that it is indoors and heated, so we decide to head there (which happens to be in the direction we were going anyway). Then we're crossing a large frozen lake. One can slide along the ice very easily and I am finding it fun. I also start pushing a snowball which gets bigger and bigger as we go until it's bigger than me by the time we're reaching the far side. Then I wake up. 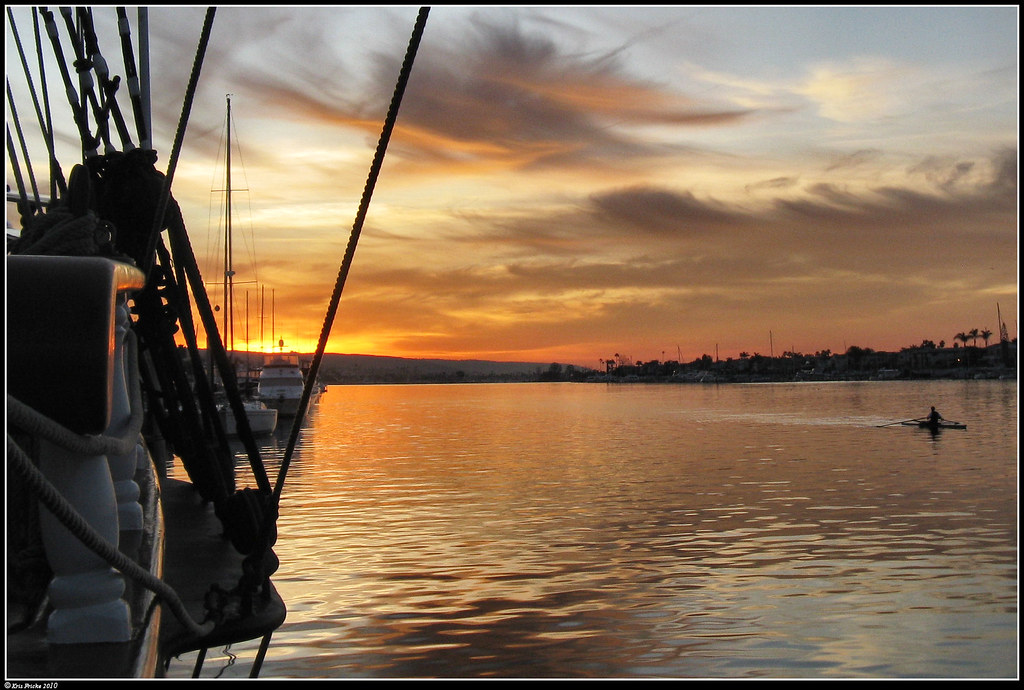 Sunrise in Newport Bay,
From the deck of the Hawaiian Chieftain
(a larger crop of same)

And now I need to shave off my muttonchops for to be presentable to work in the law mines Monday morning ):
Tags: dreams, music
Subscribe