Back to the Pilgrim

"Oh look, it's the redcoats!" says Russel. I look down, and some 80 feet below us, on the shore, there sure enough are three people in "redcoat" uniforms with tricorne hats. Shortly they begin a fifing. "Redcoats!" I exclaim. What an amusing turn of events.
Redcoats aren't a regular occurrence on or near the Pilgrim, but they tend to turn up on special occasions. In this case there was some kind of event afoot that was happening either elsewhere, later, or both. Their presence is kind of shlocky, in my opinion, since the historic Pilgrim had nothing at all to do with redcoats and likely was never near them (being engaged between 1825 and 1856 in trade in the Americas). The historic Lady Washington, on the other hand, did fight in the revolutionary war .. but it doesn't have redcoats. Anyway, the Pilgrim management seems to have no qualms about playing up people's "it's a pirate ship!!" ideas, and for things like the tallship festivals they put a bunch of actors in redcoat uniforms on the boat and act out a skit wherein pirates take over. So looking down and seeing redcoats was a very "aw, I'm back on the Pilgrim!" moment for me.

The Pilgrim has a lot of less frequent volunteers, who typically only turn out on Saturdays for work parties, and this is when most of the maintenance gets done. Consequently, compared to the constantly-maintained Lady Washington and Hawaiian Chieftain, I was taken aback by the flagrant need for maintenance obvious on the Pilgrim. I didn't remember it being in such bad need of repainting. And the brass! I had to immediately find some never-dull and obsessive-compulsively polish the bell. I'd say they should just loan out the boat to a crew from the LW & HC's mother organization (the GHHSA) for a month or two so that it would get caught up with maintenance ... but then I remembered the Pilgrim is barely seaworthy anymore (in need of major repairs to the hull due to rot. We still take it out but not very far or long).
It was also nice to actually have people about that I now know more about seamanship then. Having been consistently the newest person on the LW and HC I was always the one who didn't know things, it was so refreshing to realize someone's asking me where the braces are, or that someone needs to be shown how to make a gasket coil, etc!

The general standing orders given to new volunteers on the Pilgrim are: "mill about." A great deal of this occurs, but people also hop to on any maintenance projects that are being worked on. So things get done, and if you're looking to work you can stay busy, but absolutely no one is breathing down your neck. You could mill about all day and probably no one would look at you sideways. The volunteers typically consists of about a dozen and a half to two dozen persons, many of them retirees, so this laid-back atmosphere keeps them feeling like it's a thoroughly fun way to spend a Saturday morning.
In contrast, when we're at sea the organization is more regimented than on the GHHSA boats. Everyone is assigned to a mast and each mast has a "mast captain," whom once orders are relayed from the Captain through the first mate the mast captain makes sure every individual on the mast is doing the right thing. On the GHHSA boats no one is assigned to anywhere -- when the first mate gives the orders one just runs about getting in people's way until everything is manned by someone. Eventually the crew sorts itself out and people figure out where they usually go and where other people usually go (for example eventually I was always the port side braces and usually the forward leading (mooring)line, though sometimes the after leading).
Saturday I got to climb around in rigging extensively, as we were derigging the christmas lights. It was a beautiful warm day, making it positively delightful up there.


Goodbye the Hawaiian Chieftain
Went over the the Hawaiian Chieftain to say goodbye to them, since they set sail back north this morning.
Boat was lookin crowded, with four passeners who'd be on for the transit already aboard, as well as (at least?) two new crew, and a few more old crew also visiting.
I found a number of crewmembers watching clips of "so you think you can dance" (or "dancing with the star" or ONE of those shows anyway) on the captain's laptop. Inspired, there was then some swing dancing in the main hold. Then Irving Johnson's classic "Around Cape Horn" (again I can't recommend it enough) was shown in the aft cabin for the passenger's benefit, and number of us sat in to watch it again. Only after one of the crewmates made some comment about "Sunday? We don't have sundays here!" did it come to light that one of the passengers is a pastor. Oops.
Then we all hung out and chatted until one by one people snuck off to bed. I said goodbye to the boat and disembarked the sleeping vessel. 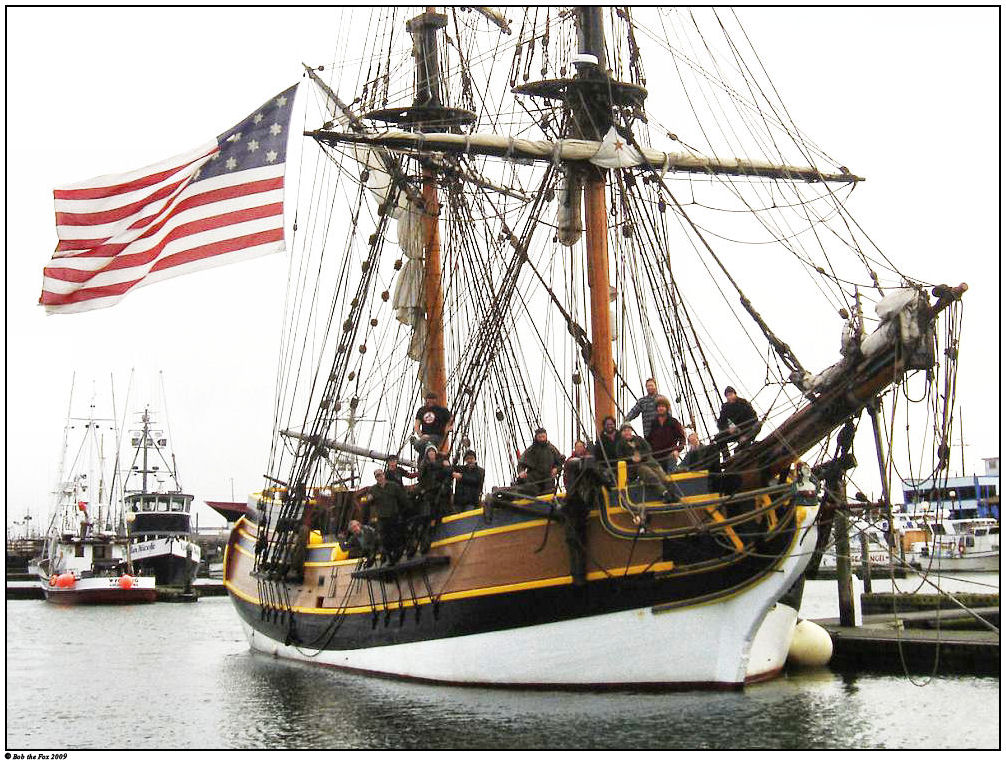 My crew on the Lady Washington, Westport, WA
That's me on the bowsprit.

Not my picture, "Bob the Fox"'s .. hence the inverted border!

Sailors like to refer to large sail like things as sails. Hence our giant 13 star ensign was referred to as the "flags'l," and the rain tarp we had over the deck was the "tarps'l." Later on the HC someone mentioned a "shades'l" in a story. I tried for a moment to figure out what the hell sail a "shadesail" was and then I realized, it was probably a tarp put up for shade.
Tags: brig pilgrim, hawaiian chieftain
Subscribe