New York, last November -- Sometime around midnight, I'm sitting in a bar somewhere in Brooklyn. My ex Kerri is sitting next to me and a guy who looks specifically like a douchebag yutz (a doucheyutz, if you will) is gratuitously hitting on her. Next to Kerri is her friend Claire, being hit on by some guy with a bushy beard. To my left on the other hand is a friend of Claire's, a girl who is decently attractive, single, and doesn't seem uninterested in talking to me. It's got all the right ingredients to spell out three happy couples, at least for the night, ... but I really just can't be bothered to put an ounce of effort in. Further the way the two lads are hanging onto every word the girls let out of their mouth like it's the most fascinating thing they ever heard is just sickening.
Needless to say the girl presently went home for lack of attention, and I got to entertain myself in the lads' livingroom for the next 20 hours while the girls shagged their brains out. Eventually I decided Kerri's lad was actually a more meritorious person than her and was waiting for him to turn up as a friend of Kerri's on facebag so I could friend him too.. but they never did.

It's been three years since I graduated college and moved back to Orange County (and Kristy broke up with me), and during that time I haven't met a single girl here worth dating. I don't even remember what it's like to get those butterflies or caterpillars or stinging wasps or whatever it is you're supposed to get in your stomach when you're utterly smitten by someone.
"I'm so nervous! Are you nervous??" asked this lass Amber, during possibly the only date I've been on in OC in this time. No I really couldn't say I was a lick of nervous, but I did find it terribly endearing that she was getting all meta and breaking the fourth wall, so needless to say the date ended in the back of my car (and that's how I met Officer Terribolsi, a police academy classmate of my brother)*.
Then I went to the Middle East and she was engaged by the time I came back.

That's not to say I haven't dated anyone at all, just no one in this god forsaken cultural swamp known as "Oh See." I dated Kerri, who lived some 300 miles away in Flagstaff Arizona, Marla, who lived some 300 miles away in Davis, and the delightful miss Stacey, some 300 miles away in Santa Rosa. Apparently 300 is the magic number.
With Kerri things eventually fizzled when after months I still wouldn't agree to any kind of a relationship, so she started dating some douchebag with dreadlocks (I bet he was even a vegetarian, that scoundrel!). Marla broke up with me after I passed through her town and neglected to drop her a line, oops (and ended up dating some utter shlemiel). And Staceytoes, we actually managed to seamlessly transition into just friends (though she still reminds me she's never going to snuggle with me ever again, rude). 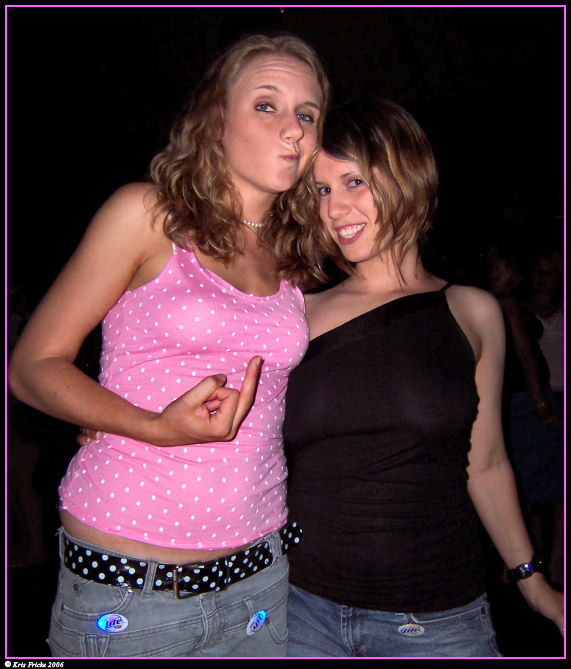 It's not that my love life is entirely marked with apathy, just that I so seldom feel any spark at all. I start to forget what it's like, or that it can even happen.
Once upon a time in 2003 my friend Kristy was trying to set me up with her best friend Sashie, with limited success. We were all at a party at Sashie's place, and Kristy had gone missing. Sashie and I were in her room, possibly having just had a first kiss (I don't know, I don't think I was paying attention), when someone exclaimed that they could see Kritsy drunkenly wandering down below. I remember I was off like a rocket bounding down four flights of stairs to go find Kristy. Kristy had a boyfriend then, but some six months later when she didn't we'd find ourselves dating.

I see fellows like those two skeezballs in NY, or say my friend Mark on any given night, with the ability to make the conversation and sparks fly with almost any girl and I wonder if there's something wrong with me. Should I be makin fire myself instead of just waiting for a spark to just happen to be there? Am I just unusually crotchety? Is the problem my black little heart of ice?

But then, every now and then, I meet a girl with whom the conversation does happen to fly whenever we talk. It comes out of the blue, from someone I was never looking to fancy even -- so very very inconveniently far away. Nevertheless, now for only the third time facebook indicates I'm in a relationship. The second time was entirely an April fools day joke. This time it started out as a joke, I think. We pitched it to eachother as a joke I think. But neither of us knows anymore... it's well, it's complicated.
But

whirled is coming to visit in March, and after some shinanigans around this side of the United States we're going to go to New York and have shinanigans over there. We're going to have tea with destiny, and maybe even tea with Tea and Destiny. Maybe we'll even go to seedy bars in Brooklyn full of shlemiels ... but I doubt I'll have any trouble with a conversation this time in New York.