Tuesday morning I happily left the office --where the boss in a relatively random rage was making vague threats to fire people and had unplugged the internet due to paranoia people were "fucking off"-- and proceeded to the bee yards to collect the last of the equipment
The area seemed relatively deserted (using my sleuthing skills I took note that the horses were idling about in the middle of the meadow, whereas if the owner wasabout they often migrated towards him, and there was no trace of the dogs that usually accompany the owner and can be seen/heard bounding around anywhere within several hundred yards of him), and on any account it may be the last time I'm ever out there, so I decided to do a thorough investigation of my surroundings!!
Checked out the bell again, took some pictures of the castle from other angles because a few people have asked about it. Ventured over to the graves, took pictures of the cannons, noted that the open gave was still sitting there, open, inviting, waiting. 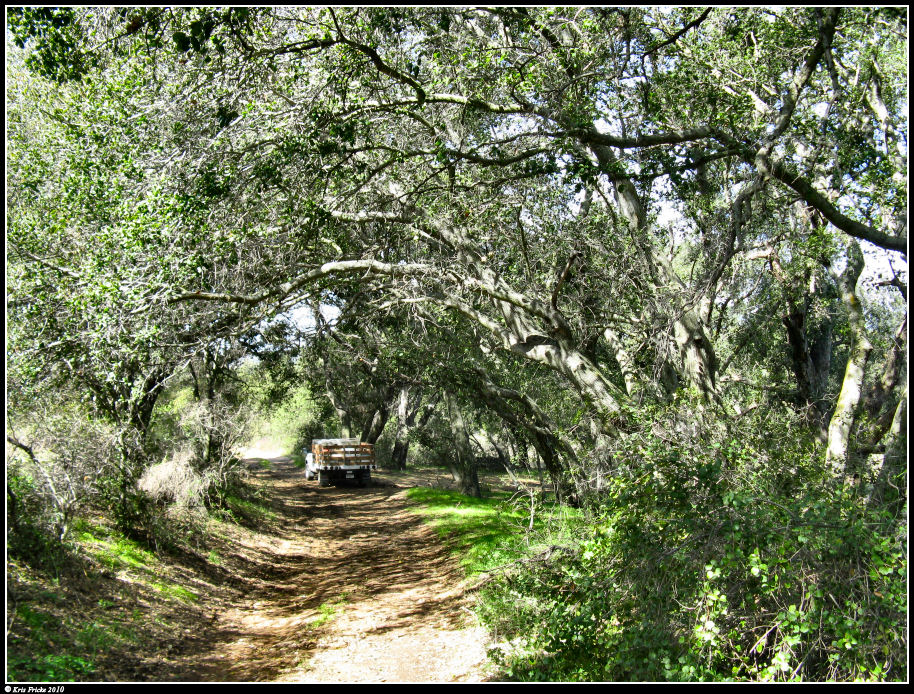 Pictured above, the truck loaded up on the road right beside Bee Yard D. If one were to turn around head down the road in the direction we come and go it would look like this.

But before scurrying off I had one more thing I needed to do. There's one corner of the whole meadow I'd never ventured into. From the satellite view it looked lush and promising of holding secrets. However there was always evidence of activity in that corner. At first there's been tents there all the time, later a shack turned up (it's possible I hadn't noticed it before? I'm not sure), but things were always moved around there a bit so I felt like maybe people actually lived in that corner or something. We assumed they were tweakers.

However, as noted, on this occasion the entire area seemed completely quiet. Additionally I reasoned that if there wasn't a car there, there presumably wouldn't be people there, because even tweakers need to get around! And anyway I was feeling "now or never!" so I ventured into that corner.
Strange things strewn about. Metal drums, paint cans, wheelbarrows. The structure there turned out to be a small cottage, perhaps the size of a large shed. Its back was facing myself and the road.
Coming around the front I'm surprised to find the door wide open and inside it is not a empty shed but actually a clean an well kept habitation. A bed is folded up against a wall, various personal effects are set carefully about. A beer bottle lies on its side on the floor and a crisp clean cowboy haw sits on the chair.
This latter kind of creeps me out because though I've seen no evidence of anyone it seems representative of someone returning any minute.

I quickly egress and look about. There's a little lawn in front of the cottage (that being this side that's further from the rest of civilization). There's a picnic table in the middle and around it it is surrounded by thick impassable tree-high foliage. That is, except for a tunnel-like path into the foliage at the end furthest from civilization. AHAH, that is exactly what I'm looking for.

So I enter the foliage tunnel and it twists and turns up a little canyon, crisscrossing a little steam. I actually took a little video of this but apparently I fail at taking video and held it angled too much at the ground so you don't get the feel for the awesome tunnelness which I was aiming to capture.

Just when I'm starting to think this trail is just more and more and more of the same, it is suddenly as different as can be. Suddenly I pop out into a very unexpected situation

Suddenly the foliage opened up to a vast desolate wasteland. Blackened trees reached for the sky like twisted fingers, dust blew forlornely along the barren ground. HOLY CRAP! I wandered amongst the charred desolation. It must be the location of that fire
I climbed to a nearby ridge. It looked like it covered a blobular area approximately a mile across. Clearly there was only one course of action to take now .... EXPLORE THE WHOLE DAMN THING!! :D

I hiked through the blackened shrubbery along the ridgeline closest to the meadow I'd come from observing the landscape from the various peaks. Then I walked down to the middle, of the area, which happened to be the bottom of a little valley. Here I found a babbling brook and a number of still-standing trees , leading me to suspect maybe the fire started with someone camping here. Looked like it probably had been a very pleasant place to camp. Additionally if the fire had started here, it wouldn't have been a raging inferno yet, hence the non-incinerated trees. Hoped to find a firepit or something but no such smoking gun existed. So much for amateur fire forensics.

Wandered up to a ridge on the fire side of the little valley to check out the vantage point from there. Among other highlights I found a few animal bones, what looked like had been a garden in what must have been the middle of nowhere (chickenwire meshes in little circles the way people use them to protect little plants), and where the wild pineapples grow!! Okay they're probably not pineapples but they kinda looked like it.

After wasting an hour or true trudging through this desolate wasteland I decided it was time to return to civilization and made my way back into the green tunnel-path and back to civilization.

On the way back I stopped at the "Candy Store" on the highway, where I'd had delicious biscuits and gravy the other day. This time they had spaghetti with delicious meaty homemade sauce :d
Subscribe