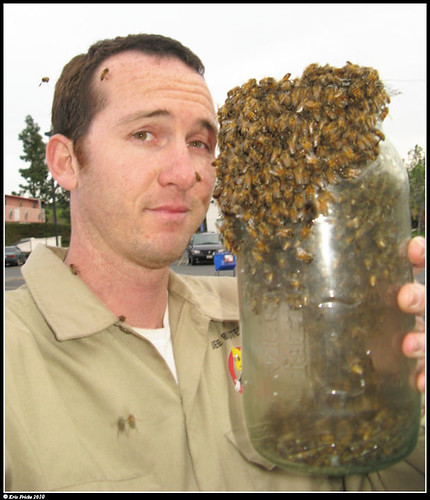 "Bees in a jar??"
"Yep, some film crew called and they want us to put bees in a jar"

I didn't know then why they wanted to put bees in a jar, and, frankly, after having seen the shoot, I still don't know what the hell bees in a jar had to do with anything, but hey.

They had already called some other beekeeper, earlier, who did bring them a box o bees, but had no idea how to get them in a jar and eventually left without doing so, leaving this production staff member with a box o bees in his apartment.

But, then they called us, which was a good move on their part, because there's nothing we can't do with bees. Jar o bees? When and where!

It also so happens that we're always inventing things. The bee control side of our business was among the first in the industry to use hand held laser thermometers to find colonies inside walls by the temperature spike, as well as several other devices and chemicals. I've posted a few times about various things I happen to be researching that day (most recently, for example, new biological control methods vs ants, & the finer points of earwig biology). The astute reader may also recall I've made a few vague references to ongoing research on a new "bee vac," construction of prototypes of such going on in the background, etc. This, it so happens, is the key to BEES IN A JAR. 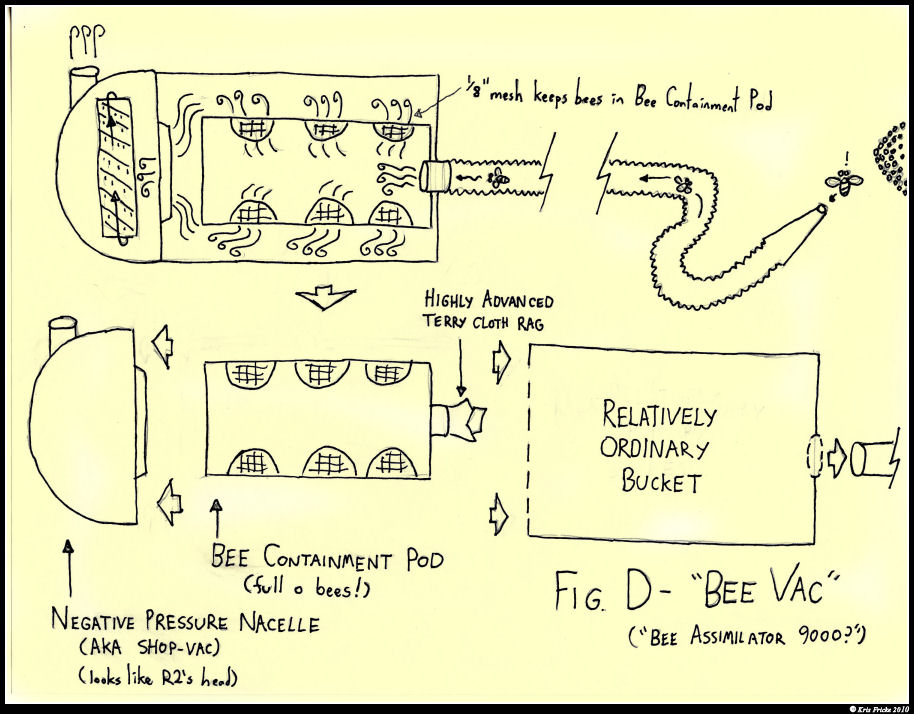 I introduce to you: THE BEE VAC (patent pending!). Beekeepers have been hoovering bees into things for many many years now, but I'm not sure a beevac has ever been designed and built that is quite so... complicated. Usually it's simply a vacuum that leads into a bee receptacle. The removable "Bee Containment Pod" --as I like to call it-- is incredibly handy though. Sometimes you just need your bees on the go! 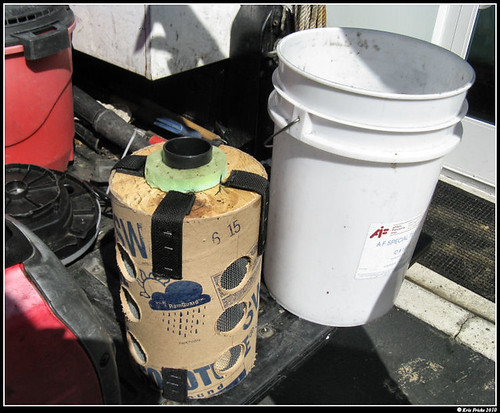 In the above picture you can see latest prototype Bee Containment Pod (BCP?), which is the one I used in this mission. It is upside down in this picture (note that the entire bottom comes off, allowing one to disgorge the contents). To the BCP's right is the Relatively Ordinary Bucket and mostly off frame and upside-down to the left is the shopvac head.


Film shoot was at 3pm on Friday. That morning my boss Dave and I leapt into the beemobile when a call came in about a swarm in a park and vaccuumed them into the Beevac.


Several hours later I show up to the shoot with several thousand aspiring actresses in a canister. The shoot is taking place at a dollar bookstore, and I have to wait through several other scenes. It's apparently a film student's final project. The scenes I see prior to the bees seem to involve a couple arguing.
Because the jar is badly ventilated I don't put the bees in the jar until I'm told the bee scene is coming up. Even then I don't put the lid on them until the last possible minute.

As you can see from the video, the secret to placing bees in a jar is thus:

One will want to do this far away from anyone else, since, for god knows what reason, many people do not actually enjoy being surrounded by mini-aerial-kittens. At first everyone from the film crew gave me a very very wide berth, but eventually some were overcome by curiosity, and observing that I obviously wasn't getting stung, ventured to come over and meet the bees. After observing the bees up close for awhile and talking to me about the Everything You Ever Wanted to Know About Bees several were definite fans of our little furry friends.

Finally the call came out for the bees. I picked up the jar, gave it a little jolt to knock the bees off that were hanging on the piece of screen I'd placed over the top, and replaced the screen with the lid. The lid had several holes punched into it for ventilation but this was very clearly insufficient -- the temperature of the jar rose ten degrees in thirty seconds and condensation began forming on the sides.
Fortunately by now several film staff members genuinely cared about the well-being of the bees. When it turned out the bees weren't going to be on stage as immediately as thought, one of the newly converted bee enthusiasts (I don't know shit about film staff positions but her card says Producer, so lets call her that) had the jar given back to me to be un-lidded until the true last minute. 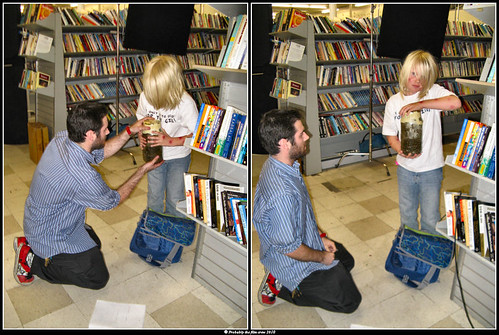 Pictured above is relatively what it looked like when the bees were used in the shot. Here he's just practicing taking it out of the bag, in the actual shot that other fellow wasn't there. In the scene, the protagonist couple is standing in the bookstore aisle discussing something when the kid happens along asking them where he can find diphenhydramine (which he reads off a piece of paper)(which you may recognize by its more common name, benadryl). They ask him what happened, he shows them the jar o bees, they say "wow uh.. you probably shouldn't do that," and he shuffles off.

Once the bees were done shooting I hurried the bees back out to the truck and released them back into the Bee Containment Pod. Casualties hadn't been as high as I feared and there wasn't any evidence of any large scale death when I transferred them from the jar to the canister.

Said goodbye to the staff I'd met, collected my pay, and the bees and I were headed back to the bee cave. Hopefully we'll be able to situate them in a hivebox and they'll live out their days doing everything bees love to do, occasionally telling their grandkids about the time they were moviestars.