"According to Albert Einstein, if bees were to disappear, humanity would follow within four years."


Flowers go unpollinated, vast agricultural fields lie completely unproductive, humanity starves. And it's going to happen. Isn't it? We've all seen one if not all of the above three quotes multiple times in various reputable sources, and it pretty clearly spells out the upcoming bee apocalpyse (apipocalypse?).. doesn't it?

Native Americans had been living happily off the land for as long as any of them could remember when the first Europeans arrived in their caravels. One can easily imagine the amazement with which the indians first beheld the great wooden ships. Tiny by today's standards, each one would have been bigger than anything the local indians had ever seen constructed. And the bizarre people that came off these boats, for all their magical technology, seemed shocking daft in other ways. The natives easily found all the food they needed in the surrounding forests, but the newcomers just ate what they brought with them and nervously waited for more supplies to arrive from across the sea.
One thing the Europeans did bring which the natives called "white man's flies." They vaguely resembled flies the indians would have been familiar with, but lived in little wicker huts in colonies of tens of thousands, and could each deliver a painful sting! But furthermore, the colony produced a delicious sweet substance called "honey," what madness is this?!
The European colonists shortly learned that, shockingly, they could farm this side of ocean as easily as the side they came from, and began to come in increasing numbers. The honeybees, as honeybees do, also expanded their colonization, establishing wild colonies in trees in expanding area outside the European Human settlements. It is said that the Indians began to see "bee trees" as a telltall sign of an approaching European settlement whereever they came upon them.
Gradually the honeybee range expanded to include all of North America. Gruff mountain men of the mid 19th century who lived off what they could hunt and forage for months at a time out trapping in the wilds became adept at raiding bee trees for their sweet bounty.

The native Americans seemed to get along just fine without bees though.

Coming up over Tejon Pass into California's Central Valley sometime around 4am on February first, the driver of a bigrig tractor-trailer with hundreds of beehives strapped to a flatbed trailer drifts off to sleep for a moment. In that moment the cab drifts off the side of the road, jack-knifes itself on the steep decline and the whole thing tips over across Interstate 5. Hundreds of beehives shatter on impact with the road, others bounce along for awhile, spilling out angry bees as they go. Thick gooey honey also spreads across the roadway.
The entire highway has to be closed down for hours while firefighters and hazmat teams attempt to deal with the mess (by hosing down all the bees with foam and using bulldozers to push the debris to the side).
Every year beekeepers from all over the country converge on California's Central Valley for the almond pollination season. Almond pollination is one of the most lucrative things one can do in beekeeping. All the contracts traditionally begin on February 1st, and bees are generally driven at night to keep them from overheating / freaking out other people on the road. It's a long crazy adventure loading up a truck of bees, driving them all night, and unloading them the next morning. Just about every year there is a bee truck crash somewhere on the Five.

Some beekeepers, you could say, lose 90% of their bees to automobile accidents. Every year some also lose 90% to bears or skunks.

For most of the 20th century, a beekeeper could expect to lose about 6% of their hives on average every winter. In the mid 90s varroa mites were accidentally introduced from asia, causing the average beekeeper in America to expect to lose 50-60% of their bees every winter for a few years. It is estimated that 98% of the honeybees in the wild were wiped out. For some reason the media didn't seem to really hit on this.
Beekeepers were able to combat the mites with miticides, and quickly developed better ones, reducing expected hive loses to about 16% per winter after that. As to the wild bees, no one was around to give them miticide, so as you can imagine with 98% losses ... they are back stronger than ever. All susceptable bees died and resistant ones survived and now wild bees survive just fine without the miticides the managed population is dependant on.
With the onset of Colony Collapse Disorder, expected winter losses of managed hives is now around 32%. Two important things to note about this number. (A) that doesn't mean 32% were lost from CCD, it means 16% presumably were (the increase over the background loss). (B) The key words here are "winter loss"
Winter is the tough season for beekeepers. Things aren't blooming, the bees are cold, hungry, and cramped together in the hive trying to stay warm. You lose bees in winter. But Spring is boom time for bees. Everything is blooming and millions of years of evolution have taught the bees this is the time to hit the ground moving, to spin off as many new colonies as they can. In spring a beekeeper can split all their healthy colonies and increase their number of hives by a very significant percentage.
And so, what isn't conveyed when you read about "32% losses" is that there was a subsequent 37% gain two months later. In the Pacific Northwest, where CCD has been hitting as hard as anywhere else, there are now more managed hives in operation than there were previous to the "disappearing bees."

The Einstein quote deserves special attention in the examination of media hyperbole though. Why would Einstein say such a thing, if people clearly lived in the Americas without bees and got along just fine? Or, if Einstein did say such a thing, how could he be wrong?? The answer is simple: he didn't say it.
You'll find him quoted as saying this in all kinds of reputable newspapers and other media, presumably they all can simply use eachother as a "source" to back up that he said it, but there's no underlying source. The earliest appearance of this quote attributed to Einstein was on a pamphlet by the beekeeper labour union (!?) in Brussels in 1994. It cites no source and given how carefully scrutinized Einstein's quotes have been I find it beyond unlikely that one of these Brussellian union beekeepers knows something the rest of us don't.

But because the media just loves something that sounds apocalyptic, they keep whipping this "disappearing bees" thing into a frenzy, so that your average person now usually believes "the bees are disappearing."
Why did the media jump on this and not the more serious bee die off in the 90s? Probably because this time beekeepers would agree bees are disappearing -- literally. The calling card of CCD is that the bees from an effected hive have literally disappeared. They're just gone. It is mysterious, but it's far far far from having anything to do with the bees as a species disappearing. 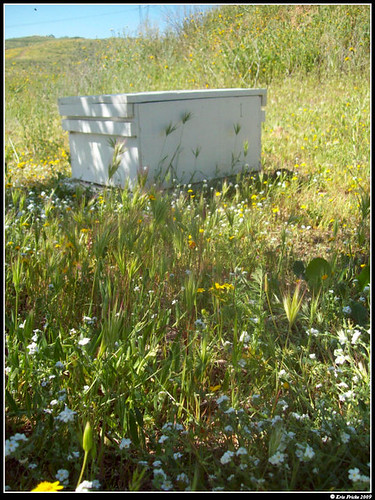