"Kris!" I'm jolted awake from a deep sleep by an urgent voice. In the red glow outside the curtain of my bunk a figure whispers "half an hour till your watch!"
"A'ight, cool" I respond before even really fully awake. I lie there for just a few moments as the gears in my head get back up to speed. I'd been in the middle of a dream about Australian wildlife (wherein the wind kept lifting me off the ground in a manner very similar to the gravitational effects of waves on a boat). "Your watch" means something slightly different this time though. It's not just the watch I'll be standing on, I've been appointed the third Watch Officer, so this watch IS "my" watch.
Scramble for my clothes (all my possessions that are to be easily accessible must fit on my bunk, which is smaller than a twin bed and has maybe three feet of headroom between itself and the bunk above), wiggle out over the lee-cloth (a canvas cloth tied across the entrance to my bunk so I don't get flung out by waves). I find myself in the main hold, a square room with bunks on three walls, table in the middle, ladder (or steep stair if you will, but on a boat everything's a "ladder") up to the deck in the middle, watertight door on one wall. The room is illuminated entirely by red light, since that doesn't effect your night vision. I put on my boots, then strap on my harness (you never know when you'll need to clip in. Rangi claims his harness saved his life when he was able to clip in when a wave roared completely over the boat during "the great potatoe rebellion of twenty one ought"), and put on my peacoat.

"Chi-chunk! .. chi-chunk!" the watertight door makes a heavy noise as a pull the lever to open it and move it again to close it behind me. Here I'm in a hallway leading to the aft cabin, captain's cabin, the two heads (bathrooms), a ladder up to deck, or the watertight door I just came from. Up the ladder and I find myself on deck. It's around 23:45 (or as I like to say, "fifteen jingles until eight bells." Bell time being a traditional thing aboardships, and jingles being my own invention for a subunit of bells, corresponding exactly to the number of minutes), and above me the sky is filled with stars as far as I can see. The sea stretches off into the darkness in all directions, relatively small waves sparkling in the starlight. There's only a light breeze. It is truly a beautiful night.
The three members of B Watch are standing at the helm and con, and the two other members of C Watch are also already up there. Pony, the B Watch watch officer, is a rather large fellow with a boyish good natured disposition. I ask him about the current conditions and he summarizes the calmness of the weather and notes our companion vessel, the Lady Washington visible as only a light way back behind us and to port.

I descend down another companionway (hatch & ladder) into the aft cabin. There I find normal white light and charts on the chart table. In the rough log I note down the time, latitude and longitude from the GPS (yeah no celestial navigation or taking bearings on things for us. We also are running on diesel engines at the time, since we're headed right into the wind), barometer pressure, wind direction and force (force 2), cloud cover, and that the most recent boat check has been done. Then I plot that position on the chart and calculate our "course made good" (the compass angle we're actually traveling), and how it compares to where we should be, and calculate our "speed made good." I enter the most relevant data into the official log, including that "C Watch (Fricke) takes the deck."
After this I pop back on deck and inform Pony we're ready to take the deck.
"Course three three zero" state's Pony's helmsman (Rangi) as he hands off the ship's wheel to Noah on my watch, "course three three zero, aye" repeats Noah.
"B Watch Stand Down!" declares Pony enthusiastically. The time is 00:02.
"If you could, change from three three zero to three five zero, please" I instruct Noah on the helm. Our compass of course doesn't steer on true north and apparently isn't even aligned correctly on the boat anymore after a wave seriously damaged the binnacle during the aforementioned "great potatoe rebellion." However, I can see from our chart that we need to be twenty degrees starboard of the course we've been steering, so the numbers our compass currently displays may be essentially arbitrary but by adding twenty degrees to the course being steered on them should get us in the right direction. And thus we blunder on through the darkness, up the coast of the Olympic Peninsula, past the "Flattery Rocks."

It really dawns on my that I am the Person In Charge when Noah asks my permission to leave the deck to go get a cup o noodles from the galley (Bean, the third member of our watch, has the helm). I certainly never expected to be made a watch officer this soon, yet here I am, entrusted with the responsibility of navigating a 64 ton, 103 foot vessel with ten other people aboard through the night. It's a beautiful beautiful night, life doesn't get much better than this.


A dim glow over the horizon indicates where the light on Flattery Rocks is. It slowly passes by safely over the horizon. During my earlier 1200-1600 watch we were approaching "Destruction Island," just another reminder of how dangerous navigating these waters can be. 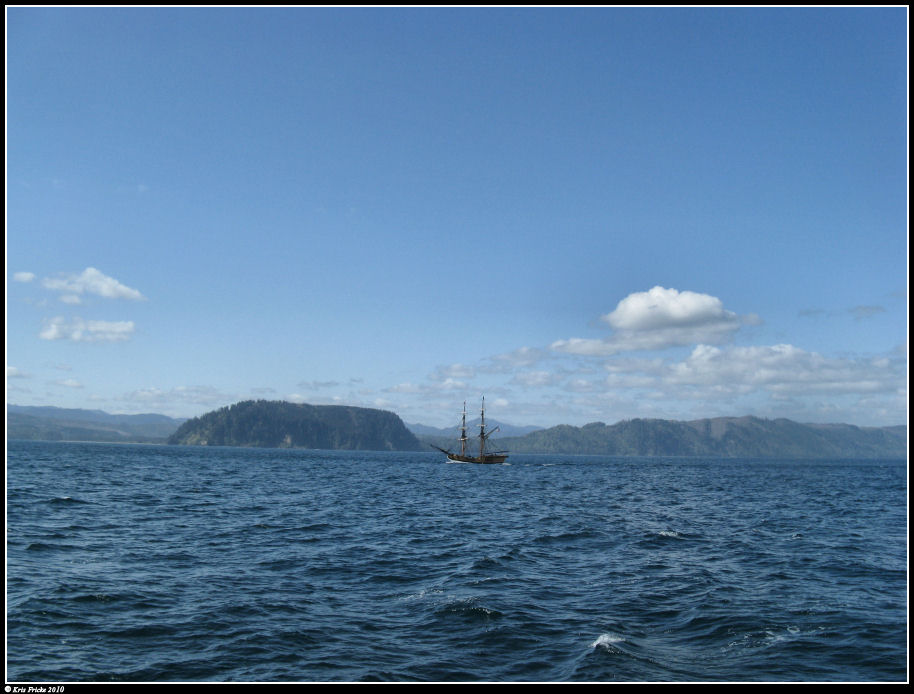 This picture is from later, obviously. Around 1030 the next (ie this) morning. The Lady Washington as seen from our deck, Olympic Peninsula behind her.