"Is it a real pirateship??" asks the teenage girl
"No." says I bluntly.
"Awwww ):"
"It's a merchant vessel" I explain
"Could you make it a pirateship?" she asks
"Uhhhh no we'd get sunk by the coast guard pretty fast"
"What! Really!?" clearly she doesn't get what I'm getting at here.
"Piracy is pretty illegal you see"
"Oh, but is it a real sailing ship at least?"
"well yes." (we actually get this question a lot, and joke amongst ourselves about telling them no it goes around on tracks like in disneyland)

It's not unexpected that everyone thinks we're doing some kind of pirate thing, but it's kind of silly, when you think about it, that any vessel resembling a working vessel from say the year 1000 until the early 1900s people immediately associate with something only a tiny tiny fraction of vessels were involved in between the late 1600s and early 1800s (and it's been experiencing a modern resurgence but people aren't associating motorboats and RPGs with pirates.. yet!). It's like people in the distant future seeing replicas of something from today and assuming it is definitely pertaining to something totally unrelated that will only occur between 300 and 400 years from now.


We call our dock here "the fish bowl." We're moored up to a floating dock that's right beside a raised pier, so the onlookers are actually above us. All afternoon I'm liable to look up and see three cameras pointed at me. During dinner the other day I was eating spaghetti on deck because it was a nice day and while my mouth was full some guy started asking me questions about when we'd be open for tours. Simulteniously his eight year old (wild guess) son tried to board the boat, apparently assuming it was open for tours.
All evening about every twenty minutes are so a camera flash will go off on the pier. It's like being in a lightning storm without thunder. I don't know what kind of shots they expect to get like that. 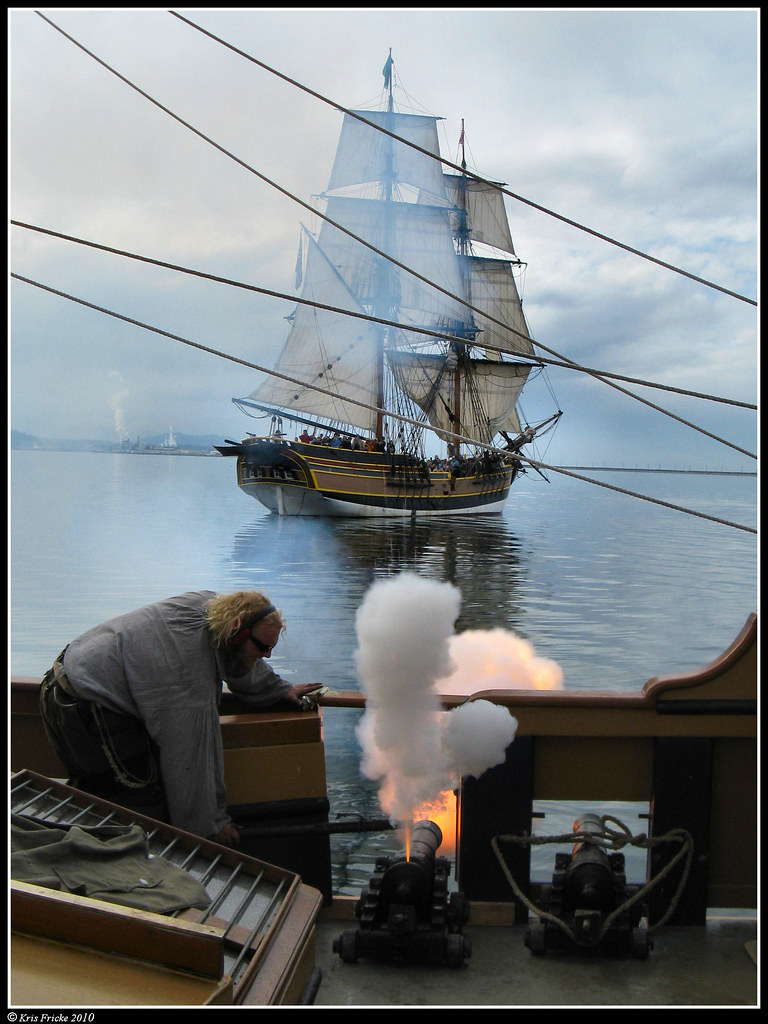 Today we had a "battle sail" against the Lady Washington. Both boats were fully booked (43 passengers each). There was a very very light intermittent rain, though the sun shown down on us the whole time, which was neat. In this picture Pony (the bosun) fires on the Lady Washington. This shot looks to be clearly a miss. (:
Pony and other people who have been around awhile insist that these are NOT cannons but "deck guns," but a brief search of the internet (okay I only looked up cannon on wikipedia -- "any piece of artillery that uses gunpowder or other usually explosive-based propellants to launch a projectile") does not give me any reason to believe these should not be called cannons.
Tags: hawaiian chieftain 2010
Subscribe