A Day in the Life

Day 19: Still no days off in sight. However Knuckles' brother, whom we've dubbed "Fingers" (which will no doubt be a surprise to him), arrives soon to join the crew and maybe then we'll start getting days off.
Today we were just scheduled for crew training, ie no tours and no sails with passengers. We had revielle at 0830, did chores, unloaded about $1000 of food supplies from a sysco truck into the boat, and then it was around 1000. It so happens that apparently we'd been invited to tour the local oil spill response ship, the W C Park Responder. So several of us (and several from the Lady crew) went over there at this point (reasoning it was reasonably nautical as to count for "training"). Fortunately for my curse solemn vow <href="http://emo-snal.livejournal.com/131197.html">not to go ashore</a>, the vessel is, of course, afloat.
Said oil spill response vessel was really neat but then myself and the rest of the Lady crew that was on the tour had to hurry back to the Lady for an ed sail. That's right, the Lady. My boat had no sails today but the Lady did, and as I still have nearly no experience with ed sails and it's my job to lead them on our boat I was voluntold to accompany the Lady out on hers.

Sail was fun. Did as much as I could to observe my counterpart Aaron's ways. Aaron is... flamboyant. In as not gay a way as flamboyant can be. It works well for entertaining the kids but... I am not Aaron. I feel like the organization rather wishes I were Aaron, but I very clearly am not Aaron. I think I'm rather the underdog here ;)

Aaron knows a ridiculous amount about the finer details of 18th and 19th century so I decided to ask him my cannon question (ie many many in the tallship community insist that every gun aboard a ship people want to call a cannon rightfully ought to be called a "gun" and never a "cannon"). I was actually rather surprised when he responded "I DON'T KNOW!!! I too have noticed that in all contemporary sources they're called cannons!!!" If someone brings up the gun thing to me again I might have to throw down the gauntlet and demand they cite a source.

Three hours later we return and I return to my boat to find... they've been "standing easy" for "hours!" By which I mean two people are to be found loafing about but everyone else has run for shore on liberty. We're not "stood down" but only in as much as everyone still needs to return for end of the day muster and official stand down. I go off somewhere else and everyone takes the day off?! Rude!

This evening Knuckles (the cook) brought out the bbq grill (I guess that makes us buccaneers eh?). The steak was absolutely delicious. I went back for seconds, and thirds, and fourths... and fifths and sixths until it was all gone (I made sure no one else wanted any more before repeatedly ravaging it).

Sometime a bit after dinner I returned to the Lady to learn shanties with Aaron and drink rum. After doing a bit of singing I've determined ... I think I'm absolutely godawful at it. Me singing sounds like someone saying a sentence in a loud and vaguely vaguely singsong manner. Moar rum can probably only improve upon this.

Then Aaron and Lady pursar Beth (

i_id) wanted to watch Dr Who. I'd never seen this show and my first inclination was to flee because the fandom of it I've seen on the internets has often frankly scared me. However I thought I'd give it a chance. It was an episode about a future space colony on the back of a giant space whale. Really I don't have any particular complaints with it and thought it was delightfully quaint the way they conjure up that 60s sci fi feel by putting rotary phones on space stations and things ... but I still think the fandom is fucking scary and I'm not about to go all fanboy about it.

Walking back down the dock to the Chieftain, I regarding it fondly as it pitched and rolled happily in a set of rolling swells that had come in and thought about how I'll miss the pitching and rolling when I'm off. The pier lights cast a sepiatone glow on everything and a light rain was falling, as I walked along the dock to the 19th century looking vessel I call home, and I felt rather pleased about all of this. 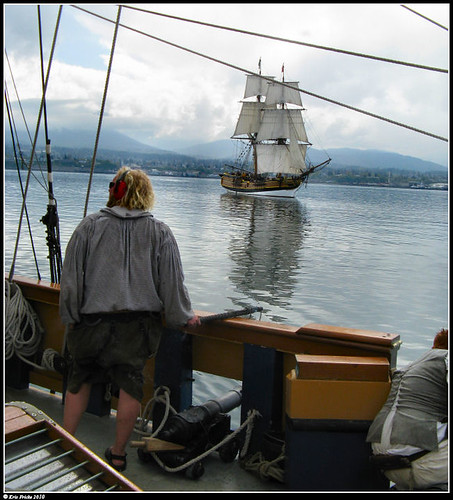 Pony waits for the next shot to line up.

Another picture from the battle sail on Saturday.
I uploaded a number of pictures from that day onto flickr today

Tomorrow we sail for Sequim, WA, a place which is apparently rightfully pronounced "squim" (yes as in "skwim"), sail which should only take 3-5 hours under sail. The day after that Aaron and I apparently both have a meeting in Seattle. Someone from the organization will be driving us the two hours there and back.