53,000,000 years ago - A dog-like creature slinks stealthily among the thick tropical foliage. It balances itself with its thick rodent-like tail while it sniffs the air for signs of prey. It deftly steps between tangled roots with its hoofed feet.

The pakicetus catches a whiff of something tantalizing in the air and raises its nose, inhaling deeply several times. It knows this smell, it is one of those furry creatures with opposable digits -- fingers and toes -- that swing from trees. A tasty snack if one can be found on the ground and snapped up. The pakicetus sniffs in a few directions to triangulate the origin of the scent and silently thinks a moment. From the angle the scent is wafting in from, he reckons there's a good chance the creature may indeed be on the ground.

Stealthily, very carefully moving among the plants so as not to make any noise, the animal moves towards the scent. Salivating with anticipation the pakicetus slows to an agonizingly slow and careful approach as he approaches the prey. It is indeed gathering fallen fruit on the forest floor, but these primates can be devilishly clever. One wrong move and it'll disappear up into the canopy.
Slowly, slowly the pakicetus moves into position, all its concentration on the primate and the planned approach. A bee buzzes loudly by nearby, causing the primate to look up and the pakicetus freezes, terrified that he'd be noticed. The Pakicetus notes that the primate is a young adult female, indexing the complex scents in the air with what he knows about the biology of this particular species. Probably in heat, there's probably at least one male around with intentions to breed. Pakicetus looks around but sees no other primates. Males are edible too but what would have made him really pleased would have been if it had already produced some tasty little primate babies to gobble up. Oh well, this one won't be doing that, thought the pakicetus, who had no intention of just waiting around to let the strange creature propagate. He turns his attention once again fully to making the final approach, crouching low to the ground and licking his lips.

The primate reaches for an early predecessor of what would become an apple just as the pakicetus crouches for the pounce. Suddenly there's a crashing noise from behind. Pakicetus looks quickly backwards with great annoyance, which turns immediately to terror. A mesonyx, a large ugly wolf-like creature with huge fangs is bounding in, flying across the ground with powerful leaps.
The primate screeches and leaps into a tree and is gone in a flash. Pakicetus bounds quickly off to the side but not soon enough to completely avoid being sideswiped by mesonyx's own hoofed paws. Pakicetus scrambles desperately away with mesonyx hot on its heels, attempting to use its smaller size to maximum advantage by darting behind and around low trunks and branches as much as possible. The large muscular mesonyx barrels through most barriers though, proving very hard to shake.

Pakicetus' muscles burn from exertion and its back has been lacerated with the nips and snaps of the pursuing monster. Suddenly it bursts from the forest and finds itself on the edge of a cliff. A hundred feet below, waves lap at the rocks. Glancing up quickly a landscape of shallow sea and islands only briefly register before the pakicetus turns its attention back to its pursuer. The mesonyx has also come skidding to a halt. It realizes a full charge would likely send them both tumbling into the sea and that the pakicetus can't outrun it, so it lets out a growl and slowly approaches to finish the job.
Pakicetus takes another quick wild eyed glance around to contemplate its options. It then turns and hops off the cliff, followed only by an angry roar and fruitless swipe by the mesonyx.


Pakicetus bobs to the surface of the warm sea and realizes he has escaped. He is exhausted but floats well and there is forested island only a short way off, so he uses his thick tail to propel himself through the water. He rests awhile on the warm beach and then realizes he's still hungry. He wades into the water and easily snaps up one of the large fish the sea is teeming with.

He returns to the beach with it in his jaws and is about to send it slithering down his gullet when he sees a shadow among the trees. He freezes. It has that canine gait and tauntingly slithery tail. A mesonyx? Not again??

A female pakicetus emerges from the foliage and approaches curiously. Our protagonist drops the fish in front of her, after all, he can easily go back into the sea and get another one. 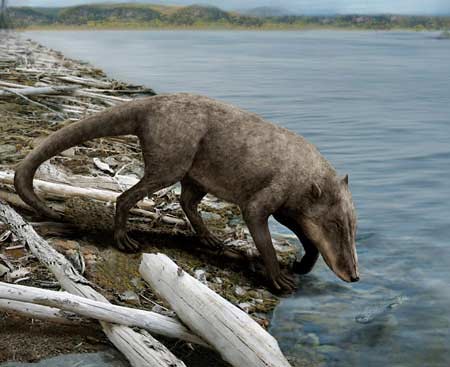