Port Angeles: Port Angeles was a decent place. Decent sized town that seemed to have a fair bit of freighter traffic coming through it, as well as tourism. Downtown was just ashore from the boats and there was a Safeway and convenience store within walking distance, a bar or two, and even a store dedicated to that crap movie "Twilight" !! Didn't experience terribly much of the town because the latter half of our time there I was subject to my vow not to go ashore until I could sing a shanty. As I mentioned the boat was situated in "the fish bowl" where we seemed to be under constant observation like some kind of zoo exhibit. "Staples" on the other boat joked about pretending to be an ape throwing shit at the people on the pier.


Sequim: (pronounced "Squim") I didn't miss out on much because the town itself was several miles away from the marina. We were located in pretty much the middle of nowhere.
Official business did take me off the boat though. My counterpart on the other boat, Aaron, and I had to go to Seattle (two hours drive away) for a business meeting. We went with our organization's Marine Operations Director, Captain Allnut, it was a pleasant change of pace.


Port Ludlow: This cute little town seems to be primarily a retirement / vacation destination and as such there's not much here. No bars, no stores. But it's a beautiful little place so I don't mind at all.
I managed to eke out a shanty (Nelson's Blood) so I can go ashore again, not that there's anywhere to go here.


Friday Harbor: Tomorrow morning we have a "roll and go" at 7am, meaning immediately upon revielle we are casting off and setting sail. Breakfast when we get a chance. Destination: Friday Harbor. I've been there once before and from my recollection it is a quaint little tourist destination out in the San Juan Islands. Most importantly there is good beer there -- there's bars and if I recall correctly there was even a local microbrewery with some pretty good stout!


Seattle: From there we go to Seattle. I'm not a fan of cities but it so happens that I actually have a day off on the calendar for while we're in Seattle! In this case it is good it is in Seattle because I need to get fingerprinted for the Peace Corps and I don't know if these little towns have anywhere I'd be able to get that done on a random day of the week but I'm sure I can find a way to get fingerprinted in Seattle (:
Will only be in Seattle April 30th - May 1st this round, but we'll be back. 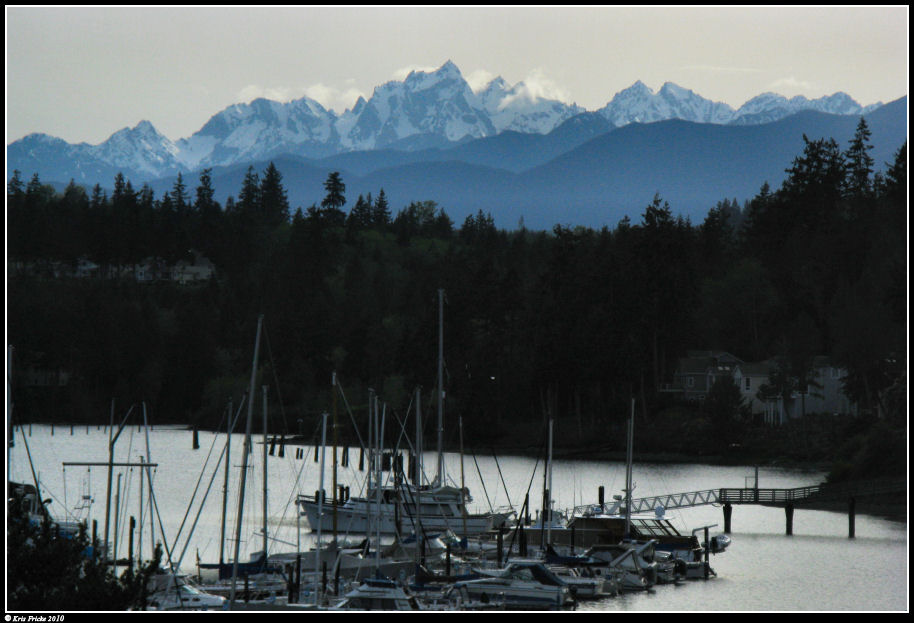 The Olympic Mountains visible over the forested hills of Port Ludlow. I uploaded a bunch of other pictures from Port Ludlow today.


Roll and go is six hours from now, at 0700. This is one of my favourite times of the day, when it's entirely quiet and peaceful and I can contemplate how awesome it is that I live on a sweet boat and am in a beautiful little marina in the middle of a forest. The view from the deck in 360 degrees is mostly forested rolling hills, with the jagged olympic mountains visible over the hills in one direction, a giant totem pole in another, and of course the little bay. But I suppose I should hit my rack.