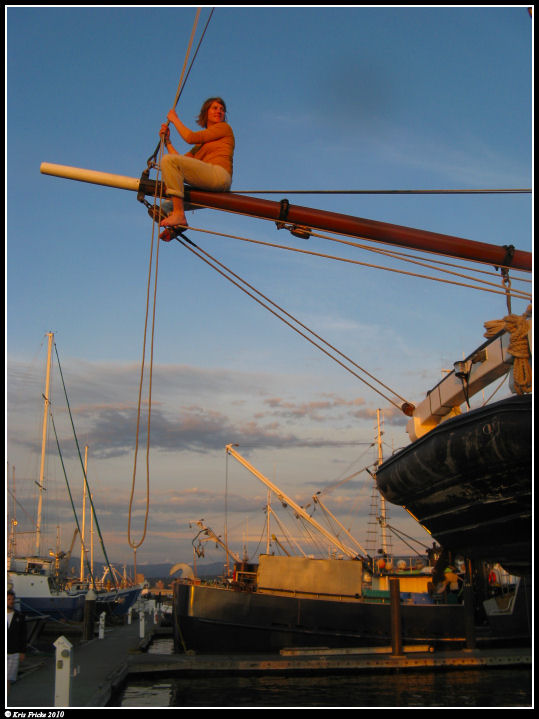 Two weeks ago -- "That uhh, doesn't look safe at all" I say, looking out at the cold water under the mizzen boom. It hangs about ten feet out aft behind the boat, and out at the very end is where the flag halyard apparently gets tied off.
"Well of course it's not safe, this is a tallship!" says the captain, grinning nefariously from the dock. There's no way to get to the end of the boom except to either shimmy out on the boom itself or walk on the running rigging that runs out there, and one generally does NOT walk on running rigging. I don't consider myself very timorous about taking risks but I'm not dumb and that just didn't add up to something that looked safe to me.
Nevertheless there was nothing to do but go out there and attach ye olde Stars and Stripes to the flag halyard and so out I went on that precarious line (but not before emptying my pockets of things that would be harmed by a fall into the cold water.

Later I was in the aft cabin and Jimmy the first mate was there, and the captain came in and crowed to him "I pushed Kris beyond his comfort level today! (and aside to me: "rather on purpose actually") And he rose to it admirably!"


Two days prior to my birthday (ie May 12th or so) -- someone: "George is completely fouled, won't come down" ("George" being the Washington State Flag, which features George Washington prominently)
Me: "I'll go up and unfoul him!"
Captain: "You've already had a beer! (and to the other person) just leave him up for now"

That evening as the sun began to set I donned my harness and proceeded aloft. Up to the first yardarm (the main course yard), up past the lower and upper topsails, up to where the shrouds (ie what you use for a ladder) end. 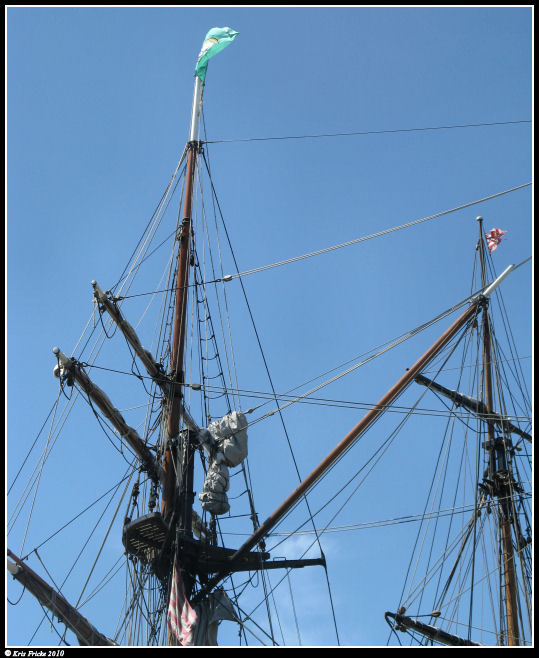 As you can see in the above picture, where the shrouds come together at the mast there is STILL a good ten feet of mast to go!
I' reckoned the thing to do was shimmy, though I'd never really tried to shimmy anything. I climbed up to the very top of the shrouds, wrapped my arms and legs around the mast and tried to do this "shimmy" thing and immediately both my legs cramped up.
I regrouped, stretched a bit, and tried again ... I slid right back down to the shrouds immediately -- I couldnt' get enough traction on the mast!
I stood there looking at the flag. So close and yet so far. I could actually unfoul it from here, but that would be giving up a golden opportunity.
You see, the very top of the mast is called the "truck," and tradition goes you are not a real sailor until you've kissed the truck. There are two impediments to doing this -- (1) it's rather hard to get to; and (2) excuses to go up there are hard to come by! At least on our boat, there's really no skylarking -- one doesn't go aloft unless one is doing some specific work. An extracurricular trip to the truck would be frowned upon. I wasn't about to let this slip through my fingers.
Just above me the stays came together on the mast (you can see them in the above picture as the dark lines that meet the mast right before the white part). They were all also extremely slippery but I figured by bracing myself on two of them, by virtue of the fact that they get rapidly further apart, I should be able to climb higher. So gripping the mast some 80 feet in the air I put first one foot and then the other on the outside of the two closest stay (there's four of them, one from each of the four cardinal directions). One foot on one stay is deathly slippery but being on the outside of two of them seems to work. By so doing I am able to pull myself up the mast until I'm where they meet the mast.
Now I do have a lanyard on my harness which I have wrapped around the mast (like I said, I'm not crazy), but where the stays meet the mast I have to of course unclip it and re-run it around the mast over the clips. This was perhaps the most precarious part because here I found myself gripping the mast with one arm, my two feet on the tractionless stays, NOT clipped in, as with my other arm I run the lanyard around the mast above the stays.
Thereafter it was smooth sailing getting up until I was standing on where the stays meet the mast and was about eye level with the truck. Kiss the truck, savor the moment for a moment, watch the sun set, unfoul George, take the picture you'll find below, looking down the entire mast with the top of the truck in the lower right corner (sorry it's blurry, hey you try taking a picture up there! Plus my camera was whining about a low battery and I was in a hurry to get the shot before the battery died). Getting down was the same as getting up but in reverse order 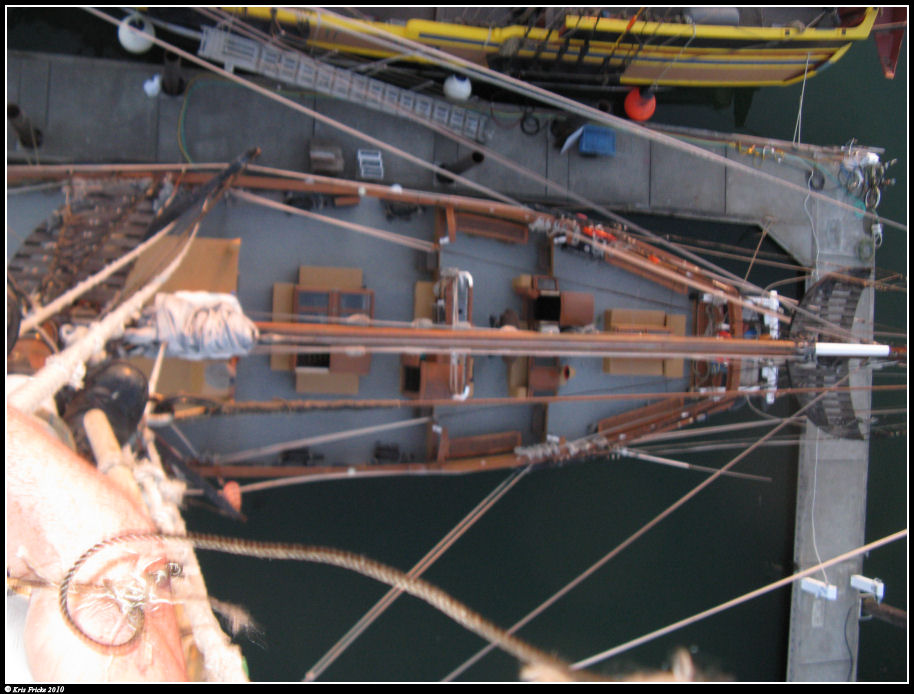 My birthday: "Hey Kris come here!" says first mate Jimmy with a devilish look in his eye.
"Uhh, is something horrible going to happen to me?" I ask with some concern, as he leads me to the side of the boat while the whole crew gathers.
"Yes." he says "empty your pockets"
No sooner are my pockets empty than he picks me up by my arms and Pony picks up my legs, so I'm slung like a hammock between them, and they start to swing me back and forth next to the side.
"Where's the dock ladder?" I ask as if we're discussing the best route into town. Alarming things happen, why fight them?
The crew sings happy birthday to me as Pony and Jimmy swing me to and fro. I contemplate what I'm going to do when I hit the water matter of factly. The song ends and Jimmy informs me "we're not REALLY going to throw you in the water, have you SEEN that water??" and they set me down. I was honestly a bit disappointed, I was ready to go in. But he's right that water often looked pretty gross.