We have a bunch of 18 year olds now who are hyperactive and rather annoying. They don't seem to be able to stop moving around or talking. They're always telling stories no one cares about about something their friend did or telling jokes that aren't funny. I don't know if most 18 year olds are like this or just them ... certainly our Queso is 18 but we don't lump her in the same group because she is not at all like them and quite awesome. They make me feel old though, I live my life at such a slower pace than them, and I find myself grumbling to myself about these young whippersnappers. For awhile I was the oldest person on the boat in fact (and I'm only 28!).

Are all 18 year olds like this or did we just get a batch of hyperactive delinquents? I think one of their primary problems is that they seem to have no conception of whether the story they're about to launch into is of any interest whatsoever to those present.

In other news we're in Olympia now, the capitol of the state of Washington. Very ironically this is the first place we've been that doesn't have shore water or power or facilities of any kind for us. We had these things in tiny backwaters like Garibaldi and Sequim but here in the state capitol we've got nothing but the power we generate ourselves, the water we brought aboard in Gig Harbour, and we'll have to go find a pumpout dock to get rid of our crap.
Olympia is a weird place. It has one street, 4th Avenue, that has a lot of bars and other cool stuff, but surrounding that is just muffler shops and other boring crap. All the locals look like cracked out vagrant-punks. In most towns we stand our for looking dishevelled -- in this town we all look positively clean and straight-laced compared to the locals. 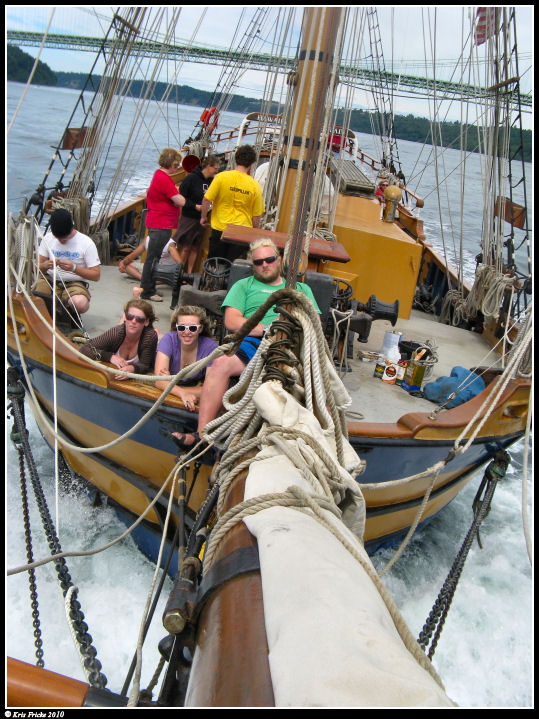 Passing through "the narrows" at 14 knots!
On the left we have the young uns Spencer / "Harry Potter" (white shirt), Britney / "Kid Sister" (red shirt), Mckracken (his actual last name!) (yellow shirt), our new cook Barb in black who seems pretty cool and has saved me from being the oldest person on the boat, and at the bow we have purser Jess, Queso (AKA Kelly), and Pony