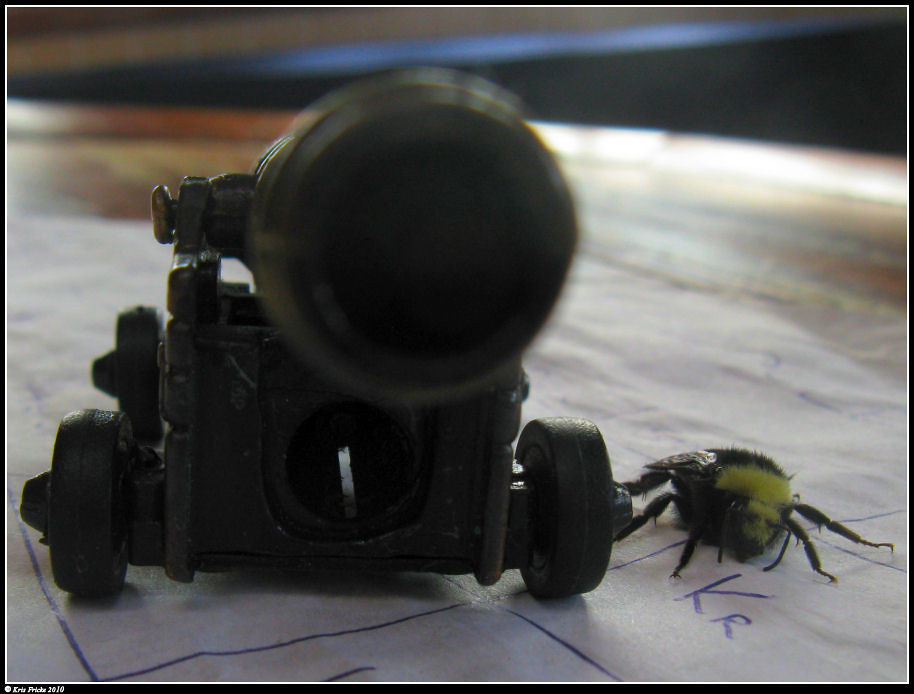 The other day we found two bumblebees mating on our boat. Just a little while later I found a bumblebee crawling on the ground in the nearby parking lot. It was still very mobile but didn't seem to be strong enough to fly any more. Being as it was a fair distance from where I'd seen the other two bumblebees and hours later, I suppose it's unlikely that it was one of the same ones, BUT it did seem about the same size as the male that had been involved and I'd imagine, like honeybees, the male bumblebees probably die after mating (and this one sure seemed like it was on the way out).

So I took him/her back to the boat, and we named it Admiral Buzzington. Took some silly pictures and ended up leaving him/her posed next to the little cannon pencil sharpener all day. Every time I'd check on him expecting him to be dead he'd still do a lively little jig when I touched his foot gently with my finger, but he remained dutifully next to his cannon.

I was planning on burying him at sea once the inevitable happened, but by the next morning he was gone. Some might suppose someone found him dead and unceremoniously tossed him, but I'm going to assume Admiral Buzzington decided he felt better and flew off into the sunset to have adventure.

Fourth of July was fun. Lake Union here in Seattle was totally full of little boats, mostly full of drunk people. Epic firework show fired off from the middle, and we got to man the yards (ie stand up on the yardarms) during the fireworks!
There was a Wooden Boat Festival here over the weekend and three schooners (The Zodiac, Adventuress and Merrie Ellen) joined us. The schooners are all either bigger or of a similar size of us, and the Adventuress and Zodiac have crews of young people similar to ours, but the one night we all partied together, by 10:20pm only our crews were left, and the other nights the other crews never showed up at all! Weak!