Got today off sos I could do my Peace Corps interview this morning. Now it's 18:22 and I still haven't finished reading through the nine pages of emails in my inbox -- I really shouldn't have tracked comments to that one post I guess.


So I wake up with a start this morning in my rack, look at my clock/cellphone in a panic. 0850. I should have set an alarm. It takes me a moment to remember the previous night of drinking on the schooner Mallory Todd (hey I had to go over there to use their internet to find out where I'm going!). Why isn't anyone else up yet? Guess they all have a 0900 wakeup. My interview isn't till 1000, I'd have liked more time but it's still enough.

Fortunately the location of the Peace Corps' Seattle offices was a straight up down the South Lake Union Transit (the actual name!!), so I rode the ...tram... there in ten minutes.

At first I was worried she was annoyed and thought I was just telling her what I thought were the best answers, since my answer to things like "what do you do when you're really stressed and frustrated" were pretty much "I don't really get stressed and frustrated" and "how do you anticipate dealing with being away from your friends and family for 27 months?" "just fine? that's what I did htree months ago when I came here." "You might get lonely separated from all your friends, how do you think you'll manage with that?" "I'd imagine I'll make friends there?" "You'll be living with a host family for the first three months, what do you think of having no privacy?</i>" "Let me tell you about no privacy! I have 18 inches of personal space right now!" And so on and so on.

And then there were those pesky "tell me about a time you used leadership abilities" questions. I hate those. On the spot trying to think of some incident that would particularly illustrate my leadership abilities? Or "tell me about a time when you educated someone" ! Fortunately just the day before, a former crewmember from two years ago happened upon the boat and we promptly signed her aboard for our sail, and I had gone around the pinrail with her helping her remember the lines. For the recruiter I highlighted how I had let the girl figure things out for herself, and when she needed hints rather than just spelling out C L E W or something for her I'd point out where it connected to the sail and what it did until she figured it out herself.

In the end the recruiter made an unnecessary comment about how she thought I'd be a great candidate or something along those lines, leaving me feeling pretty optimistic. And apparently I'll know in about a week if she's forwarding my application on with recommendation for placement!

Then I went to lunch with the pinrail girl. 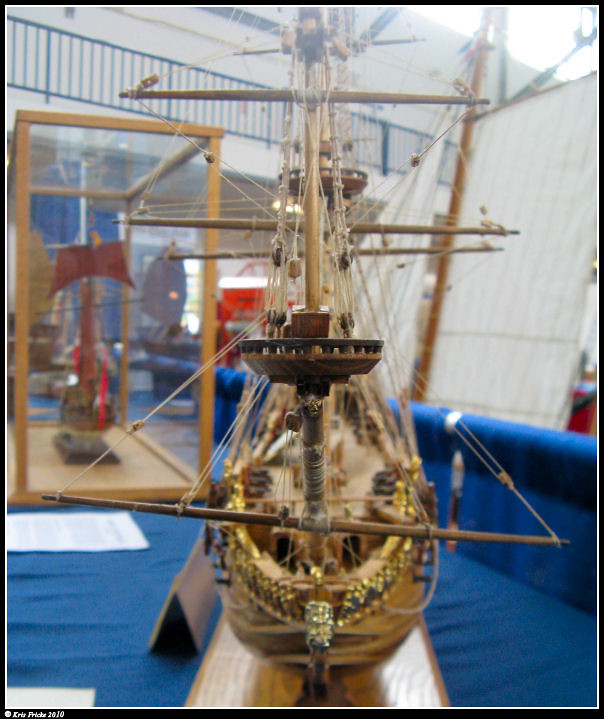 Model of the Swedish man-of-war Vasa. I saw the original once in Stockholm.


Tomorrow morning we're off to Blaine, up by the Canadian border! Transit should take more than a day.