The Grounding of the Odyssey 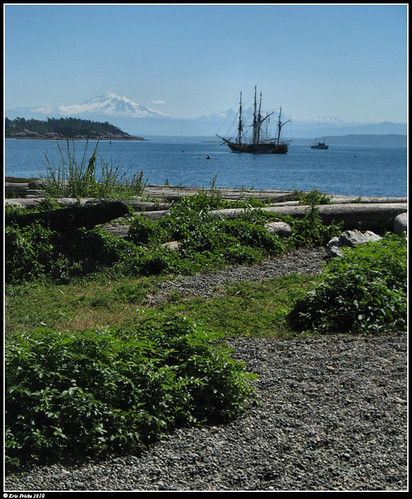 So once upon a time we were anchored off Sucia Island. By once upon a time I mean the week before last. We had left Lake Union, Seattle, through the locks early that morning and arrived at the island around 1700 that afternoon. Coming in we passed the sea scout tallship Odyssey, -a pretty yawl almost as big as our own vessel- moored up to a mooring buoy in the little bay.
We dropped our anchor, and after dinner we were allowed two hours or so of shore leave, being ferried to shore in groups of three by the small boat. Random fact about the small boat: the HC's smallboat is named "Pele," which amuses me because it's the name of my parents' cat -- what's more, both the cat and the boat are named after the same Pele, the Hawaiian god of volcanoes and mischief.

Around 2000 or 2100 the Lady Washington finally caught up to us, having taken a different route that took them through Deception Pass, and having had to anchor for a bit down there to wait for the currents to be right to get through the pass. They rafted up to us (ie moored up to us as if we were a dock) and that night both boats stood an anchor watch. For anchor watch one person was on duty at all times (mine was 0400 to 0500). In addition to being on deck, everyone during their hour was to heave the lead line (6 and a half fathoms), note it in the log, take down the bearings of the same three points and note them in the log, note some other things in the log (est wind speed, direction, etc), check the bilges, etc. I got the hour before sunrise, so I didn't get the sunrise itself but I got the gathering pre-dawn light. 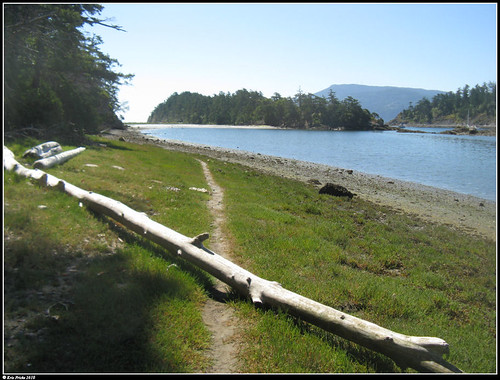 Again that morning we had two hours or so on shore. The entire island is a state park and it's beautiful with really nice hiking trails. I was very excited by the thought that we'd be anchored off the island or one like it for a week for the then-upcoming youth camp. 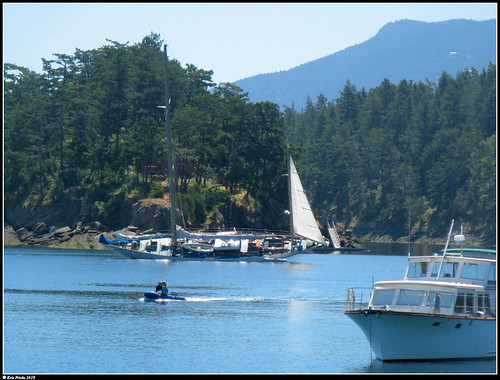 Returning to the rendezvous point around 1100 we see the Odyssey at the far end of the bay leaning over to a very alarming angle, and are informed our pick up is going to be delayed because the small boats are all busy pulling people off the Odyssey.
It seems the vessel struck a rock as it was attempting to leave the bay. Attempts to motor it off only resulted in frying their transmission or some such. As the tide continued to go out the boat tilted at an ever greater angle until it looked almost on its side.
Meanwhile our two vessels were full of boyscouts, hanging around nervously discussing how they'd miss their ipods and/or other prized possessions left on the boat, should it sink. For our part, while cheery music blasted from the ship's sound system some of our crewmembers took turns climbing to the lowest yardarm on the Lady and diving in from there, or swinging out into the water from "splashlines" coming down from the forecourse yard. It was basically like a pool party for us all afternoon. 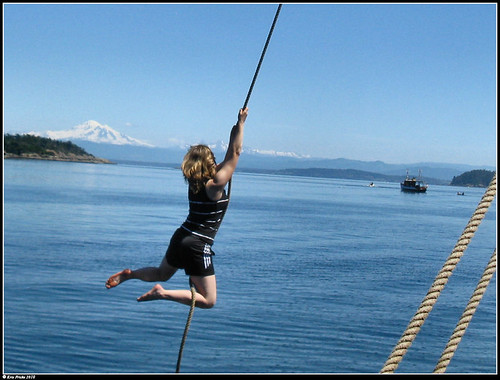 Meanwhile our engineers and command staff spent most of the afternoon working on mitigating the Odyssey situation. Park rangers had come out in a boat with an oil boom to put around the Odyssey but didn't know how to deploy it so our guys ended up doing that, something for which they'll apparently be paid by the state (much to their surprise)
Low tide was at 1400, the Odyssey was pretty well sideways at that point. But water didn't come in the hatches at that point and from then on things would get better as the tide came in.
Around 1700, once it was clear the Odyssey would be okay the Lady Washington departed for Blaine. That evening the Odyssey was able to float free from the rocks and we got her tied securely to the side of our boat (towed "on the hip" as they say), and we weighed anchor and proceeded south to Friday Harbour with the Odyssey in tow.
Arriving there around 2200 we recognized the schooner Zodiac (picture is of it leaving the area the next morning) anchored in a little bay across from Friday Harbour and radioed them for the assistance of their smallboat. They readily sent it over (a zodiac from zodiac?) and we used our two smallboats to maneuver Odyssey on to the dock.
For our efforts the Odyssey captain signed a salvage contract with us, awarding us "two cases of ginger beer, a bottle of rum, and merit badges" -- the latter in the form of the unofficial "superhero" merit badge apparently.
Then we all went to the bar and drank copious amounts (but it wasn't as wild as last time we were there). 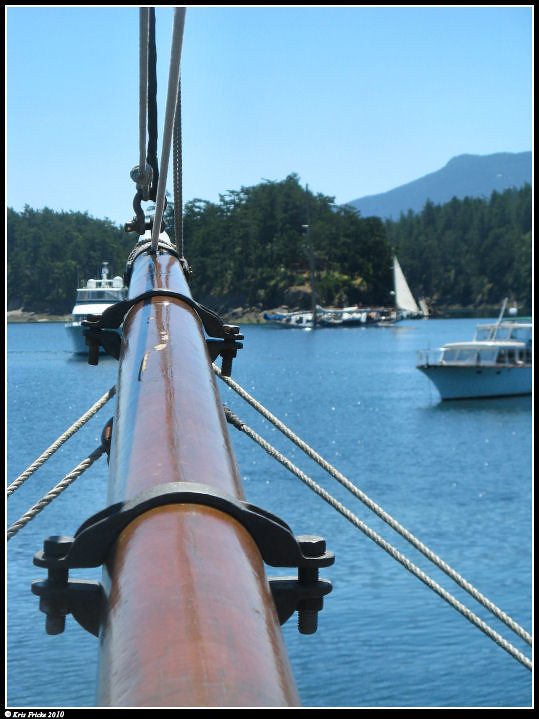 ( More Pictures From These Adventures )