Live from Day Off!

Guy on a harley, shouting over the enormous roar of his engine to another guy on a harley, "that place is an environmental disaster, imagine what they're putting out into the environment!," while pointing at a long decommissioned factory. At the end of this statement the light turns green and they both roar off leaving a cloud of exhaust.

I'm on my day off today. Back in Bellingham this week and next. I love this place. We were going to spend this next week camping and hiking and things in islands like Sucia but apparently there weren't enough sign ups to warrant sending both boats out so only the Lady is going out. I'm rather bummed because I was really looking forward to said camping and hiking, but at least we're in Bellingham instead, which is definitely my favourite place we've visited. I love this town.
There's a lot of former crew that live here, in particular one house where just about everyone that lives there is former crew. They had a party last night for the crews and then since I have today off I crashed on the couch here. In the morning went for breakfast with some of them at this place called Bayou on the Bay which was DELICIOUS!! (I had a "benedict arnold," which is apparently an egg benedict crossed with biscuits and gravy -- and a "cajun coffee" - coffee with bourbon in it. (: ) The house here is really close to downtown and they've been letting me use it as a base of operations to pop in and out of so its great. Another crewmember who lives here and just got off the Chieftain just called me to ask me if I wanted to borrow a bike...
...In conclusion, Bellingham is fantastic and it is full of fantastic people.

In unrelated news I'm sitting in the aft cabin doing paperwork the other day and turn around to see our captain eating an In-N-Out burger. "HOLY CRAP WHERE'D YOU GET THAT?!?" I exclaim, about falling out of my chair. He grins ear to ear and leaves me in suspense for a moment or two, and then informs me that the captain of the Lady, returning from vacation that day, had brought it back from California for him!!!!
For those of you not from places colonized by In-N-Out, these are the lengths we'll go to to get some. :D 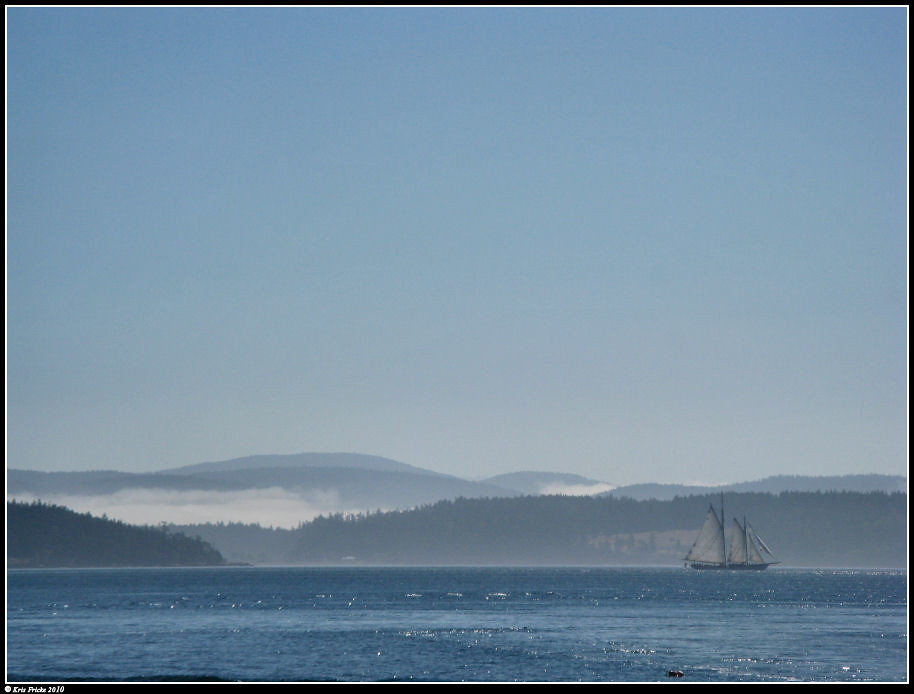 Schooner Zodiac leaves the area the morning after the Odyssey rescue.