Just a week or so ago we hit an all time low in numbers of crew, Pony as acting captain, myself acting first mate, with Will and Maple Syrup rounding out our crew of 4. As we didn't have a sail that day the captain and his girlfriend the cook had taken the day off (so really there was a crew of six). That night Will was off with his ladyfriend so it was only Pony and I sleeping in the main hold and Maple Syrup in the first mate's bunk in the forecastle (because she's been dating involved with the first mate, who himself had been gone for most of the two weeks around the time).
In the morning the Captain and cook came back, two crewmembers from the schooner Zodiac joined us (underage kids who couldn't go on the wine tour that boat was about to embark upon) and the awesome miss Josie.

The other night for the first time the 9 of the 10 usable bunks in the main hold were occupied for the first time I can remember, and we're now burgeoning with 13 or 14 crewmembers. We finally even have an engineer! And there's not one member of our crew that annoys me AND most of them are downright awesome! (:

I feel like here's actually been a little bit of animosity between the boats lately. Normally there's none at all because nearly all the crew who have been around very long have served on both and consider thme fully two parts of the same thing. However the last battle sail or two I noticed instead of the usual purely witty "jeers" being slung back and forth between the boats many of the jeers emanating from our boat were verging on a bit genuine. I think it's because of my counterpart on the other boat, Brennan. From the start he's been genuinely competitive about saying their boat is better and putting down our boat. As I've said, this is totally not the usual attitude of anyone around here, but he's persisted with it for the month or two since he's been around. Always in his shrill screechy voice in a manner that sounds just a little too serious to pass off as joking he's making comments putting us down in front of us, and it's generating some real resentment.

We're presently in Roche Harbor, San Juan Island. We've decided it is "Disneyland for Yachters." The only thing here is a big marina full of giant yachts, two restaurants, a hotel, and an airstrip. The marina employees seem to be entirely either attractive blonde girls or douchey looking guys with spiked hair, all between 20-22 years old. When we first arrived we tossed our first mooring line to two such guys on the dock, they let it fall limply to the dock between them and looked at it like it like someone had just dropped a wet towel on their floor and one asked "uh, want me to put that on the pin for you?"

Sun is still setting around 9pm. Yesterday after dinner several of us went off into the forest in search of a flooded quarry we'd heard about and went swimming. The water was very clear and quite pleasant. As we were walking back through the forest we came upon a free outdoor performance of Shakespeare's "Henry V" at a little wooden stage. ...I like other Shakespeare plays but Henry V apparently is kind of dull and we all snuck off presently and returned to the boat.

Today I have the day off. Spent an hour this morning fighting unsuccessfully with the internet and then struck off into the forest in search of adventure. Found a big mausoleum and the sculpture park, and just beyond the sculpture park was a nice nature trail. I'm not into crap hippie shit but I found a beautiful little glen with a rustic little bench and the light drabbling down between the leaves of the trees and I daresay it felt so peaceful there I couldn't but sit down and space out until the shrill cacophonous noises of hideous little children coming down the trail rudely brought me back to my senses and caused me to flee the scene. 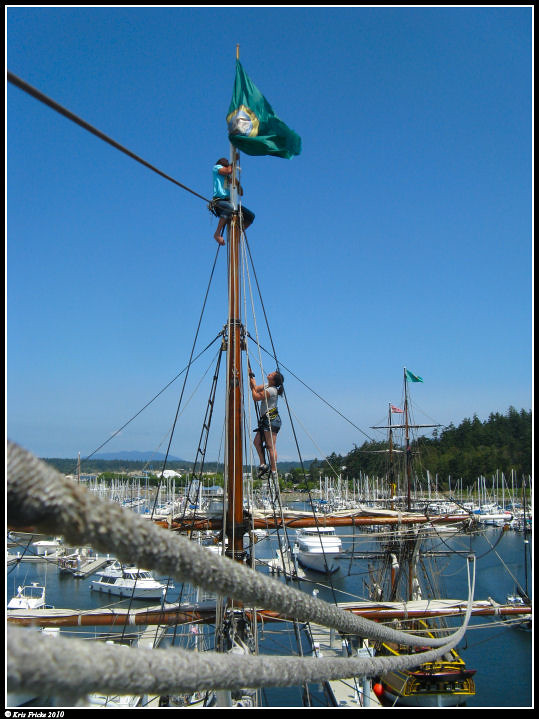 Will on his way up to truck the mast to unfoul "George" (the Washington State flag), with Maple Syrup a little way below him.
As seen from the mizzen truck.


My parents (yes the illustrious

furzicle!) are coming up to visit in about a week. The end of my contract is now in sight, ending just after a five day hop that will bring us down to San Francisco on around Oct 11th. I really wouldn't mind staying on longer but I need to get things squared away for the Peace Corps and earn some real money before I disappear.

In the meantime I'm going to take the opportunity to do some more hiking in the forest.