So I learned the most awesome game last night: Telephone Pictionary. It's a combination of the games of pictionary and telephone.

The more players the merrier but for example we had five last night. Every player should start with as many sheets of paper as there are players, they need not be a whole 8.5 x 11 sheet and we were using quarters of full sheets. You write something on the first sheet such as "dragon making microwave popcorn," "proper use of a marine head" or "bear-shark-topus roasting marshmellows," and when everyone is ready everyone passes their entire stack to the right. You will be receiving a stack from your left with something written on the top sheet. Look at that and put it to the back of the stack, and now attempt to draw something that will convey what was written on the other sheet. Once everyone is done with this stage the stacks all get passed to the right again.
Now you're receiving a drawing, and you basically do the inverse of what you just did, put it at the back of the pile and write what you think the words that inspired it might have been. And then next time someone draws what you wrote, and this continues until you get the stack back that started with the phrase you wrote. Everyone goes around sharing the iterations of their stack and mass hilarity ensues!!
My dragon making making microwave popcorn turned into "godzilla being fed through a funnel," "bear-shark-topus roasting marshmellows" turned into "monster roasting hotdogs" and when I got "proper use of a marine head" back all that was written was "something disgusting!!" ... it seems somewhere in the process it had become a picture that looked strikingly like someone "manually stimulating" a sea otter, and the last person to get it decided to simply sum it up as "something disgusting."
Your results will presumably vary based on whether you play with nice decent normal people or salty sailors who've been out to sea too long. (: 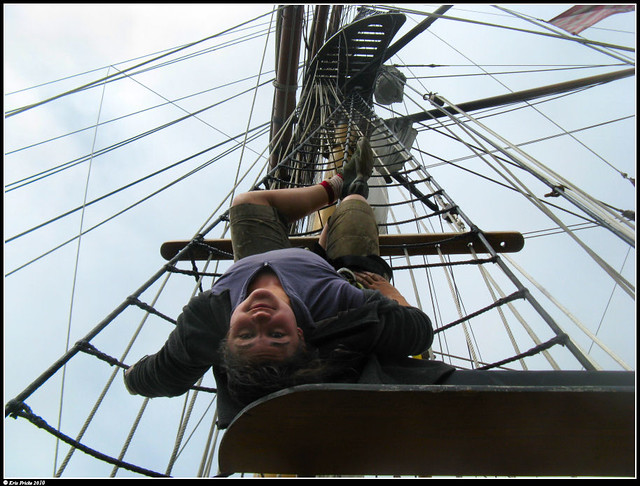 Sabrina hanging around on the shrouds.