In theory I'd catch up on the internets and the world when I have days off, but my last day off I spent in the car with my parents, and the one before that I was in Roche Harbour where the internet wasn't working, so we're looking at at least six weeks between having a solid day to catch up on things.

And there's so much I COULD write about, practically every day is an adventure worth writing an lj entry about, but I rarely have access to the internet and also rarely have free time. Well I have "free time" as in time I'm not working usually at least four days a week from 6pm or so until as late as I feel like staying up but there's always something going on (the other three days we're working from 8am to 10pm or so usually).


When last I reported in we were in Roche Harbour, this little marina full of giant yachts and not much else. Lots of people came by when we were open for tours but the scrooges didn't leave much in the way of donations and ticket sales to go on our sails were absolutely dismal (I think most of them had about six people on them).
From there we went to a small town named Coupeville where everything was sold out (all 88 tickets sold to fill both boats). Donations, which had been about 12 cents per person who came on tours in Roche Harbour were sometimes as high as $1.09 / per person in Coupeville and never less than 66 cents per person at the end of the day.
But moreover the people in Coupeville were just awesome. The dockhands consisted of this awesome young fellow named Max (17), his 15 year old sister Emilia, and 11 year old brother Gus (as seen here, Gus and Max being the two lads acting like brothers and Emilia the one giving the peace sign), and they were the nicest most awesome group of siblings I've ever met. Another family that happened to come on a sail with us later invited the crews of both boats over for home made pizza, and then apparently didn't learn any better and invited us over again the next day for icecream! (Of this family, AJ is the one with purple hair in the above picture and her mom is in the background behind her.) In fact, as I had galley duty, AJ and her sister Claire helped me do all the dishes from dinner so I could come over for icecream and telephone-pictionary.
And in a THIRD example of Coupeville friendliness: my parents were visiting (expect a report from

furzicle soon) and all lodging was booked up due to a arts and craft fair so they were stuck in the apparently infamously bad local inn. When they mentioned where they were staying to a couple who were on one of the sails the couple immediately offered that they should stay at their house .. which I gather was a very nice fancy log cabin affair or such.
Also Will got facebook stalked by no less than two girls in this town. Friendly indeed!

On our last sail in Coupeville we had the whole dockhand family, and the whole family that had had us over for pizza, as well as some other noteables (such as my parents, and the harbourmaster (whose daughter Maryam would go on to find Will on facebag despite having never gotten his last name from us)). Max, Emilia, Gus, AJ, Claire and Maryam all got very involved in helping us haul lines and it was piles of fun. 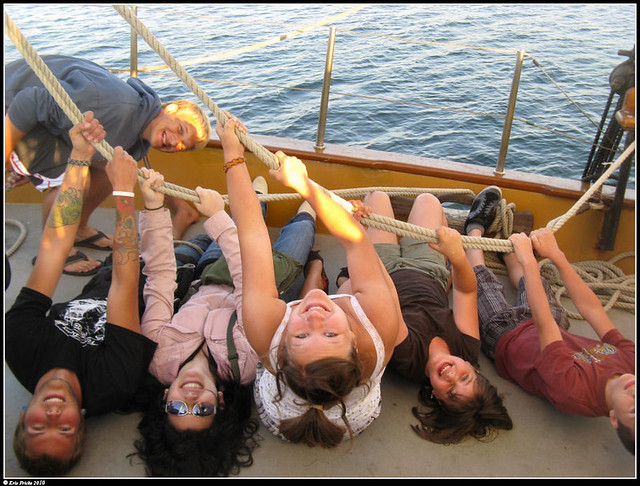 Max, Will, Maryam, Emilia, Claire, & Gus
"Board sheeting" the headsails, for which one really does lie down on deck like that in an attempt to pull the headsails as flat as possible.


The next day the boat transited to Brownsville (a place most people who even live only half an hour away have never heard of). I was given the day off to go with my parents to take the cook's car by land to Brownsville.
There is nothing here in Brownsville. Nothing. A small marina, a deli, a "yacht club" which is really just a big lounge which allows riffraff like us to hang out there (: But it also seems super friendly. Sales for the sail we had that night were pretty good (circa 65 ppl), and the local (some kind of official position attached to the marina, or something?) has scheduled various things such as a bonfire for us, and tonight they served us piles of pizza in the yacht club, and have opened up the aforementioned yacht club for our use, and have said we can get snacks and sodas from the deli on their tab... !
And yesterday we picked two buckets of blackberries and made fresh blackberry cobbler. :d

So that's just the happenings of the last few days. Keep in mind that pretty much EVERY day for the past four and a half months have been filled with as much activity (though not necessarily as many awesome shoreside people as Brownsville and Coupeville). 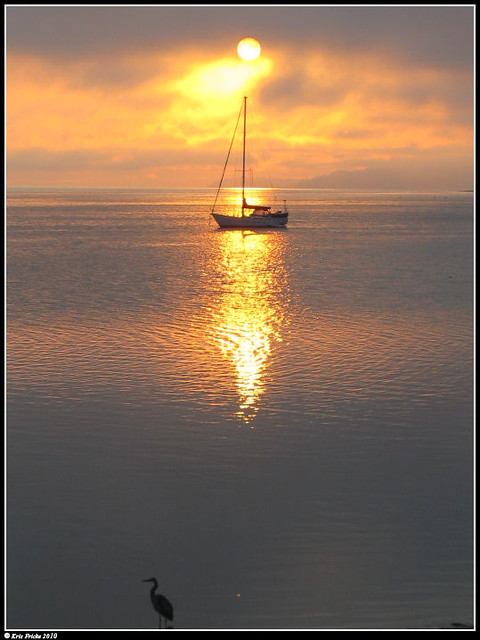