The Week Everything Went Wrong

One week ago, Tacoma, WA, circa 9:00pm -- It began with a lot of muffled hollering in the hold. Muffled because everyone down there was wearing respirators. Moments later someone popped up, wide eyed, pulled off the respirator long enough to yell "WE'RE LEAKING!!!" and disappeared back below.
Those of us on deck instinctively lunged towards the hatch before realizing that the main hold was full of toxic chemicals and no more people could be of any use in the tight corner they were working in. Nevertheless the engineer and bosun came rocketing out of the engine room down into the hold, respirators-be-damned.
The toxic fumes btw were from Ameron, the marine grade paint we use, which apparently utterly destroys your liver. They'd dried out and rust chipped the bilge in the main hold and were setting about painting it when someone bumped something in there that caused the coolant tank under it to start leaking into the bilge. So the good news we soon found out was that we weren't taking on sea water, the bad news is that we were leaking coolant, and therefore couldn't run our port engine.
And as it happened the next morning we had a five day transit! We worked on attempting to find and seal the leak until around 11:30pm that night and the next morning made the transit up to Port Ludlow, a several hours journey, with the wind dead in our face so we coulnd't sail. Because the prop shaft runs through the bilge we coulnd't work on it during the journey either (despite the engine being off, the shaft still turns as water passes the prop).
That evening we pumped out more leaked coolant and tried unsuccessfully to find the leak some more.
Day 2, Tuesday, we left Port Ludlow and headed down the Hood Canal (which is not a man made canal but a long narrow passage), the wind right in our faces again, some 30mph, and the seas a heavy chop. Interesting note, there is a bridge across the mouth of the Hood Canal that opens not upwards like normal bridges but slides slowly open "like the gates of Mordor." We've taken to referring to it as the Gates of Mordor. And that night anchored off this tiny little village called Aoch. That evening we were invited ashore for burgers so we went too and fro via the smallboat.
Day 3, engine still out, coolant still leaking, and the wind now going the OTHER direction, we motored out of the Hood Canal upwind AGAIN. Seas were once again very rough, there being a "small craft advisory" in effect, which is modern nautical speak for its getting kinda wild out there and you probably shouldn't be out if you're in a small craft or don't totally know what you're doing. So although the original plan had been to anchor just inside the gates of mordor, we instead made an unscheduled stop at Port Ludlow again, since its a particularly well sheltered inlet and about halfway to our next destination (Friday Harbour, San Juan Island). That night I had the 01:00 to 02:00 anchor watch, the water in the inlet was flat as a mirror, the moon was rising big and yellow over the water, and the sky was full of stars.
Day 4, Thursday, we proceeded up to Friday Harbour. As I recall the weather was quite nice this day, but the wind was still dead in our face. Port engine still offline. In Friday Harbour we were able to moor up and get a taste of civilization, return to everyone's favourite bar (Harry's). Whereas a bookstore was hard to find in Tacoma, on foot in Friday Harbour I was able to visit three in twenty minutes (as I now needed books 12 and 13 of the Patrick O'Brian series). The first place only had books 1 & 11, the second place had several of the earlier books and number 12, and the third place had all of them EXCEPT 13-16. d:
Day 5, Friday, we left Friday Harbour and headed across the straights of Juan de Fuca to Port Angeles. Once again the wind was too much in front of us for use. Port engine in use now. Shortly after we departed it was reported from below that the port bilge was smoking and the starboard bilge was almost full of water, so we had to stop for a short bit and pump out the bilges and investigate the smoking. At some point during the repairs and tinkering the packing on the port shaft had become too tight, leading to the smooking, this was easily fixed however, and I think we were able to continue with both engines. Weather started out nice but by the end it was wet and wild, with 45mph winds in our faces, pretty rought seas, and thick fog.

Its three days later and we've cancelled the two sails we had scheduled for today and are making a major effort to get this whole thing fixed. Among other potential problems there was a suspicion that coolant might corrode the sealant being used, so captain was researching that, meanwhile they're trying to empty the coolant tank and fill it with dyed water to find out where it's leaking from. Engineer is out looking for ten 5 gallon buckets to handle the liquids involved, and we're all supposed to put the word out that we need a welder that is either a midget or a contortionist.

So if you know a midget or contortionist welder, please send them our way.

Or well, everyone else is doing these repairs today. I have the day off. I feel a bit bad about missing it but I haven't had a real day off since... I think July 25th, and I rather feel I need it.

So yeah, I'm in Port Angeles. So how's everyone been? Also I'd like to apologize for all the comments and lj messages I haven't responded to. I really really don't have time for these things most of the time. 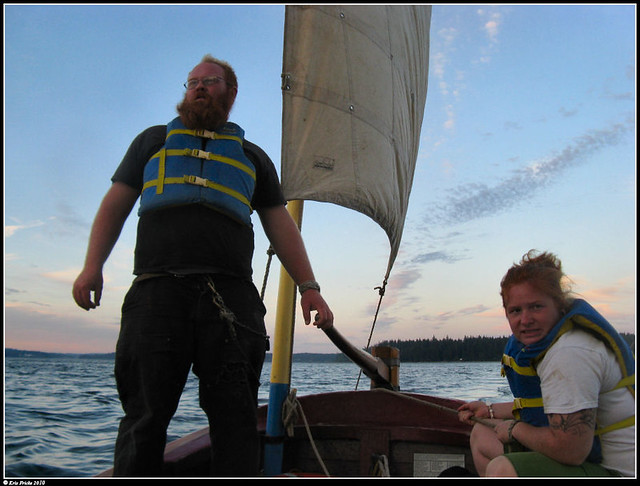 Capt Jimmy valiantly commands the longboat.
Jimmy is no longer the captain, he has been succeeded by JB. I've had three captains and 8 cooks in my five months here.

In camera related news the flash on my camera doesn't work at all. And what's worse is it still tries to use it, making it bungle any picture taken in dim light unless I manually tell it the variables. d:


And I only have a month and a half left here! O: