Hello from San Francisco! We sailed in under the Golden Gate Bridge around 2am the morning of last Friday, having been at sea since the prior Monday (up at Ilwaco in the mouth of the Columbia).

I stood the 4-8 watch (which is of course both 4-8 AM and PM). It's a pretty decent watch since you get every sunset and sunrise and dinner at 6pm doesn't interrupt your off time. You just gotta go to bed right at 8pm if you want to get eight hours of sleep before your next watch (which of course ends at 8am, by which time it's daytime again!). The 8-12 watch has a better deal in terms of they get to sleep during normal sleeping time, and then the other watch, 12-4, doesn't have any redeeming qualities that I can think of.
I didn't get to be a watch leader this time since we had a third person with a master's license so they made him the third watch leader. But instead I got to man the wheel for hte majority of my watches. In the watch before mine apparently three of the four people were avid singers and they passed the time by singing all through their night watches. Ours we barely talked at all, preferring to all sullenly gaze off at the horizon as the hours passed by, with an occasional comment on the weather to be answered with an agreement followed by more silence. Not that I'm complaining, it was altogether a very decent transit. Quiet watchmates are better than annoying ones, the weather was nice, and we made excellent time. I've got pictures of most of the sunrises and sunsets, most of them being picturesque. Later maybe I'll put them all up.

Arriving down here we moored up at Jack London Square in Oakland for the weekend. The highlight of this location was THE bar that I've heard experienced old hands talk about up and down the coast -- Heinhold's First and Last Chance. The bar opened and has been in continuous operation since 1883, and many objects inside are original. It was built from the timbers of an old whaler, and was frequented by sailors from the beginning (it was their "first and last chance" to get a drink before shipping out or upon arriving). In the great 1906 earthquake the entire building shifted and settled at a steep slant, and they've kept it that way so it has an extremely unique slant to the entire place. The clock on the wall is stopped where the quake stopped it.

It's Fleet Week in San Fran which means there's been a lot of boats about and on Saturday and Sunday the Blue Angels put on an airshow over the bay and we had "front row" seats as it were right in the middle. I got to skylark aloft for some of it, putting me right at eye level of some of the tricks! It was pretty awesome.

Today we moved over to Pier 40 on the San Fran side of the bay. If anyone is around and wants to visit, just remember that Pier 40 is NOT anywhere near Pier 39.


We got a new captain right before the transit, this fellow Jake, who is pretty laid back. Now that JB is transferred to the other boat to take over as captain over there I have room to reflect that his sullen moody demeaner was rather unsettling and I'm pretty sure he despised me.
In addition to this the crew is nearly 100% different from what it was a month or so ago (as tends to happen), and while I've always liked the crew here, for awhile I think too many members of the crew were just a bit TOO charismatic, particularly Tyson and Will, and I had been really starting to develop a complex about being the most boring personality-less person on the crew. Not that the current people aren't interesting and full of personality, but one way or another I haven't been feeling quite so out of it lately.


I'll only be on the boat for about another week -- getting off sometime after we arrive in Sacramento. From there I'm not exactly sure where I'll go. I really want to visit

gratefuladdict in Modesto, I also need to get my car from Monterey, where my cousin has apparently run off with it after naming it Grendel or something, and then of course I need to get back down to southern California.
On October 30th the schooner Spirit of Dana Point will be transitting from Santa Barbara down to Dana Point and I think I should be able to get myself on it for that. (: 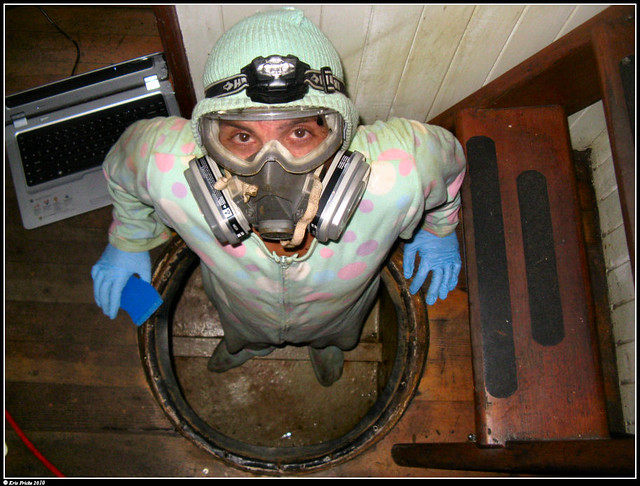 Joel cleaning the fresh water tank. To keep it as clean as possible the cleanest article of clothing on the boat was requisitioned for the purpose -- Will's spotted onesy pajamas.


I just uploaded the pictures from two weeks ago that I never got around to putting on flickr due to computer troubles.