Sailors, modern sailors of square rigged ships (or ketches, schooners, brigs, and all things that are pointedly not "ships") tend to look a bit scruffy. When you're living out of a seabag and if you really want to shave you have to do it in a tiny dim closet sized room that's pitching about, and there's no one around to impress, so you don't get around to it as often as you might otherwise.
They also wear a lot of things lanyarded to their belt or beltloops. They have a phrase -- "if you like something, put a lanyard on it. ...if you love something, ... leave it home." These lanyards are usually made out of seine twine (sailor duct tape!), and in fact, almost anything can be fixed with seine twine.
And they do tend to use "avast" and "belay" in every day conversation. They may give you driving directions involving turning to "port" or "starboard" without thinking about it. Or ask you to tack the salt across the table. When a task is complete they'll tell you "that's well." They might even say "arr," ... but probably if -and ONLY if- they happen to have a toothache.


Beekeepers also tend to be scruffy. Some good scruff protects your face from bee-stings. You'll also often see them walking around with either duct tape connecting their pants to their boots or their pants tucked in to their boots, which means they just came from tending the bees and didn't fancy getting them in their boots or up their pant leg.
They tend to talk in analogies to bee behaviour -- swarming, obsconding, buzzing about.


One might have seen me yesterday walking about with my pants tucked into my boots and a very long lanyard hanging from my ever-present camera, and one of my shoes is laced with seine twine. Admittedly I don't think I've shaved in a week (and it didn't stop a bee from stinging me in the eyelid the other day, RUDE!), and if you'd talked to me I might have casually referenced belaying my work for a bit to go pollinate subway for lunch; or avasting early to abscond before my way home was shoaled up by the swarms of students getting out of the school I must pass by to get home.
This past weekend I was up in the rigging of the brig Pilgrim helping unbend (ie downrig, ie take off) the sails for the winter; this upcoming weekend I'll be crewing on the schooner Spirit of Dana Point for the transit down from Santa Barbara to Dana Point; and the week in between I've been looking after bees in boxes.
For most of the last six months I was a crewmember on the topsail ketch Hawaiian Chieftain, and for most of the next two years I will be doing beekeeping in Africa through the Peace Corps. 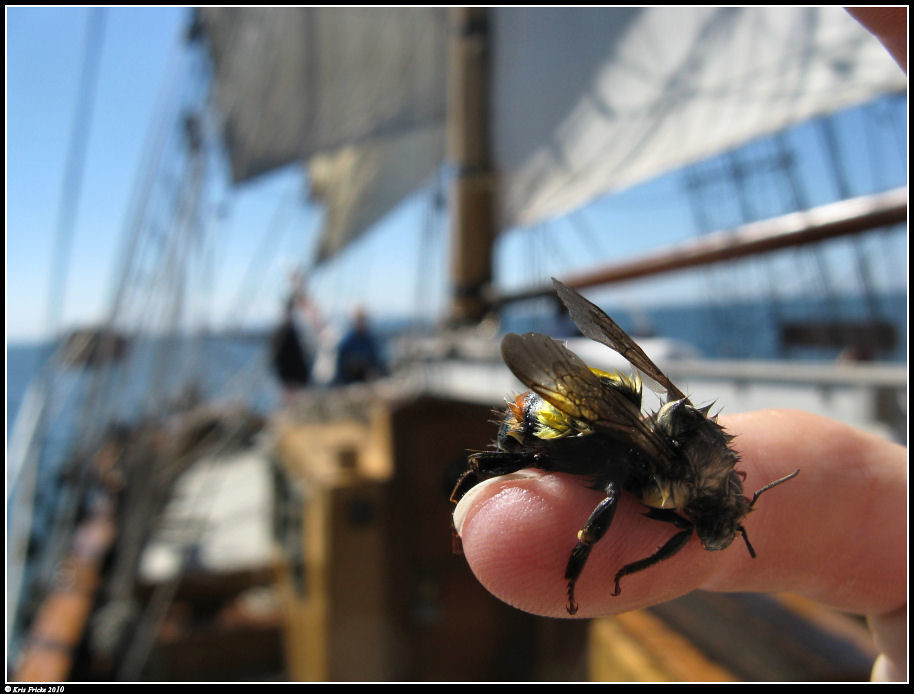 This LJ will often include pictures, often unrelated to anything. This, however, is a (bumble)bee on a tallship.


As far as LJ Idol is concerned, I try to avoid the usual "here's some random anecdote I pulled out of my past that fits the prompt" entries. If it's particularly apt I might pull out some story from my life but more often I prefer to write some kind of story that has some kind of point, and I try to make each one as different from every other one as I can. Anyway, you'll see what I do.
In the mean time I made an index of my entries from the first season I participated in LJ Idol and have been working on an index of last season.

It was technically impossible for me to remain in LJI until the very end last year, and this year I'll be cut short even sooner -- I'm scheduled to leave for Africa in February. Unlike last year though, this year I shouldn't have to post half my entries from internet cafes in obscure places.