There's a dragon in my office. Its body is a shiny metallic green and its wings are a translucent orange, it's very beautiful, but by the time it is sighted by its prey it is usually too late for them. I'll tell you what its like to be agonizingly devoured by one in a bit, but first some background.

When I first came out here to establish a colony deep the uncivilized forest, we had the typical colonialist ignorance of what strange things might lurk out here. We built our little city of square white houses in neat little rows, and all seemed lovely at first.
A neighbouring tribe, the vespula germanica, soon made their presence known and is constantly testing our defenses in hopes of overrunning us, but our brave cadre of guards is able to keep them back.
Then there's Dnys the giant frog, who demands a daily virgin sacrifice, which is fine, really. Our population could easily support that, and it is a small price to pay for access to the water the frog guards.
What's more disturbing, however, is the giant arachnids that eat my citizens while they are out foraging in the forest. With bulbous bodies like enormous black widows, and glossy carapaces as black as their souls, they brazenly snatch up the unwary in the middle of the day if they get half a chance, lying in wait behind any nook, outcropping or crevice they can find.
And then of course, there's also serpents...

Now those of you who've been around awhile and know my wily ways will not be surprised to learn this is all about the settlement described and photographed here.
A neat thing about working with the bees is that you're out in the forest and other than the creatures you naturally find in the forest, entire food chains spring up around the bee yard.

During dry periods we need to put water out in little plastic pools for the bees. This would soon start growing mosquito larvae if we didn't put mosquito fish in the water. We put water hyacinths in the tubs to slow evaporation and give the bees something to land on when they're gathering water. In among the water hyacinths we soon found a few big frogs who were no doubt feeding upon bees and other small insects that came to the water.

Footprints evidencing visits of deer or raccoons to the water pools are sometimes found in the mud. A wide variety of smaller insects, beetles, earwigs, and hideous potatoe bugs soon move into the damp dark space under beehives and/or near the water pools. Paper wasps and the occasional interesting rarer species move in to feed on this smorgasbord of small insects.
A few weeks after a bee yard has been established a dramatic increase in the number of lizards and birds in the area will be noticed, as they also feed on the insect smorgasbord.

And of course there's the constant battle that goes on with local ants and yellow jackets (Vespula germanica). They'll make incursions in force into hives to pillage the honey if hives become week.

The serpents I refer to are rattlesnakes, not necessarily more common in a bee yard than anywhere else in the forest, but anywhere in the forest here one is liable to have an unfortunate incident if one accidentally trods upon a rattlesnake.

More concerning than the rattlesnakes, however, are the giant black widow spiders. Feeding on a constant supply of bees they get as big as large grapes, and at times can be so pervasive one will find at least one on EACH HIVE. Not only that but drop for drop their venom is more lethal than a rattlesnake's. AND they like to live in the handholds or other places one is liable to put one's fingers. As such I almost religiously won't put my fingers somewhere on a hive I can't clearly see if I'm not wearing gloves.

But most interesting of all is the dragon I mentioned. Making the occasional appearance, drifting serenely through the scene on bright orange wings, the sun glinting off its metallic green body, we have Pepsis mildei, the tarantula hawk.

The above is a tarantula hawk. As you can see, they are utterly huge. Their stinger alone is a quarter of an inch long and delivers the second most painful sting of any insect in the world. One scientist, dutifully researching the subject, described his experience thus: "the pain is like an electric wand that hits you, inducing an immediate, excruciating pain that simply shuts down one’s ability to do anything, except, perhaps, scream. Mental discipline simply does not work in these situations." But that's not the scariest thing.
The scariest thing is the downright nightmarish things they do to spiders. Tarantula hawks are nectarivores, they don't normally eat spiders.. BUT they have a penchant for something truly perverse. They hunt down tarantulas, attack and handily kick their ass (there's several videos of this on youtube if you're curious), and with one sting can paralyze the tarantula for the rest of its extremely unfortunate life. The wasp then either drags the tarantula back into its own home and seals it it in there, or digs a new hole to turn into a chamber of agony for the paralyzed tarantula. Before it seals the spider into either of these pits of despair it lays an egg on the spiders abdomen. When this egg hatches, the larval tarantula hawk sucks the juices out of the still-living tarantula until it's grown a bit, and then the larval grub burrows into the abdomen and begins ravenously devouring the tarantula from the inside out -- saving vital organs for last to keep it in unspeakable nightmarish agony fresh as long as possible.

Needless to say, the first time I saw one in the yard my natural reaction, knowing all this, was to entice it to land on my arm for a quick picture.

I was pondering what business this tarantula hawk had being in the bee yard the other day and suddenly I realized -- I've barely seen any giant black widows on our beehives lately. A giant black widow is by no means the same as a tarantula, but they ARE probably the biggest spider around other than tarantulas. Tarantulas are adorable and I find it appalling to think too hard about the fate that awaits them at the hands of a tarantula hawk ... but the thought of those evil black widows suffering the same fate really doesn't bother me. 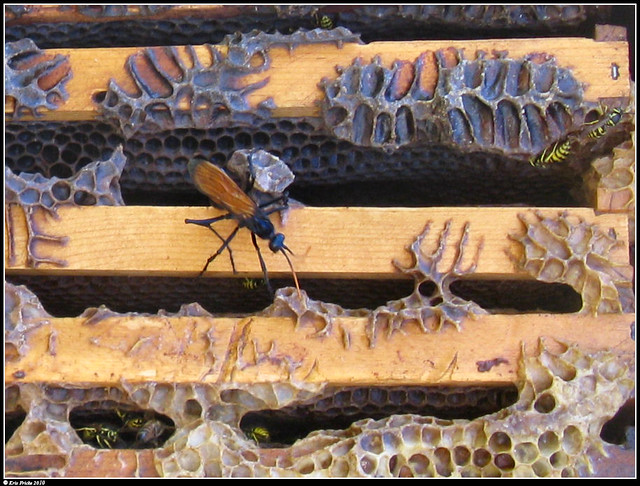