I was put on the ASUCD Supreme Court the year after President Bledsoe had decided to deconstruct it. Phase 1 had been to change its name from Supreme Court to "Student Court," the "justices" to "members," the "chief justice" to "chairman," and strip many of its powers away. Phase 2 would have been to eliminate the court entirely.
I'd been cast into the dark political hole in the ground that was the court to get rid of me, because I had been a rabble rouser. It was a powerless body that was a definite political dead end.

A case that needed to go through the Court actually came up shortly thereafter. The Court's finding was not to the liking of then-president Gallagher, and he was quoted in the student paper as saying "I'm not sure what the authority of the court is.. I think its just an advisory body anyway."
Now, according to the bylaws the Court's decisions were in fact binding, but they're only as binding as anyone believes they are. In this case the Student Government Administrative Office (SGAO), which would actually enact the government business, believed the presidency and ignored the court ruling.
I actually dissented on the Court's opinion. The Court then voted to squash my dissenting opinion from the record. I don't believe they were behaving very well really.

I recently met with a friend who is currently the chief justice at a community college, and she asked me "the rest of the government is absolutely terrible right now! how do you recommend we use the court to disassemble it?" I understand her position but it's still distressing.
In one of my political science classes the professor point blank said that judges and justices are never unbiased -- they have political agendas and they pursue them. One of the other justices sitting on the abovementioned case stated "we made our decision harsh specifically to assert our power."

Within a month the previous chief justice was impeached, and after having dissented on every opinion and been a plaintiff in cases against the court itself, feeling a bit like I was ascending over the blood of my predecessor, I found myself the Chief Justice.
And I had an agenda as well I suppose. It was to reassert the respect and authority of the court. My plan, however, was to do it by making opinions that were NOT so harsh the rest of the government would balk at them.
Nevertheless two impeachment attempts against me quickly followed.

Slowly though, over the course of a dozen cases we were able to gradually instill the belief that we were real and our opinions were binding. It came to light that the names had never been properly changed away from "Supreme Court" and "Chief Justice," etc, so I was able to restore our good name.

Three years later we faced another grave threat when the comptroller (ie chief of ASUCD's business units) decided that a judicial branch "isn't in a business model" and started a campaign to eliminate the entire judicial branch. He argued that there was no situation that the Senate couldn't resolve itself without a judicial branch.
His campaign was stopped short however, when for unrelated reasons he fell afoul of the Senate .... and found himself hanging onto political life ... through a Court case before us.

The Senate would continue to try to resolve its problems itself however, such as the time they retroactively eliminated the requirement for office that candidates oh, I don't know, not be on suspension for date rape (er not be on disciplinary probation).
This retroactive changing of the requirements for office was of course rather ridiculous, and the Elections Committee Chairman refused to certify the election. The bylaws are quite clear that the election is not valid if not certified by the elections committee chair, but going back to all that really matters is what the administrative office thinks is valid, they were treated as duly elected senators but everyone save the judicial branches.

This resulted in the third impeachment against me, as well as the elections committee chair and another justice. However, by now the court's authority was un-ignorable enough that I was able to bring the impeachment hearing to a very sudden grinding halt simply be informing them it was not legally valid, and though they'd gathered there to remove me from my position no one made any attempt at all to dispute my legal reasoning or authority.
Incidentally, this also resulted in the political obliteration of the party that had called for the impeachment.


I've always been fascinated by the authority of governments -- the manner in which it only exists because everyone believes it does. There are no, and never have been, any fairy tale kings whose authority is seen by all as ordained from on high and unquestionable. It all depends on who the bodies who actually enact activity believe should be obeyed.
The same goes for the real world, where Yeltsin was able to declare the Soviet Union dissolved and it actually happened, against the protests of other leaders of the union. Or where directly prior to Musharref losing power as the president of Pakistan he had the Chief Justice arrested because said Chief Justice seemed likely to find his power invalid in a court case.

So basically one thing I learned in student government was that authority depends on who believes the authority exists. 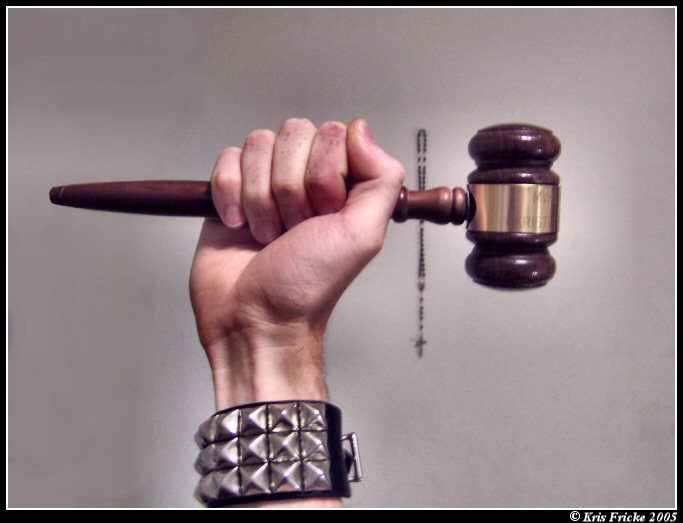 From the ancient archives: entries from the life and times of the ASUCD Supreme Court, if for some reason you're curious.
Tags: asucd, lj idol entry, lj idol season 7
Subscribe