The Last Mammoth in the Room

February, 13,000 BC, somewhere in the northwest of North America -- Wrapped in warm furs, Oxtusk surveyed the wintery landscape and leaned on his spear. In several places in the valley he could see smoke rising from villages, but what he didn't see was any large wildlife, or even tracks of such. It had been weeks since a caribou had been seen. He felt his stomach growl.
Predators such as dire wolves and saber toothed tigers had gotten particularly daring for awhile, attacking even small groups of hunters, probably out of their own desperation, but now even they seemed to have gone. But where? Oxtusk looked around at the high mountains surrounding the valley -- even in summer it would be a very tough crossing for people to make ... but he wasn't sure his people could survive another winter here. Either some people would have to make the trek, or the villages would come to war over the very limited resources, or else they would all starve together. He looked at the gaunt faces of his hunting companions and wondered if they were thinking it too.

As they returned to the village --about half a dozen huts made of furs stretched over bones or sticks, housing about 40 people altogether-- with the few rabbits they were able to come up with Oxtusk made up his mind, as soon as the passes were clear he would take as many people as were willing and could make it and attempt to cross the mountain passes.

June 13,000 BC -- Oxtusk gazed out on the green expanse before the party. It had been a long journey filled with doubt about what they'd find on the other side but at last they came through a pass and beheld this vast green valley. As they descended, hunting parties could usually find mountain goats or other decent sized game to bring back and feed the group of 15 or so pioneers.
Enormous beasts were occasionally thought to be seen afar, the size of which they'd only heard of in legends.

However, shortly after establishing a new village below the tree line, a hunting party came upon one of the giant beasts. It was massive and woolly, with giant tusks and a long tentacle-like nose. There had been legends of such things in the old country but none had been seen in generations and many believed them just to be tall tales the old folks told.
The hunting party crept up carefully with their spears at the ready, filled with excitement but also trepidation. This beast looked truly fearsome!
With a martial yell Oxtusk lept up with his spear to lead a charge at the beast. Much to their surprise, as they ran towards it, it neither made to run away nor did it charge at them angrily, but looked at them with great confusion until it was too late and a half dozen spears were inbound for its woolly hide.

The large scale extinction of megafauna following the arrival of early humans throughout the world is known as the "Quaternary Extinction Event." It had the least impact on African megafauna, where the animals had co-evolved with early man and properly knew to distrust his devilish ways, but megafauna in the Americas and Australia (giant kangaroos!?) had no warning that these silly looking bipeds without the benefit of claws or saber teeth were liable to poke them to death quite rudely with sharpened sticks.
Woolly mammoths are believed to have persisted much longer, despite changing climates, in places where humans were late to arrive, the last ones believed to be killed when humans arrived at Wrangel Island off Siberia as recently as 1700 BC, by which point the Minoans in Crete had flush toilets and the Sphinx and pyramids had already stood in the sands of Egypt for nearly a millennium. 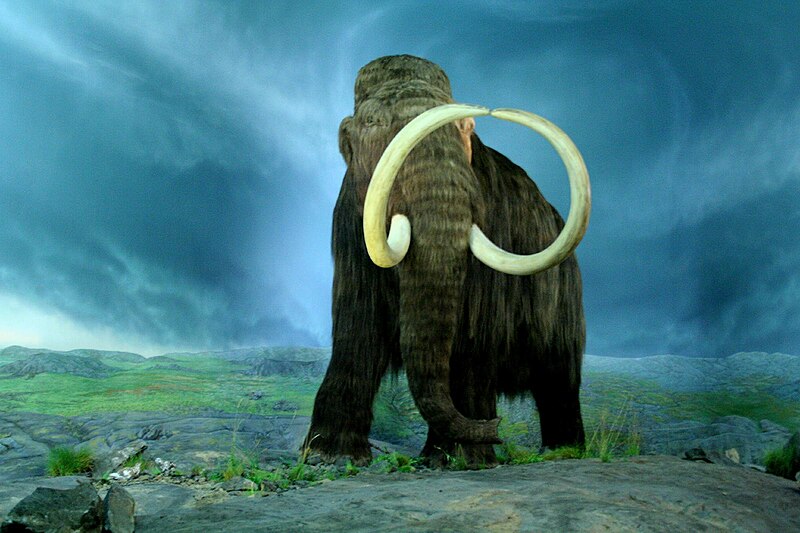