The Strange World of Shore

Once upon a time a 112 foot brig --a square rigged vessel with two masts-- emerged from the stormy December seas of the "Graveyard of the Pacific" and coasted into the shelter of Grey's Harbour, Washington. It quietly wound up up the Chehalis river to the point where the Wishkah ("stinking water") river joins the Chehalis and moored up to a decaying dock amid a light drizzle.

Once secured to the decrepid decaying dock, crewmembers bundled up in as many layers as they could fit on themselves (often six or more) hurried up the dock eager to find the "shore heads."

What they found at the top of the dock was truly shocking. After weeks of seeing only a few new people a day at little docks on obscure towns on the Colombia River, they found themselves in a walmart.
One giant room, as far as the eye could see! And warm! So warm! And filled with... SO MANY PEOPLE. ...and such ODD looking people!

Sure we sailors probably looked a bit odd to them, wearing coats more reminiscent of pirate movies than modern fashion, mostly unshaved, and probably smelling a bit musky. But I don't need to tell you what the people of walmart themselves look like. Those people that show up on daytime TV court shows or Jerry Springer? Yeah they all hang out in Walmart. Well, that and the city of Aberdeen itself. We would find that the local walmart was more or less the cultural center of the city of Aberdeen.

And after weeks of living primarily with technology that consisted of things you can do by hauling on a rope, or at best pulling a lever to flush the heads, the technology found in Walmart was baffling as well. As I entered the Walmart shorehead restroom, the faucets trumpeted a greeting of sprayed water as I walked past. Entering the bathroom stall, the toilet flushed indulgently. Then it did so again as I tried to put the wax seat cover on, rudely devouring it.
After I finished my business, I had to overcome the engrained training NOT to put TP in it (most marine heads can't handle TP), and I looked for the flush lever but of course there was none. I walked away from the toilet.. nothing. I walk back to it and wave my hand in front of the little motion sensor, nothing. I do a little jig, still nothing.
I have a strong sense of civic responsibility. This includes both the belief that one should educate oneself about and vote in local elections ... and also that one should flush toilets when one leaves. However, in frustration I'm contemplating just leaving it unflushed, when I see a little button next to the sensor.

The sink greets me with an enthusiastic spray. I put my hands under it and it obligingly sprays my hands with water ... for about five seconds. A little waving and it goes long enough for me to get the other half of my right hand wet. Mildly inconvenient but in about four spurts I'm able to get my hands entirely wet and move on to the soap dispenser, which thankfully is actually manually operated (how quaint!).
With hands now covered in soap I place them under the faucet. Nothing. I wave them in front of the faucet. Nothing. I walk away and come back. Nothing. I give it a "ARE YOU SERIOUS?!" look. More waving, more pretending to arrive and place my hands under it, nothing at all. I look for a manual override button like on the toilet but there's none to be found. I'm stuck with hands covered in soap!
Then I remember there's a drinking fountain outside the restroom. I go out there and wash my hands off, giving a passing employee a dirty look. 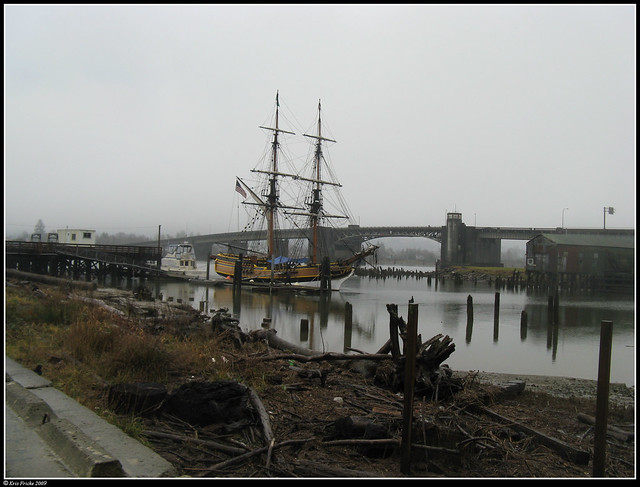 The Lady in Aberdeen, at pretty much the time the story above takes place (it may have been the next day)

83 other pictures of the Lady Washington I took during my 8 months living on the boats (: