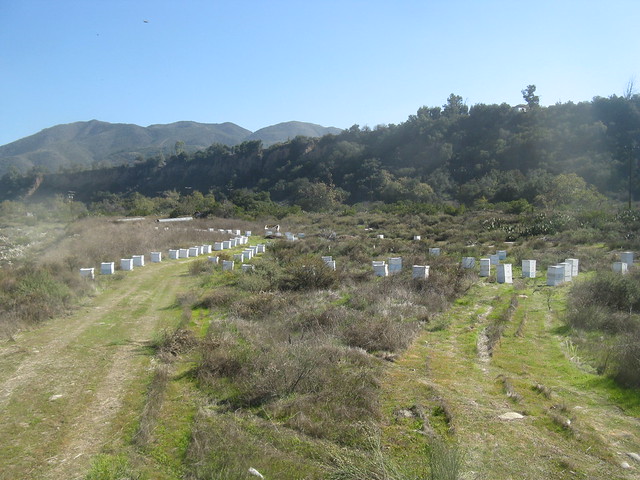 Walking down the line on a hot sunny December day I'm pleased to see very heavy bee traffic going in and out of the entrances of the boxes. We have about 100 hives at this location, almost all of them consist of three of the "langstroth" stackable hive boxes, and each box is heavy with stores of honey.
I kneel in front of a hive to watch the bees coming in. Today they're coming in loaded with white pollen. Last time it was yellow pollen and the time before that it was cheetoh-orange pollen. Normally this time in December, despite winters here in California being extremely mild, not very many flowers are flowering. I attribute the continually good forage to the very large commercial nursery nearby. I consider it both a blessing and a curse -- they are an ample source of flowering plants throughout the year, but they also no doubt use a shocking amount of pesticides which the bees bring home and wax readily absorbs.
I note some of the bees have painted their porches polka dot. This is a bit concerning from more than a fashion perspective. Bees are hygenic enough that there are bees whose task it is is to pick up any trash in the hive and throw it out, there are also "undertaker" bees whose sole job is to take out the dead and deposit them a safe distance from the hive, but there's no bees whose job is to paint the porch polka dot. Bees know to leave the hive to use the loo. If their porch is polka dot it means some aren't making it that far -- in short, some bees in the hives have bee diarrhea. This is caused by the disease Nosema apis, or possibly, worse, Nosema cerana.

Back at "the Bee Cave," our headquarters back in a suburban business park, I write a note on the whiteboard to order more "fumagillin," a medication that counteracts nosema.
Then one of the bee control technicians and I inventory our current supply of unassembled parts of hives and frames. We order them all in pieces, churned out en masse by woodshops that supply beekeepers throughout America and perhaps beyond. The other side of our business exterminates unwanted bees in people's walls, but the winter is also very slow for that so we put the technicians to work knocking hives together and wiring frames.1

Throughout the developed and developing world beekeeping is relatively similar. The stackable box langstroth hive is in use throughout the world. Woodshops in Europe, Australia and South Africa pump out the exactly measured pieces for distribution throughout Europe, Australia, South Africa, and elsewhere. A box side or frame from one manufacturer would fit just fine in one from another. They're exactly designed so when bees have built ten layers of comb, exactly straight because they're built on the ten frames in the hive, there will be exactly 3/8ths of an inch between each comb and the combs and the side, the exact amount of space a bee considers to be a hallway. This means the frames can be easily removed to be harvested or examined, but it also means the hive is considered by the bees to be the paradigm of what they're looking for in a home, so they're unlikely to abscond and move out.
You see pictures of people working langstroth hives in south America, in Egypt, Russia ... I once came across a blog of a beekeeper in Turkey and he had pictures of his rows and rows of langstroth hives, all destroyed when his beeyard was flooded. All my coworkers and I stared aghast, it looked just like our hives, and we couldn't read his turkish commentary on it but we could feel his pain.


Last week a beekeeper from Hungary who was visiting relatives in the area looked us up and asked if he could come see our beekeeping operation. He showed us pictures of his hive boxes -- same kind as ours except he manufactures them from scratch himself. Out in the beeyard he waved away the smoker I lit up and just used his cigarette smoke to keep the bees docile. He and I went through the hives together, wearing no protective gear, we couldn't speak the same language but we were both beekeepers in our element. His son-in-law and (son-in-law's brother?), who do speak english, stand a fair distance away telling us we're crazy in both languages. He points out a bee and tells me what it's called in Hungarian. "Drone" I say. He sees the strip of apistan we put in to control for varroa mites and excitedly says "epi-ston!"

In about a month a coffee farmer from Venezuala is coming to see us to learn about beekeeping from us, I'm sure it will be much the same.


My departure to join the Peace Corps has been postponed to at least April, but I'm still expecting to spend most of the next two years keeping bees in the so-called third world.
My boss excitedly tells me about the best sources in South Africa to buy smokers and suits and other beekeeping supplies, but the thing is, beekeeping in a truly undeveloped area is NOT at all the same.
It's NOT economically viable to expect people in the interior of Africa to continually order boxes and other supplies manufactured a world a way and wait for UPS to deliver them. I don't pretend to know exactly what it's going to be like yet but I have some ideas and it doesn't include worrying about where my queens are being bred, ordering packages of bees, barrels of medication, or precisely cut hiveboxes.
We're going to have to be making whatever we need on the ground where we're at. Langstroth hives and boxes require machining resources we don't have but a simpler type of hive, the "topbar hive," can be assembled relatively easily from whatever one has at hand. A good knowledge of bee biology and behaviour can be put to use effectively getting the maximum potential out of bees in such hives. Smokers and protective clothing won't be readily at hand but I'm hoping existing garment makers and tinsmiths can be taught to make them and will find doing so an additional source of income, thus the region will be more self sufficient than if it were ordering from afar and developed in more ways than just bees. 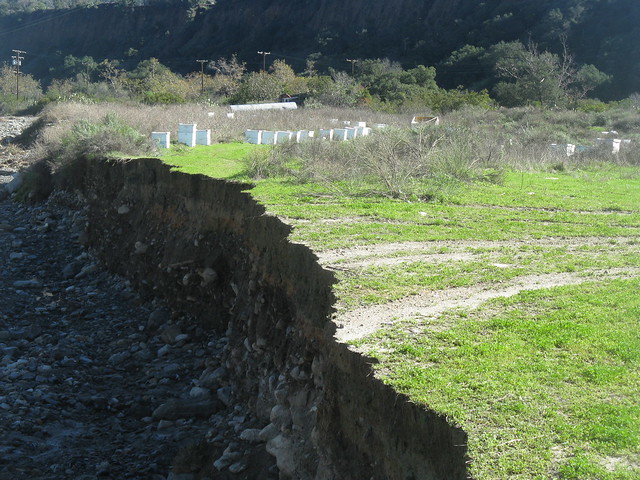 Floods, however, are universal. Note this is roughly the same view as the picture at the top of the entry but the embankment has eaten up much of the lantd in front of the hives.
Tags: beekeeping, lj idol entry, lj idol season 7
Subscribe