Dorothy walks along a suburban sidewalk in a neighborhood full of lush overhanging trees on a nice sunny day. She carefully avoids tripping over the uneven rises in the concrete caused by roots, while talking on the phone. Her call comes to an end in the shade under a tree. Readjusting her aviator sunglasses she lets out a deep breath as she puts her phone back in her pocket. "Well that phone call went as well as it could have," she thinks to herself, feeling proud that she'd stood her ground on the issue. "But I'm going to need to either find a new roommate or a new place to live" she contemplates with concern, pursing her lips to the side in thought.
Noticing a buzzing sound she turns a slow three-sixty but doesn't see the source. Then she looks up. Just inches from her head, hanging from a low branch, is a solid mass of bees about the size of a basketball. She lets out a shriek and runs down the street.

A bee we'll call Devra lifts off from the swarm and strikes out westward, rising at about a 30 degree angle. She continues over the street and between two houses before banking left. She keeps an eye out for predatory birds, which isn't hard since her compound eyes allow her to keep a wide arc around her in focus all at once. She banks sharply right at a particular point a few hundred yards later and descends to alight on the wall of a house just below the roof pitch.


About 25 days ago she'd first emerged from a brood cell as a new member of her hive of 60,000. She spent her first two days cleaning the hive and helping maintain the temperature in the central part of the beehive where the capped cells containing brood were located. On the third day she started to feel like she needed to help feed the larvae, partially because some of the older nurse bees had moved on to other things.
After about a week of feeding the larva, however, Devra began to feel she was encountering more than enough nurse bees and not enough work was being done producing wax and building comb, so she began to concentrate on building. Unfortunately Devra found that they had filled up almost all the space in the cavity in the old oak tree in which the hive was located. There wasn't anywhere else to build comb and the hive was starting to feel a bit overcrowded. Sp on day five of this Devra decided it was high time to start constructing peanut shaped "queen cells" to create a new queen to allow bees to split off and create a new colony, and Devra found that her fellow builder-bees were doing the same thing. Once completed, the Queen's attendants would direct her to lay an egg into each queen cell, and simply by virtue of a large queen cell and a steady diet of royal jelly these eggs would grow to be queens rather than workers. After this project Devra rotated into guard duty outside the entrance. After a few days on guard duty, Devra found more bees coming down to do guard duty so she took to the air to become a forager.


Back in the present, an elderly woman peers out her window at the bee swarm on the branch.
"Leroy! You need to do something about those hornets out there! They're going to bite someone!" she calls out to her husband in a slightly screechy voice.
"Okay okay I'll call the po-lice I guess" calls back her husband from their lime green kitchen, where he's reading the newspaper.


Elsewhere, Devra climbs into the gap between the roof and the wall on the house she's landed on. Inside there is a cavity between the outer wall and the inner drywall. Devra crawls along the sides, taking note of the distance. The area contains about 10 gallons of cubic space -- ideal for a beehive. The area also only has a very small entrance, ideal for defense. Altogether its an excellent beehive location. Already there are about two dozen other scouts from her hive also evaluating the location.


Two days ago the first new queen had emerged from its chamber. The old queen (whom we'll call Queen Amidala) and about 20,000 of the bees had subsequently left the hive and took flight in a giant cloud of bees. It flew only about 200 yards before settling on a branch overhanging the sidewalk. It settled in a sort of ball shape, with only a few bees in contact with the branch, most of the bees hanging on to those bees or hanging on to bees that were hanging on to those bees, etc. Somewhere in the middle would be Queen Amidala.
The bees that had been foragers now became scouts and dispersed to find potential nesting sites. The 95% of the swarm that weren't "field bees" yet would sit tight for now. When the scout bees found a good nesting site they'd evaluate it and measure it and then return to the swarm to report their findings. This is communicated through the "waggle dance," as a bee shimmies and twirls, shakes its rump and shimmies some more, to say, perhaps "go west across the street, cross between the tow houses and turn left, turn right after three hundred yards and it'll be the next house on your left, at the roof pitch."
Outgoing bees then will head out to check out the locations best reported by their predecessors. Eventually all the scouts will be headed to the same location.

A police car had arrived and the officer is very anxiously putting caution tape around an area enclosing everything within 100 feet of the swarm, as Devra returns. Elsewhere an exterminator sitting in his pickup truck receives a call from his dispatcher, new marching orders -- an emergency bee call had come in from the city. He finishes wolfing down his burrito from Taco Bell's 99 cent menu and starts punching "154382 Emerald St" into his GPS.
Back on Emerald Street, Devra begins her report: a shimmie, a twirl, shakeshake, shimmie...
Barely has Devra finished this dance then she realizes there's at least sixty bees present doing the same dance on the surface of the swarm, all indicating the same location. This certainly feels to Devra like enough of a consensus to make a decision about. She decides its time to move things along. Though she's never been involved in swarming before, she knows the next step. She starts trumpeting.
Almost immediately the piping is taken up by the other scout bees. A bee's flight muscles need to be about 95f in order to fly, and it can take half an hour from "cold" resting temperature to heat up. Upon hearing the piping, all the bees of the swarm decouple their thoracic muscles from their wings and vibrate them to warm them up. The entire swarm begins to buzz.

The exterminator gets off the freeway a few blocks away. In the back of his truck he has a number of buckets in which he puts the honeycomb he removes from walls. "DO NOT EAT" is emblazoned upon the buckets because he sprays beehives with a pyrethroid gas -- a synthetic version of the natural pesticide "pyrethrum" produced by chrysanthemums. The bees it doesn't kill outright spin on the ground like tops for a minute or two before dying. Any person foolish enough to eat the infected honey should immediately go to the hospital and have their stomach pumped. People still try to eat the honey out of the back of the truck sometimes.

The surface of the swarm is the last to heat up. As the piping bees feel the outside reach flight temperature they begin racing along the surface with their wings spread out, making sure the temperature is the same all around and everyone is on the same page.

The exterminator truck rounds the corner and rolls down the street. He comes to stop just outside the yellow police tape. He gets out of his truck, puts on a bee suit and veil, wrapping red duct tape around his ankles to prevent bees from getting into his workboots. Putting on green rubber gloves he pulls a cannister with a thin hose attaching it to a nozzle out of the truck and saunters over to the low branch at the centre of the police tape circle, and looks up.
There's nothing there except a small amount of wax the bees had attached to the branch.

Across the street to the west, a cloud of bees is just passing between two houses. In front of the cloud, Devra and the other scout bees dart ahead to show the way and then slow down for the cloud to catch up. A small child playing in his backyard stands and stares in awe at the cloud of bees that passes harmlessly around him.
Arriving at their destination, Devra and the other scout bees land around the entrance and use their wings to fan out a pheromone to help the rest of the swarm find their way in. Within a couple of minutes they're all safely moved into Dorothy's wall.


Technical Notes and Fun Facts
Special thanks to the article "Swarm Intelligence: How Tom Seeley Discovered Ways that Bee Colonies Make Decisions" in the January 2011 issue of American Bee Journal. I don't know about you but I'm just itching to get my hands on Seeley's new book, Honeybee Democracy. 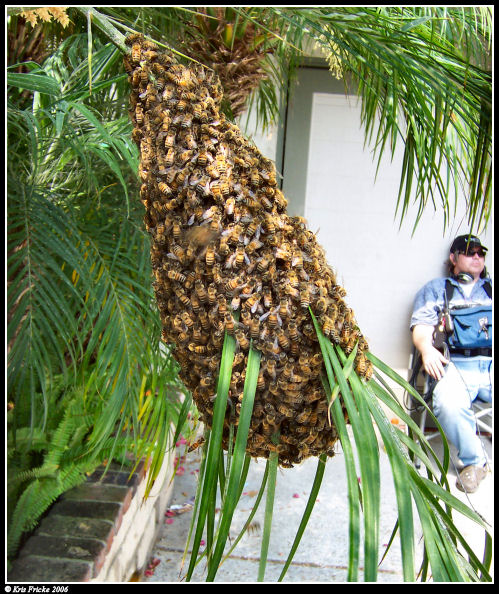