The Sincerest Form of Flattery

1425 AD, Constantinople -- Two young men walk along a dirt path bounded on both sides by golden grain fields. A light rain mists around them, filling the air with the fragrant smell of fresh dirt. To their right, over the city walls the Sea of Marmara disappears into the mist. Graitzas Palaiologos, has recently arrived from the provinces for an appointment in the bureaucracy - a position with the title of primicerius, in charge of a unit of palace guards.
"I'm just baffled by all this intrigue, Constantine, it's hard to keep track of who's plotting against who around here"
Constantine Palaiologos, the eighth of ten children of the previous Emperor, and younger brother of the current, nods understandingly. Graitzas had been extremely fortunate to quickly become friends with Constantine. Constantine is universally respected, trusted by his brother the Emperor, and without guile.
"I'm just so unaccustomed to the whole culture of the palace, I don't want people to think I'm just some country bumpkin who has floated in merely on account of being related to the royal family"
"Nonsense, by not being utterly incompetent and corrupt you're already overqualified for your position. Without attaining those qualities just imitate the general behaviours of the other officials and they should love you." says Constantine with a smile.
They trudge on towards the crumbling palaces, their spires and rusty green verdigris encrusted domes rising out of the mist above a huddle of ramshackle houses.
"Oh your younger brother Demetrios said he wants to meet with me" notes Graitzas cautiously.
"Ugh. Well don't imitate him. He's offered positions and refuses them, insisting he deserves something better, and he's always up to something"
"Yeah, well.. he told me not to even tell anyone, which is why I'm telling you, because I know you won't tell anyone else if it is nothing, but if there's something afoot I'd want you to know."
"Thank you Graitze. It's best to avoid getting involved in intrigues, but avoiding them often requires being aware of them!"
The squad of blonde bearded Varangian guards leaning on their axes at the edge of the remaining decaying city bow civilly as they walked by and then resume an animated discussion in their viking language.

Graitzas crosses the wet cobblestone square in front of the Hagia Sophia basilica. An owl hoots in a vacant upper window of the imperial palace to his left. A crescent moon is just beginning to rise over the rooftops to the East. Graitzas comes to a small door in a wall, looks about but sees no one watching, and descends the stone steps into the ground, to the enormous cavern of the basilica cistern. His small oil lamp only illuminates a small area of the thick humid blackness. It seems to stretch out to infinity, but exploration is only possible along the ledge around the outside of the deep pool that the forest of thick columns disappear into.
Graitzas steps up to the ledge to peer into the water. His reflection stares back up at him from the black cold immutable water. Several large ripples shake his reflection.
Wait, ripples? Graitzas looks up quickly to see what might have caused the ripples, and sees a wet muscular young man in the edge of his light, caught in the pose of one making great effort to walk without sound. In his hand the light gleams off a long curved knife. They stare at eachother in silence for just a second and then the assassin runs at Graitzas.
Graitzas may be new to court politics, and it's probably a good thing Constantine had advised him to always have a dagger on him, but, having served in the army prior to being posted to Constantinople, more familiar instincts now kicked in. In a fluid movement he rolls to the side and withdraws his own weapon from his boot. Leaving the lamp on the stone floor he lunges up at the assassin while the latter is off balance by the edge, but he recovers in time and dodges back. Now on equal footing they take turns lunging and dodging eachother's deadly blades. Graitzas may be a seasoned military officer but the assassin is very good, has a longer knife and is between him and the exit.
Swipe, dodge, swipe! Graitzas can't keep this up forever and the assassin looks to be in obscenely good shape and isn't encumbered with the robes and boots Graitzas is. In between lightning fast moves Graitzas analysis the situation for an advantage. ...Maybe he can use the assassin's lack of protective clothing to his advantage.
Graitzas allows himself to be pushed back a few steps toward where he had initially rolled, and distracting the assassin with a desperate flurry of daggerwork he "accidentally" kicks over the lamp towards the assassin.
The assassin takes the bait and lunges at an opening left to him as Graitze's back is against the wall. The spillt oil ignites around the assassins legs and bare feet, causing him to fumble in alarm. Seizing the initiative Graitzas plants a boot-clad foot squarely in the fire and forces the assassin back against the ledge. Quickly following through with a deadly strike deep into his chest, Graitzas sends the assassin reeling backwards into the water with a look of terror on his face.
Graitzas quickly steps out of the fire and watches the water for a moment as the ripples subside back to stoic inscrutable void. 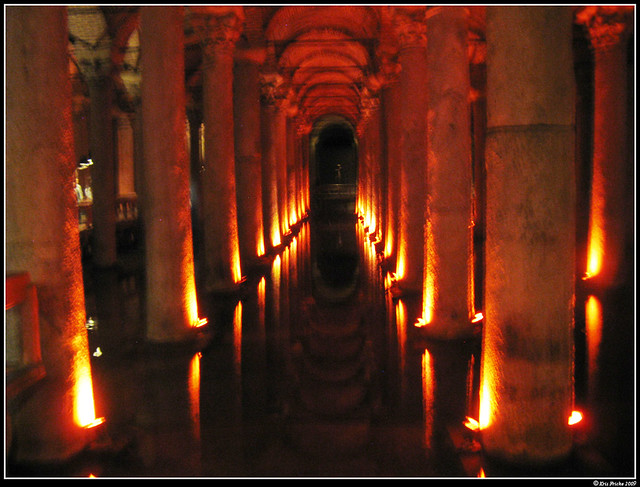 The cistern as it would look illuminated 585 years later

28 years later Constantinople would fall to the Ottomans in 1453, after a valiant defense by Constantine XI, leaving only a small area of Greece (Morea) remaining of the once mighty Byzantine Empire. Morea would be ruled by Demetrios and his younger brother Thomas... until in 1460 Demetrios invites the Ottomans in to depose his brother and set him up as sole ruler. The Ottomans quickly overrun the province, but the Sultan declares Demetrios is "not man enough to rule any country" and exiles him to someplace unpronounceable.
For about a year after the Ottoman invasion of Morea a single castle held out, commanded by one Graitzas Palaiologos. Eventually the Ottomans simply became tired of besieging the castle and left. Graitzas and his men found their country had been annihilated, they were the last undefeated crumb of the Byzantine Empire. Graitzas then took a job with the armed forces of Venice.
Demetrios' brother Thomas fled to the city of Rome where he lived out his days as the last official Byzantine Emperor (never having ruled in Constantinople though). And so it is that the last emperor of Byzantium, the successor state of the Roman Empire, eventually dies in Rome itself.