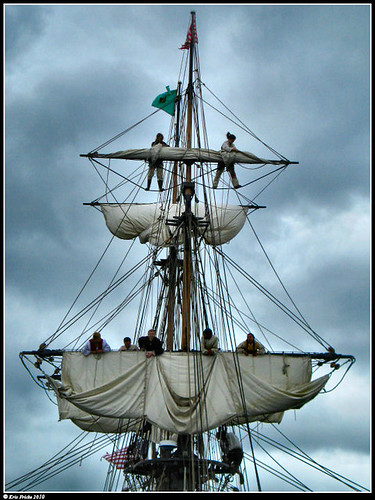 "HANDS ALOFT TO SQUIRREL!!!" bellows the captain, a large fellow with a huge fiery red beard. With a quick glance aloft hands note that "George" (the Washington State Flag) is waving towards port, so they scamper to the starboard shrouds and scurry quickly up the ladder-like grid of ratlins and stays. They don't hesitate when they have to climb upside down to ascend the futtocks shrouds under the top platform midway up the mast, and continue up the second set of shrouds. The first two hands to reach the upper topsail yard, about 70 feet above the rolling sea, swing around the mast to the port side and clamber out on the horizontal yard. The second two climb out on the starboard side and once they are all in position on the foot-ropes, they begin to furl the sails.


But let's rewind a bit, since "hands aloft to furl" is a command that would only be called for as we secure the sails to come back into port. Let's say we want to turn the boat so that instead of coming from the starboard side the wind is coming from the port* side. We're going to need to tack (turn) all the yards around so they are facing the other direction, and the lines that turn the yards are called braces, so we're going to have to call hands to braces, which might sound like "hands to main braces!!" ...or if the officer is feeling particularly saucy (which they frequently are), they might instead holler "HANDS TO BRAIN MACES!!!" (which relates to the sailor's perpetual fear of zombie attack)
Next we're going to need to pass the "head sails" (pronounced hedsels), the triangular sails on the front of the vessel, from the port side to the starboard side. This is done as the front of the ship passes directly through the eye of the wind, with the command of "Pass the headsails!" The front of the boat being relatively far from the captain, the command is repeated by hands along the length of the vessel until it gets to the bow, frequently changed at some point until it reaches the front as "PASS THE PRETZELS!!"
A less frequent command is to "board sheet the headsails" **, which is occasionally turned into "EAT THE PRETZELS!!"

After manoeuvering about for awhile, likely doing battle with those devilish people over on the Lady Washington (such as

i_id), it comes time to return to port. Hands aloft to furl (/squirrel) is called, and then the command "hands to mooring stations!" is made, which I always repeat as "HANDS TO BORING STATIONS!!!" and crewmembers report to the appropriate station from which to throw mooring lines and bring us up secure to the dock.

That evening, while most of the crew is at the Bad Monkey Tavern in Seattle, or Engel's Pub in Edmonds, or Moon Dog II in Port Orchard, or Mac's in Aberdeen, or The Dock in Tacoma or [etc etc etc] *** ... one crewmember must stay behind on "boat watch." At some point someone misspoke and referred to it as "goat watch" and it stuck, and ever since, watching goats has been the activity one was referred to as doing if one had to stay and hold down the boat.

One of my favourites, however, is "MAIN HORSE!" Three times a day our fearless cook Knuckles would alert us all to the meal being ready by calling out "MAIN COURSE!!" in each of the compartments. This in itself is an intentional nautical pun, since the lowest position for a square sail on a mast is the "course" and the course on the main mast is the "main course."
But having a fondness for intentional mispronunciations this command frequently gets echoed as "MAIN HOOOORSE!!!!" To this day when I'm talking to former crewmate Kori around lunch time we'll ask one another what they are main horsing upon, what they're main horsing down, or perhaps what is for primary equine.


While I'm on the subject, there's one other pervasive habit of sailorly speak that's worth remarking upon. Because when you're yelling from one end of the ship to the other through the wind, the inflection of your voice tends to get lost, we frequently add "questionmark" to the end of a sentence that is a question. For example shouting "should I rig the stunsel booms questionmark!" or "should I sky the rafee gear questionmark!" This habit extends to situations in which you can plainly hear the speaker's inflection anyway though, so any former crewmember from at least either of the two boats in our organization is liably to insert "questionmark" onto the end of any sentence that is a question.


* you can remember which side is which because "port" only has four letters just like the word "left," starboard and right on the other hand.. do not have four letters

*** I could probably tell you the best bar to go to in two dozen towns on the coast now (: 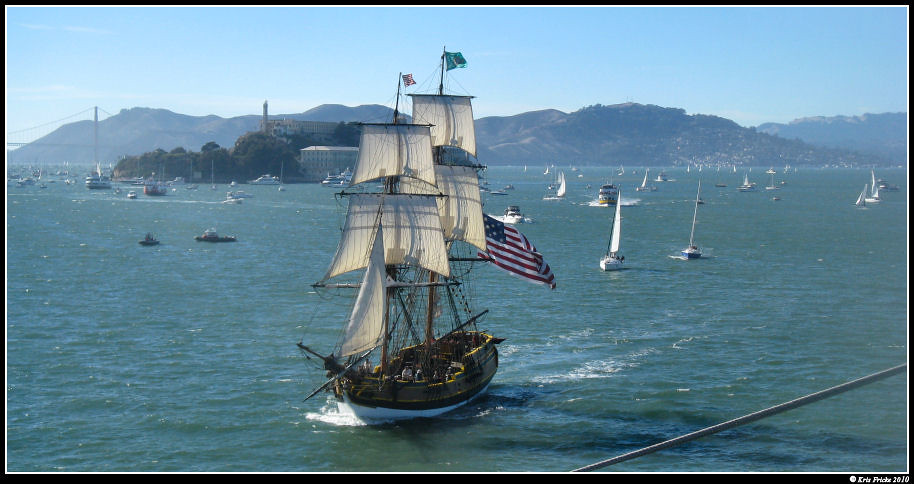 The Lady Washington in the San Fran Bay this October, as seen from the Chieftain's topmast
(I have nearly no pictures of the Chieftain at sail as I was invariably ON her)

I'm very curious if any of you out there (A) know if there is a word for this intentional mispronunciation of words, and (B) have any words you similarly intentionally mispronounce at your place of work, questionmark?

See Also:
My entries from when I was on the ship
My pictures from the boat
Voice Post about boat terminology I made but didn't use the week I got eliminated from Idol last year.