This past weekend was the annual Southern California Homebrewers Festival at Lake Casitas, California. This is my first year attending but my friends went last year.

We drove up Friday evening, it took a few hours to get there, and we arrived with literally only minutes to spare before the campground gates closed at 22:00. There my friends Mark and his girlfriend Courtney and I met up with our friend Adriana and her friend I'm-terrible-with-names, who had come up earlier in the day, and were already sitting around a campfire, and we set up our tents in the dark. 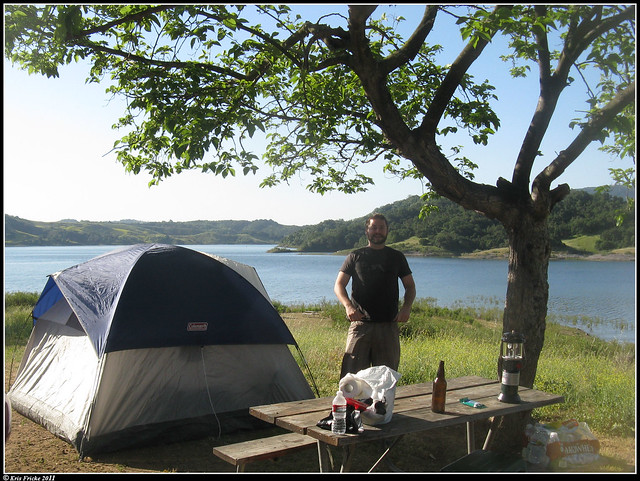 Saturday we woke up, had a quick breakfast and trotted down to the event area. There were about two dozen tents down there each representing a different homebrewing club, each of which had half a dozen to over 20 different home brews ready to be doled out! Unlimited tastings! 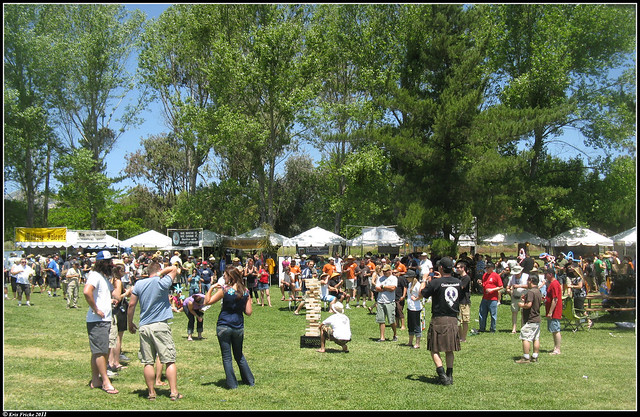 I partook almost entirely of stouts and porters, being as I prefer beer that is black and cold like my heart. Occasionally though I'll go for an ale if it sounds particularly intriguing, such as the "Kick a Ginger" ale made with ginger, which was delicious and definitely tasted like ginger. There were also numerous good stouts and porters made with chili, chipotle, or jalepeno peppers. And of course chocolate and coconut stouts as well.
By far the booth I was most impressed with was definitely the Beer Enthusiasts of Antelope Valley R-something (BEAVR), who had numerous very creative and delicious beers. My favourite two beers were the ginger one mentioned above and then the very last one I had, a bourbon barrel aged barley wine which tasted deliciously like caramel.

Tried a few meads and realized that as far as meads go, the mead we'd made at work really isn't half bad at all. In fact, everyone who tried the mead I brought said it was one of the best they'd ever had. But my proudest moment was when I encountered someone who remembered a beer I'd made last year.
Last year I had made an imperial stout and then put it in my 5 gallon american oak barrel immediately after I had emptied it of the (homemade) rum I'd aged in it for the prior two months. After two months in the barrel we bottled this beer and gave it another month to bottle ferment, but upon trying it I found it to be flat, suspected that the yeast had all died. Gave some of the bottles to Mark but then largely forgot about the beer myself, relegating the remaining bottles to the back corner of my garage.
Well apparently it did eventually ferment enough to have just the right amount of carbonation, and Mark brought it to the festival last year. We ran into someone this year who immediately recalled that beer from last year and enthusiastically exclaimed "that's the beer I've been raving about for the last year!!!" ::beams::
Anyway I had also brought several of the bottles with me this time, but it's been upgraded from a beer I forgot in the corner of my garage to something to be doled out sparingly, and we only opened one bottle for tasting. Everyone that tried it loved it though and exclaimed what a delightful rum flavour it has.

Despite the huge amounts of beer being consumed no one seemed to be out-of-hand drunk. I only saw one person puking in bushes. When I took a nap in the grass in the sun several people came by to ask if I was okay and/or recommend I move to the shade, and then when I got up and returned to the tasting I had a number of people comment that they'd seen me lying down earlier and were glad to see I was back up and at em. Such nice people, homebrewers. (:

It was a nice warm sunny day and in addition to the tasting booths there were a number of impromptu games going on on the grass, such as giant janga: 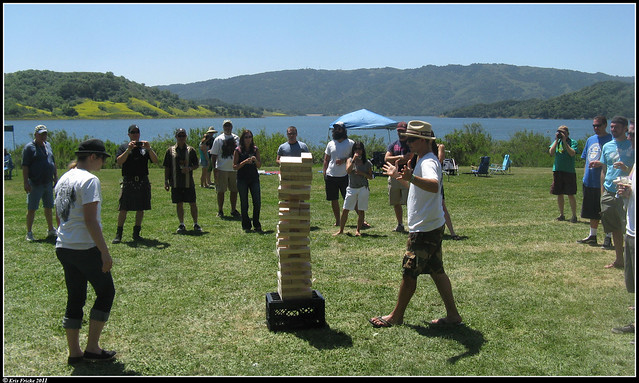 Saturday evening we grilled carne asada and corn-on-the-cob over our campfire and it was delicious. Sunday morning we packed up our tents and headed home, the end!

Slideshow! Which may mostly be of the giant janga game because I found people's postures and gestures as they played to be quite amusing. (: