The captain's on the quarterdeck, a squinting at the sails. Capt "Skip" Wehan is in his 70s, his hair is still a faded blonde, and to this day only one person is known to have beat him at arm wrestling. On the brig Pilgrim we don't tell Chuck Norris jokes, we tell Captain Skip jokes. Skip strolls over to Art, the first mate, and casually makes a remark to him. Art, an amiable fellow of about thirty with a verdant dark beard, walks up to the taffrail that separates the quarterdeck from the rest of the vessel, leans forward over it looking relaxed, and suddenly bellows "PREPARE TO TACK!!!"

Dozing in the warm sun on the main hold hatch, I'm on my feet and hurrying forward to the foremast before I'm even fully awake. Other crewmembers scramble to their sail stations from where-ever on the vessel they find themselves. Some are reporting to thee mainmast-captain, I'm reporting to Henry, the foremast-captain, who will coordinate all line handling pertaining to the foreward mast and the sails attached to the jibboom. We are going to tack our vessel, the 120' brig Pilgrim, turning it so that the wind hits it from the other side. The Pilgrim being a brig, has two masts, unlike things like "ships," which have three.

I feel there were three distinct phases I went through in learning how to sail tallships. (1) At first there is a mind boggling number and variety of lines and one feels hopelessly lost and extremely grateful if one can so much as see what everyone else is doing and grab a line someone hands you. This phase is usually accompanied by feelings of uselessness and shame.

Since we'll be bringing the front of our vessel through the eye of the wind as we turn the ship about, the first thing we must do is release the wind pressure up there, so we ease out the "sheets," the lines holding the "headsails" on the jibboom taut. As these sails begin to flog about, they whip the lines back and forth, lending the nickname "widowmakers" so these lines.
Next the spencer -a sail that runs from the foremast aft just over the deck-..must be tacked. It is hooked to the deck back near the main mast, and in order to get it can't simply be passed from one side to another because there's a line in the way. So our "hooker" must run back and unhook it, then up by the mast we haul in on the "brails" which pull the back edge forward up to the mast where it would be furled if we were done with it. But we're not done with it. As the nose of the brig passes through the eye of the wind and the wind starts to come from the other side, the hooker runs down the new "weather" side, holding the line attached to the corner of the sail and hooks it in.

(2) Then once one has learned most of the lines and what does what, one wants to always be the first one to the most significant line that needs to be hauled. Usually there are several sailors in this condition running into eachother in a desperate competition to haul the heaviest most prominent halyard.

Now that we are turning away from the eye of the wind it will help to have wind pressure on the headsails up front. As the bow comes through the wind the headsails are passed from one side to another by hauling on the sheets on the new lee side (since the weather (or windward) side and the lee (non-windward) sides of course switch as the wind does).
As some of us are attending to the headsails, some are attending to the braces. You know those big square sails stacked up the mast on a sailing ship? They turn around to face the wind, and the lines attached to the yards which are used to do this are called braces. Because you can't turn a yard around by hauling straight down on it, all mainmast braces run from the tips of the yards to the foremast and down to the deck from there, and the foremast braces similarly run to the main first. So as the brig comes through the wind we run to the (former) lee braces and "haul until you're heart explodes, and then haul some more!" But wait, there's more!
The lowest sail on each mast, called the course, is stretched out by a line pulling the windward corner forward (this line is called the tack, not to be confused with the sailing maneuver), and a line pulling the lee corner aft (called the sheet). At this point in the maneuver I usually find myself making sure everyone knows what braces to haul and then running for the sheet. To turn the sail to face the other way the tack and sheets must both be cast loose and then after it comes around the tacks and sheets on the opposite sides hauled taut.
And so we bring the mainmast stack around for those lazy lollygaggers on the mainmast crew (while they do the same for us).

(3) Once I felt comfortable that I knew all the lines completely, and didn't feel I needed to prove myself (to make up for that Phase 1 shame) any more, I found myself rather than in a cutthroat competition for the most prominent line to haul, looking to see what lines were going to be needed that were not manned. To unmanned lines I direct mooncalf-eyed Phase 1 sailors. If I have a line in my hand and someone is nearby who couldn't find anything to do (to be caught not doing anything during sail maneuvers is certain shame!), I hand them my line and look for another. If there is nothing left I watch the line run through the blocks overhead and make sure everything is running alright.
Unfortunately I've seen many experienced sailors seemingly get stuck in Stage 2, looking at lost newbies with contempt as they eagerly grab the line said newbie would have found in another minute.

The sail maneuver completed, the vessel sailing happily along on the new tack, we coil down the ends of all the lines we've used and hang them up again from the belaying pins.
Our work complete I make my way back to the main hold hatch to resume my previous position, just as Art leans forward over the taffrail... 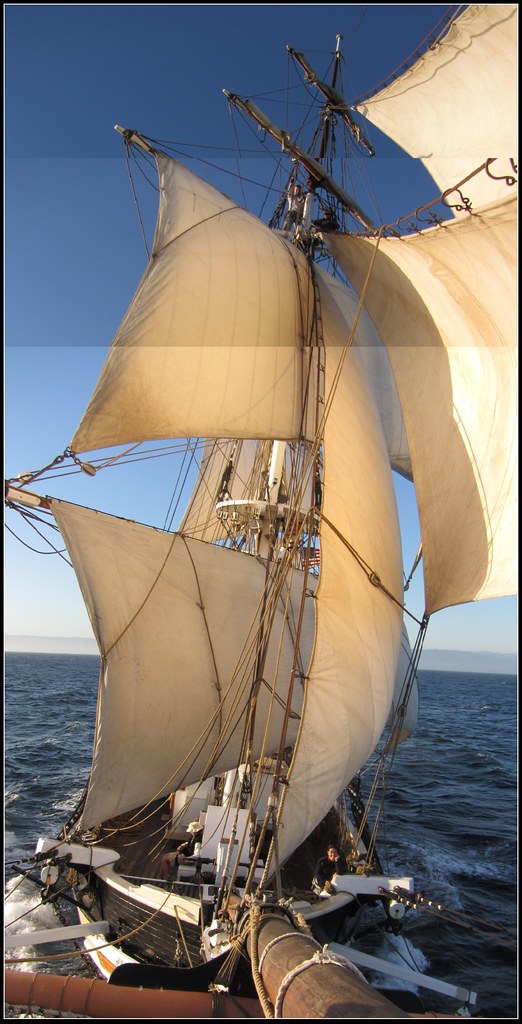 View looking back on the Pilgrim from the jibboom.