As many of you seem to know (for god knows people like to inform me frequently enough), an aerodynamics engineer sometime in the 30s famously noted that according to known laws of physics, bumblebees can't fly.

I came across an interesting article the other day about honeybee flight, and it addresses this interesting question:

"The problem was that the engineer was using fixed-wing calculations and not the flexible, hovering type of wing that bees have. However, there is still a serious physiological problem and that is the wings of bees move (flap) at 200-400 times a second, and this is at least 10 times the speed that muscles or nerves can operate"

So there you have it. They still can't fly.

Additional interesting facts: (1) there are no muscles in a bees wings; (2) bees have four wings. In fact one of the distinguishing differences between bees and insects that are not bees (such as flies which will sometimes try to look just like bees) is that bees have four wings. Each side has a hind and fore wing. These wings are normally hooked together but they can also unhook them (presumably for some useful purpose), and several diseases and parasites can cause their wings to become unhookable (so called K-wing syndrome). The oriental hornet I met in Turkey was suffering from this condition, making her two right-side wings clearly distinguishable: 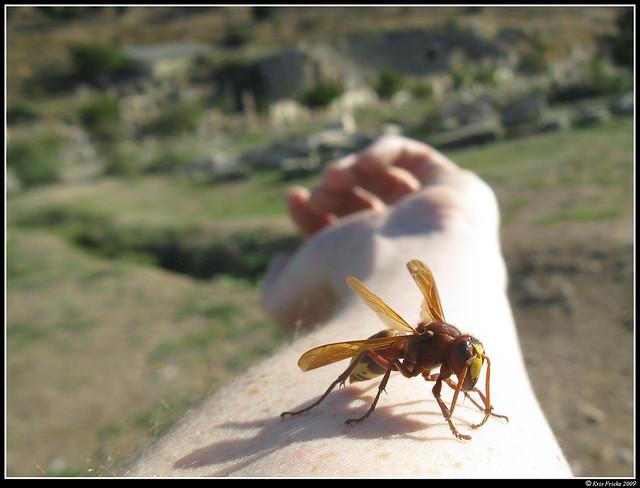 The thorax (middle section) of a honeybee is almost entirely muscles. These muscles can be used to tilt and maneuver the wings to control flight (the wings move in a swimming motion during flight), flexed to cause the wings to flap, or de-coupled from the wings and flexed simply to create heat.
This heat creation ability is interesting because while bees as insects are technically "cold blooded," they can actually raise and maintain their own body temperature. They must be around 95f in order to fly and must keep their brood about that warm for it to stay alive, but they themselves can survive as low as around 56f and will allow themselves to drop down that low if they don't have one of the above reasons to maintain a high temperature. See also, some bees are employed as living mobile space heaters.

As to how the wings move ten times faster than muscles and nerves can fire, the muscles put the wings into vibration "like a violin string." At 200-300 vibrations per second, it is, as you will notice, in the audible range. By so doing bees can move 50 millagrams of honey or nectar at a time, which is about half their body weight.


Quotes from "To Be Or Not to Be A Bee" (Part III), by Roger Hoopingarner, Bee Culture magazine September 2011