So let's say you're in Morocco, a rockin the casbah and perusing the bazaars. You happen across a booth where they are selling perfumes and ointments made from the rare and exotic argan oil of Morocco. Being a lass -or perhaps a lad named Dennis- with a penchant for perfumes and perfumers, you immediately buy some from the friendly merchant (who insists "a special deal for you my friend!", but actually fleeced you), and lather some of the sweet smelling oil all over your face.

Argan trees are endemic to the Sous Valley in southwestern Morocco, where the only natural argan forest in the world is a UNESCO protected biosphere. Goats love to climb these thirty foot tall trees to nosh on the olive-like fruit.

These goats are not just kidding around!

Now at some point, someone with a lot of chutzpah decided for some reason that oil could be extracted from these goats' subsequent droppings. How this was discovered strikes me as a mystery on a level with the question of who first thought of trying to milk a cow (seriously, clear your mind of the cultural norm that cow's milk is the natural product of cartons in the refridgerator section of the grocery market and put yourself in the flimsy shoes of a caveman staring at a saber-toothed woolly proto-cow and thinking "I'm gonna sneak up on that thing and squeeze its teat!").
Anyway, it turns out that apparently these goat droppings actually do make really good oil, and so it has become a regular practice in the region to press the oil out of the goat-leavings and bottle it for use in cooking and cosmetics.
Today all argan oil produced in Morocco is produced by women's cooperatives, which spread the profits among the women of the local tribes. In its journey from a goat's tuches to your face the oil provides 20 million workdays per year, according to wikipedia.

In similar news, you may have heard of the coffee which is made exclusively from beans that have traveled the digestive tract and been pooped out from weasel-like civets. I haven't experienced this coffee myself directly, but there's a pretty good beer made with it that I can recommend. 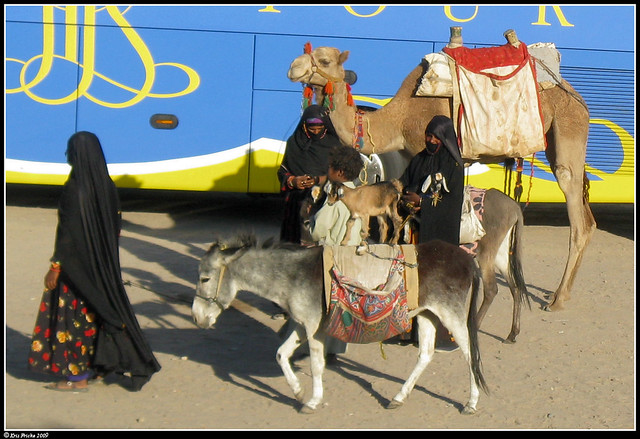 And here's a picture I took of a goat riding a donkey in Egypt.

Special thanks to my friend Aaron whom I consulted for more perspective on the yiddish usage of bupkes, and he instead brought this oil to my attention. And here I'd googled "goat droppings" several times already and only found piles of manure. If it weren't for Aaron I was going to have to write an entry about why bees sometimes paint their porches polka-dot and what to do about it!
Tags: lj idol entry
Subscribe
Previous
← Ctrl ← Alt
Next
Ctrl → Alt →
Previous
← Ctrl ← Alt
Next
Ctrl → Alt →