Getting Shafted by Airport Security

The following are true events that happened to me:

2006 - The diplomatic security agent leads me through the diplomatic security offices --which look a lot like any other offices: cubicles, copy machines, water coolers-- until we come to a very small square room. She tells me to take a seat and leaves the room, closing the door behind her. While I wait I look around the room: Chair and table both bolted to the floor; large floodlight on the ceiling pointed at me (fortunately not on); security camera unobtrusively placed in one corner facing me; and what I thought was a mirror on the wall in front of me I realize is actually almost certainly a one-way window. "This is the room where they beat people with hoses!!" my inner monologue exclaims to itself.

Five minutes later I'll find myself explaining some of my opinions on America's airline security to Diplomatic Security, but let's back up first a bit.

2005 - I'm standing in the the security checkpoint line at Sacramento international airport, a college student on my way to San Diego to chair the International Law Commission (ILC) at a Model United Nations conference. Back then the airports hadn't yet learned how to properly digest the backlog at security checkpoints caused by heightened 9/11 security, so the lines tended to be painfully long. As I slowly work my way through the line I pass the time thinking about such things as "transnational liability for accidental pollution," "legality of reservations to treaties," or, one of my favorite ILC topics, "the legal status of unlawful combatants."
Finally I arrive at the x-ray conveyer. I place my bag, my laptop, my briefcase, my belt, and other requisite objects on the conveyer. I'm wearing my suit because I'll need it that weekend, and can't be bothered to haul around a garment bag. Lest I give the erroneous impression that I look thoroughly straight-laced, I should mention I also had a rather tall green mohawk at the time and had just placed the paratrooper combat boots I always wear (even with a suit on a most occasions) on the conveyer belt.

Despite my careful removal of all metal objects I'm surprised not to set anything off as I walk through the metal detector -- but my luck ends there. I look up to see a large African-American TSA agent blocking my path in a surly manner. "You've been randomly selected. Sitinthatchair."
I move towards a nearby chair "NOT that chair!" he barks. "Stickyourlegout" he says in a mumble I can barely understand, followed by "NO notlikethat!"

He inspects my bag and just as I think this unpleasant hassle must have run its course he triumphantly pulls out my gavel and holds it up!
"Whatisthis??"
"That's a gavel sir"
"It's a hammer-like object, you're going to have to leave it with us."
"Uh, no. That has my name engraved on it and I'm going to need it this weekend." I'm becoming quite alarmed. Seeing as I'm not going to take this one lightly he calls his supervisor over. Eventually we reach a compromise -- they'll unscrew the shaft of the gavel and I can keep the head of it. That way I can keep the engraved section and if I can find a new shaft it's whole again, while for their comfort it is no longer a "hammer-like" object. It seems to me that the gavel would probably be a more effective weapon without the shaft anyway, considering the shaft would must assuredly break if it was ever used to do more than make a stern hammering sound on a table (though maybe with it I could take over the plane through cunning use of robert's rules of order?).

The TSA agent who had been hassling me finally moves his attention to the next passenger, politely greeting an African-American gentleman in a friendly manner. I had previously chalked up his malignant demeanor towards me as him being in a bad mood or perhaps just being an unpleasant person in general, but when I saw his behaviour change 180 degrees when he was addressing someone of his own race I was shocked all over again -- I'm quite convinced I was just the victim of racism.

I proceed to my gate still fuming over the desecration of my gavel. A symbol of justice and they had destroyed it in their insane quest to enforce largely arbitrary rules on people. In my mind I inventoried all the other weaponable objects that people are allowed to bring on planes every day -- belts with belt-buckles is a big one, sharpened pencils, anyone could smuggle on some fishing line and proceed to garrotte people with it... really banned items such as nail files, cigarette lighters and, apparently, gavels, are not even as weaponizable as things large percentages of passengers do or could bring on board every day.

2006 - The very month I graduated with my degree in international relations (with the "Peace & Security" emphasis) I interviewed for a job with Diplomatic Security (ah I was young and naive then, thought my degree somehow would qualify me for a job), and during my interview with dipsec, when they asked me "do you believe current airport security measures are effectively protecting the American public, I had an answer for them. I was able to give them an extensively thought-out answer about the utter ineffectiveness of airport security, not only through the numerous weaponizable things people are allowed to bring through security, but for other reasons such as "nearly every airport has restaurants on the inside of the security checkpoints. These restaurants presumably have knives. If our security depends on Al-queda not being able to infiltrate McDonalds, we are probably not actually very safe," BUT, I concluded, these invasive security measures probably do accomplish their intended purpose: making the American public FEEL safer.

As a result of this sassy answer to the question ... I got advanced all the way to the second-to-last of the six layers or so of screening. (They seemed disappointed I didn't have any special skills such as scuba-diving or parachuting, and apologetically informed me that "you know, there aren't very many positions open and they usually almost all go to ex-military people." And so, I'm not a diplomatic security agent, and you are hassled at the airport because it makes you feel safer. 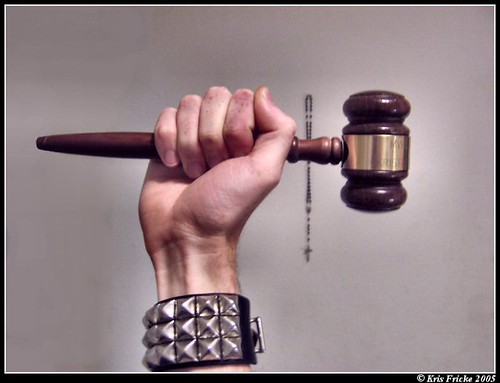 And here's my gavel after being reassembled