My main email address is at yahoo, and as a consequence of this I happen across the yahoo main page every day. And as such, I am subjected to their ideas of what is "headline news" every day ... and it's frequently blisteringly inane and stupid.
At this moment it is "Celebs who called it quits in 2011." A little earlier (and still displayed in bold and much more prominently than any real news) it was "Mark Zuckerburg's Holiday Vacation." Apparently he went to Vietnam. And rode an ox. And we should be shocked because Vietnam is a communist country. Or, as the story's second sentence informs us "The Facebook founder is vacationing in the communist country that blocks its citizen from using his social networking site." Oh really, they only have one citizen?
The article was kind of like a train wreck (or the Family Circus cartoon), where I just kept reading it to see just how bad it was (family circus is particularly insidious because all it takes is one careless glance towards it on the page and you've gone and accidentally read the whole thing).

Another news item that kind of alarmed me today was "Ex-Aid: Ron Paul Foreign Policy is 'sheer lunacy'," not, in this case, because it's not relevant, but because its so biased. Don't get me wrong, Ron Paul has some stances many might find unsavory (he's very pro-life for example), and many that are radical no matter how you look at it (he wants to eliminate a whole bunch of government agencies), but I believe the media should report his stances for what they are and not try to tell us how sheerly lunatic we should think they are.
Granted the article is quoting someone in saying that, still the "sheer lunacy" quote is very prominently in the headline, and in the conclusion the source's conclusion of "simply outrageously horrendous views on foreign policy" is once again prominently displayed.
Yes, I disagree with the policies the article alleges he supports (that Israel should be abolished and we never should have gone to war in Afghanistan), but I think an article yahoo displays on their front page ought to let us make our own conclusions about whether those are "simply outrageous" policies. The article also does not include any comments from the Ron Paul campaign about whether or not he actually supports the policies alleged, which is a pretty important piece of information.


In conclusion, here's a totally unrelated picture I took of my coworker hanging out with a tarantula hawk: 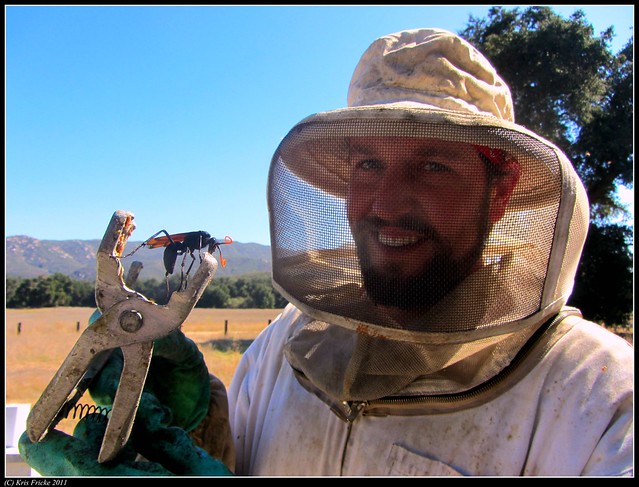