"How many cups of coffee have you had today???" my dear mother inquired of me earlier today as I bounced around the room rambling excitedly about random things.
"Oh just one of those small cups, maybe two?"
"Hmmmm that shouldn't be enough to make you act this wired"
"I'm just excited to be leaving for Nigeria tomorrow!!!"
"Aren't you at least a little concerned about anything?"
"Nah, now which of these pills cures malaria and which one gives me violent diarrhea?"
"CURES violent diarrhea Kris"
"No it says right here, 'take one a day for violent diarrhea'..."

Admittedly being prescribed pills for the abovementioned potential ailment concerned me a bit. Mostly I'm just very very excited though. But as this season apparently this is going to be a blog about my actual life, let's go back to last week, right after last week's entry. 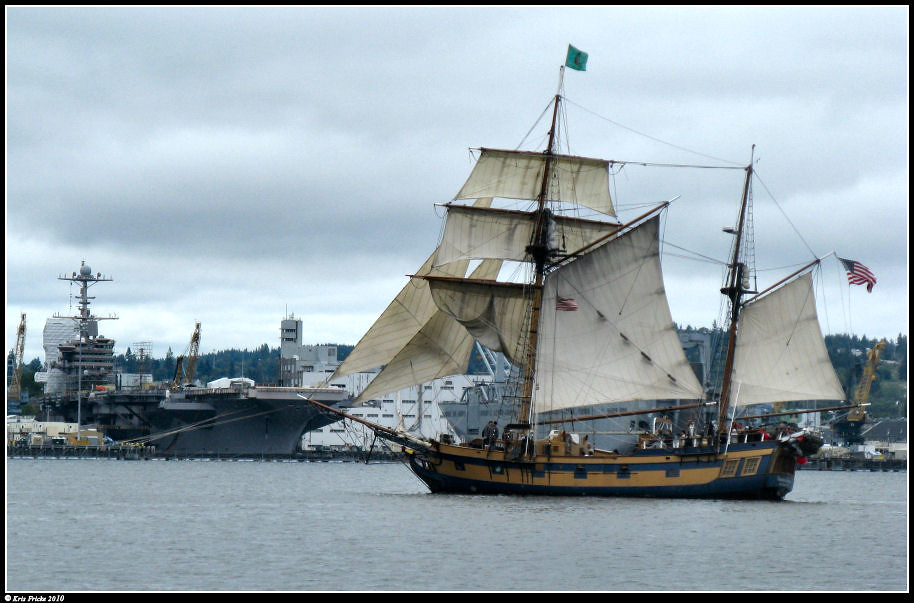 The Hawaiian Chieftain in Bremerton back in 2010

Monday Night / Tuesday Morning, 0300 hours - normally I sleep like a rock every night no matter what or where. The sounds of the storm and the extreme rocking of the entire room didn't concern me, but several times my slumber was interrupted by a crashing noise on the deck above me so loud that I'd be wide awake and tensed for the general alarm to go off or a frantic cry of "ALL HANDS ON DECK!" ...but it never came.
Time seemed to be passing so slowly I was sure for awhile somehow I hadn't been notified of my watch at 0400, but finally someone came down to tell me I was on.
On deck I find we have four square sails set and one of the jibs, the wind is howling up from behind us and we're steering northwest by west 12 miles off the coast somewhere near Santa Barbara. I find out that the crashing noises were because one of the 250 pound cannons broke loose from its lashings and went galloping around the deck, and then later some other large heavy deck boxes went on their own little promenades.
Most of the crew has bright yellow rainslicks for foul weather gear but I like my wool peacoat and wool watchcap. Sure it tends to absorb the water, but then you get a sort of wetsuit effect and are if anything even more insulated.

We do a few sail adjustments while we still have two watches on deck and then the previous watch hastens down below to try to get some sleep. I'm on lookout for the first hour, which in these conditions just means standing by the helmsperson on the quarterdeck (while holding firmly on to something!) and trying your darndest to see any lights or other things in the darkness around us (there was nothing to see).
Once an hour on the half hour someone does "boat check," which consists of checking all the bilges to make sure we're not taking on water, and normally checking on all the engine gauges but the engines were off. Sea sickness is always much much worse belowdecks so doing boatcheck while you're pingponging around below can be a grueling experience sometimes. I thanked my lucky stars that for some reason I happened to be spared the ravages of sea sickness entirely this time around -- I won't pretend I never get sea sick and sheer experience is no guarantee of immunity, last transit I was on our two most experienced sailors were sick as dogs the whole time.
Eventually I spent most of the watch on the helm. For reasons that baffle me, most people seem to abhor manning the helm. I think it's much much preferable to the boredom of standing lookout when there's nothing to see. Time passes much faster as you work the wheel. Steering a ship is not like driving a car where it continues in a straight line so long as you don't move the wheel. Because you're constantly being buffeted by waves and wind the boat will NOT maintain a steady course, and it's kind of like driving on ice in that there's of course zero friction underneath. As such it doesn't start to turn immediately when you start turning the wheel and it doesn't stop turning immediately when you stop turning the wheel. So it takes some getting used to. And the compass, for that matter, which in these conditions is all you have to steer by, also is not perfectly frictionless, so it doesn't necessarily begin to turn the moment the boat does or stop the moment the boat stops.
Fortunately our vessel has an old fashioned compass with the cardinal directions (NESW), the ordinal directions (NE, SE, etc), the subordinal directions (north north east, east north east, etc), and even the subsubordinal compass points ("north by east," "northeast by north," etc) at least marked by little triangles. I say fortunately, because while a lot of sailors of modern vessels scoff at the traditional compass point system, in the dark on a rainy night seeing 303 on a compass is pretty hard but finding the little triangle that denotes "west by northwest" is a lot easier! For awhile we were sailing west north west, which is marked by a diamond on the Chieftain's compass, which frequently got the sea shanty "the bonnie ship the diamond" stuck in my head as I'd think about that little black diamond on the compass I was trying to steer on.

The sky slowly brightened until eventually it was 0800 and the next watch was up to relieve us. By then the worst of the storm was over. The captain, who is not on a specific watch, had been up almost the entire night. Despite the exhaustion he was pretty twitterpated himself, we'd gotten the vessel up to 11.2 knots under sails alone, which is really screaming along for a ship like ours. We made some sail changes once again while we had both watches on deck, ate some breakfast our fearless cook Knuckles had whipped up (I swear no storm can deter that fellows cooking one bit) and then, along with the captain, went below to get some much needed sleep.

Tuesday, 2200 hours -- we finally went aloft to furl the sails as the twinkling lights of the golden gate bridge loomed up and over us, and the city of San Francisco shined like a pile of diamonds to the starboard. We turned to port and motored up the the mooring area off Sausalito, and let fall the anchor.

Tomorrow (Sunday) morning my flight leaves at 8:45, and voila 27.25 hours later I land in Abuja the capital of Nigeria! From there I still have to get to Ibadan some 360 miles to the west-south-west, I don't know how that's happening but the field staff presumably have a plan. I'm sure I'll write about it here when I get a chance, whether or not I happen to be near a computer during next week's LJ Idol submission window. In the mean time, I'm just twitterpated. :D