Economics and Royalty in Nigeria

I only have about five hours left here in Nigeria. Currently in the capital, Abuja. Met with the USAID officials this morning for debriefing.

Altogether I think my mission has been successful. I taught the Igbalode Beekeepers Association members some ways that should really improve the quality of their product, increase production, and make better use of wax. Per hive production can be increased to a certain degree but I really hope they increase their per person output, as any one of them could be running as many hives as the entire 25 person membership of the association currently runs in their one bee yard.
There are two principal impediments to them increasing their number of bee yards. One is simply giving the less involved members of the association the confidence and knowledge they need to go out and run a bee yard on their own. The other is a greater problem -- that most farmers in Nigeria fear to have beehives anywhere where they can see them from their field. There's lot's of open space but from the typical farmer's point of view, if they can see the hive, it's too close. This mentality is hard to address.

Last week I found myself in what felt like a UN summit meeting. In a large relatively nice hall there were about 20 of us around a U shaped table, on the bend of the U were the top administrators of the Oyo State Agricultural College in fancy suits, and in the middle of the U several photographers snapped photos. Myself and the college apiarist (fancyspeak for "beekeeper") were across from eachother and thouh ostensibly the entire meeting was so we could talk to each other I could barely hear him over the fans whirring behind us.
Many of the future farmers of Oyo State go through the agricultural college so if the apiary is up and running (it currently sounds like it's kind of flopping) I'm hoping it will not just train beekeepers but train the crop growers in the value of pollination. In the United States beekeepers get 70% of their income from pollination and 30% from honey sales. And you know farmers aren't going to be paying beekeepers more than is cost effective for them. That 70% that beekeepers get from pollination is because it increases the value of the farmer's crops to a greater degree than that value. A project proposal is currently being written up that would send a volunteer, presumably myself, to the agricultural college to get that program up and running as soon as possible. 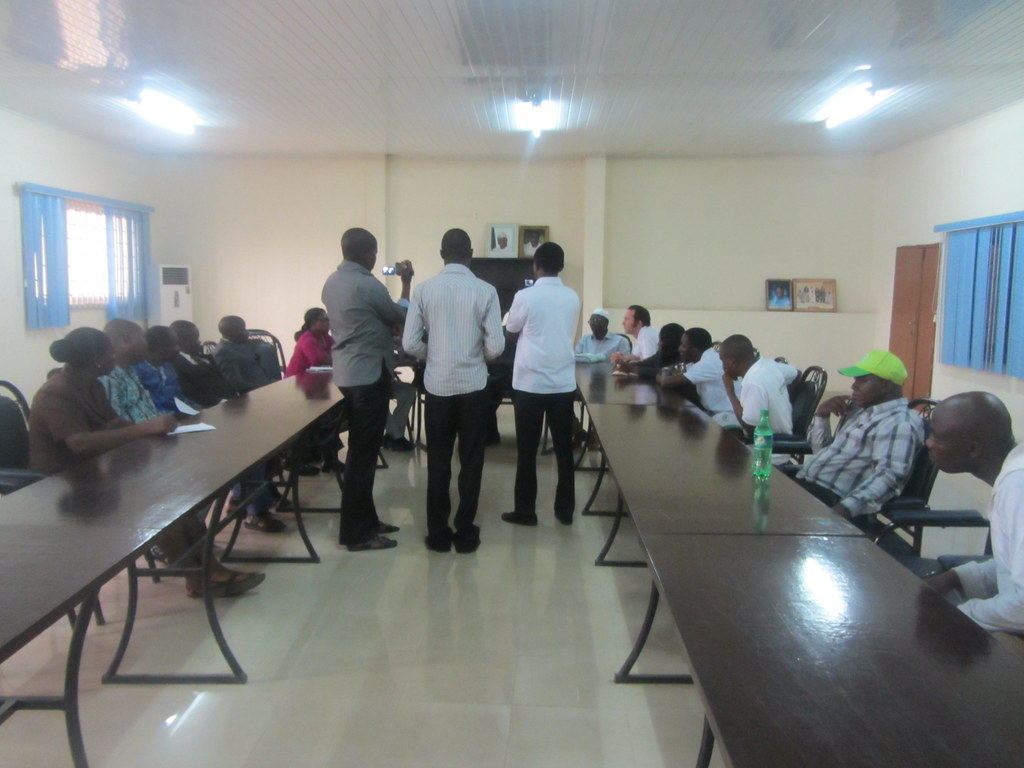 The other conversation that then ensued at that meeting was from some of the Igbalode beekeepers asking why the college is using the more basic "kenyan topbar hive (KTBH)" and not the modern "langstroth" hive. Apiarists were saying the langstroth hive is too expensive for the common farmer and therefore not practical and therefore they weren't interested in it, but some of the beekeepers clearly didn't agree.
Reading some of the "end of project" reports from previous volunteers I noticed some of them talked about "the need to get people to use the right kind of hive" (which they don't elaborate on but I think they mean langstroth?) and promoting langstroth hives. The langstroth hive is definitely seen as the "developed" way of doing things here in a "developing" country that earns to move forward.
And even as I spelled it out for people I could see sometimes I was accidentally selling them on langstroth hives. I'd lay out that a KTBH costs about $15, and a langstroth costs about $170.. the KTBH makes 10-12 liters of honey and the Langstroth makes about 25. They can make $150 a year with a KTBH, or $350 on a langstroth. And I get to that part and the person's eyes light up and they exclaim "25 liters?! 65,000 naira (the Nigerian currency)?!? How do I get one of these???"
And then I just want to facepalm. Because if something costs ten times as much, and produces twice as much... you're still way better off buying ten of the cheap version!!!

Granted the langstroth SHOULDN'T cost so much to make, but it's a bit more complicated carpentry to make and is not currently being mass produced here. So first there need to be enough competent beekeepers to make the investment worthwhile, and then enough langstroth hives need to be ordered from the same place to make mass production make them cheaper. You can't just import the wheel where there are no carts, you must reinvent the wheel ;) 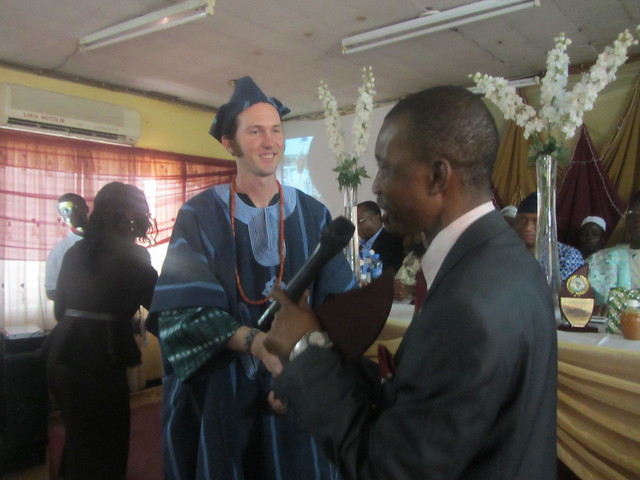 In other news, at the closing ceremonies of the training program, they conferred upon me the title of "chief!" 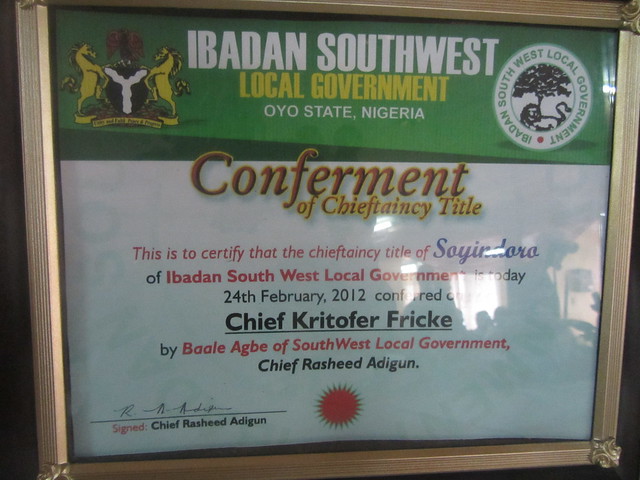 Since then I've been trying to figure out what that means exactly. It's definitely a very real, official, and legitimate thing. Apparently it was also announced over the local radio. I think it's kind of like an "honorary doctorate," except "honorary" isn't in the title, apparently I am a Nigerian chief now.
"Yes but I wouldn't go around telling everyone that" advised my dear associate Koriander from back home. Well they gave me a beaded necklace to wear that apparently is tantamount to "going around telling everyone," because in my entire trip from Ibadan to here I had countless people very respectfully refer to me as chief.
And that trip, btw, was a bit interesting. The flight out of Ibadan they had sold too many tickets so even though I had a ticket in hand there was no room on the plane. And it was the only one leaving Ibadan that day. Not too weird really, airlines in America oversell their flights too. So we drove two hours to Lagos to catch a plane there. But THERE the flight didn't leave for about an hour after it's scheduled departure because they were waiting for more tickets to be sold!! What is this a bus??

I've also been informed that some people spend millions to try to buy the title of chief, and when they succeed they throw a huge party and henceforth insist that everyone always call them chief (don't worry I'll forgive you if you forget some times ;) ). And then I met a prince who happened to be shopping in the grocery store (you know, where you usually meet princes), and he bowed to me and called me "your majesty" and explained, if I follow it right, that because princes hold their title by virtue of their father being a king (btw there's not just Nigerian princes, but Nigerian kings too!), but chiefs hold their title in their own right, and so are more honored than princes.

And then I met a honest to goodness princess: 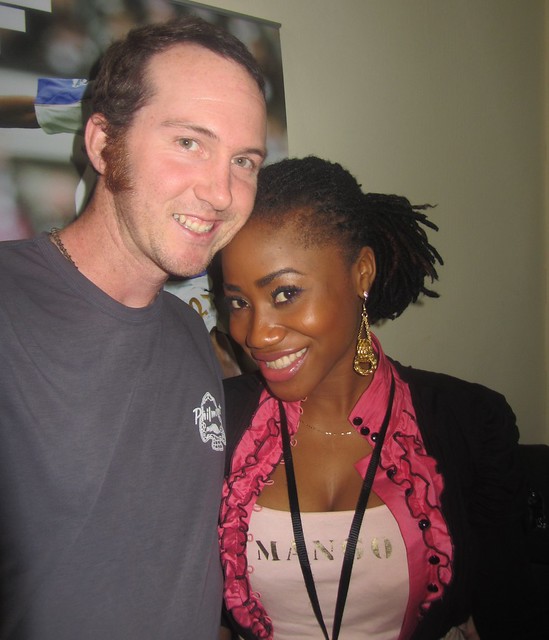 She was working in the hotel lobby selling property in Dubai (?!?!?!). Nigeria sure is a weird place.


Pictures! (Many more still to upload)