Saturday -   Flight from Orange County to Atlanta was unremarkable. In the Atlanta international terminal they have some interesting displays of goods they've confiscated from people returning from Africa.

On the 10 hour flight from Atlanta to Lagos I lucked out to an extreme degree, no less that TWO seats beside me were vacant so I was able to curl up across them and have only mildly extremely uncomfortable sleep. International flights these days also let you watch any of two dozen or so movies for free, which is nice, but between last trip and this one I think I've already watched every movie they have that I have any interest in seeing.
This time I watched Appaloosa and Drive. Both were relatively unremarkable examples of their genres (western and crime/car-chases respectively), with the added observation in the case of Appaloosa that Renee Zellwigger can ruin a movie all by herself by the power of her being incredibly unattractive and irritating. Seriously why do they ever cast her as a romantic interest??

Landing in Lagos, after I picked up my box of beekeeping supplies a uniformed officer stopped me near the door and asked me what they were, and then was asking me to open the sealed box. I wasn't terribly excited about this. But then he noticed the chieftaincy beads on my wrist and asked if I was a a chief and what my title was. On being informed it was "soyindaro" (which means maker of honey into wealth) he looked at me with a bit more respect and asked "so you are an expert on honey? okay you can go."
To get from the international to the domestic terminal in Lagos required a taxi ride of 3000N ($19), which was kind of irritating. Then I find out my flight to Abuja has been cancelled!
Fortunately though the airline got me a new one on a different airline that left around the same time.

Arrived in Abuja amid a lightning storm. Saw a news headline that a woman had been hit by lightning in Abuja the previous day. Also in the news this day (Sunday) there was another bomb blast in Kaduna, the state just north of Abuja. The bomber's vehicle had been refused entry to the street on which his church target was so he drove away and detonated in a busy intersection.
As I'd find out shortly, the previous day (Saturday), Winrock staffmember John had been robbed in Lagos. He'd gone there to meet up with his fiancee who was returning from abroad, and armed men stormed the hotel. He was relieved of his laptop and other valuables at gunpoint. But don't worry the Nigerian police are on it -- they've arrested all the hotel staff.

Monday Winrock Nigeria country director Mike took me sightseeing around Abuja with his family. His family had lived in Kaduna but he recently moved them to Abuja because it is safer. The highlight of my day though was seeing some birds called Quelea or "weaver birds." They were bright yellow and fluttering all about this palm tree that had filled with their woven nests. I took a heap of photos of them. 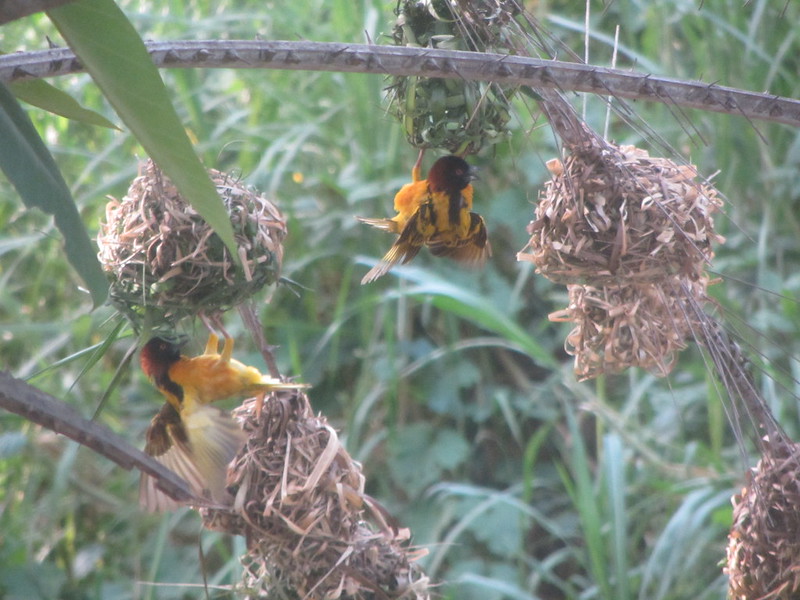 Tuesday (today) we (the winrock driver Blessing, John, and I) drove three hours or so to Lafia. At the hotel here the AC doesn't presently work (they're working on it), so all I have is a ceiling fan. It is QUITE hot. African party music is blasting from the DJ stand out by the pool (which also, incidentally, is just outside my window), it is 11:30 in the evening, and there's not a single person out there enjoying the music.
I asked John why the largest note in the Nigerian currency is the 1000 niara note (about $6.30). He said the economists are worried that if they introduce larger bills it will devalue the currency, pointing out that when the 1000 was introduced the 1s and 5s fell into disuse. It seems to me this is mistaking cause and effect, but in the mean time paying my hotel bill with a fat wad of 100 1000s strikes me as rather inconvenient.
Otherwise, met with the YMCA (host organization) leaders today and tomorrow the fun begins!