Friday - Today we drove two hours or so to a town called Garaku. There we met with probably two dozen beekeepers and eight or so honey marketers. Once again the overwhelming majority of the beekeepers use the traditional bees-in-a-log hive.

Amusingly, when I asked what a typical honey price here was there was a hubub and finally someone informed me "the beekeepers are shy to name a price with the honey marketers here." So I told them just name a price they'd be totally comfortable selling it to them for or something. Finally I was informed that the beekeepers couldn't afford to sell their honey for less than 15,000 niara / 20 liter jerrycan ($94.94) and the marketers wouldn't buy honey for more than 10,000 niara per ($63.29).
I tried to dispell their awkwardness by pointing out that in the US, beekeepers sell their honey directly to the consumer for $6-8/lb (and I've seen it in the store for $10-12!), or that which they don't have the time / market to sell directly they sell to bulk honey dealers for appx$1.70 (this number goes up and down like the price of gas but it's generally in that range).
After converting liters to gallons to pounds (honey = 12 lbs / gallon) to dollars to niaras we figured out that would be 16,116N for the jerrycan at the bulk rate and 56,880N at $6.

Anyway the group had many questions for me and ended up asking if I could come back another day. We have a lot of communities to visit though so I don't know.

Leaving there we stopped by the village to meet my host (the YMCA Agg director)'s aunt. This was fun because I'd never really been in a village before. There were lots of interesting things to see in there, like a grane silo-hut-thing I don't even know how to describe (but fortunately got pictures).

Down one street we saw a crowd and someone appeared to be dancing about in a head-to-toe costume of feathers with a mask on, which I was excited about but Ango hurried us the other direction. I don't know if he was just in a hurry and didn't think it was interesting or actively didn't want us to see it.

Another interesting thing I learned today is that while there are traintracks crisscrossing Nigeria, the trains haven't run at all in over ten years. Similarly, while Nigeria is a major oil producer and exporter, they're also a major oil IMPORTER because all of their refineries are run down. And I've seen a lot of seemingly abandoned not-terribly-old construction equipment sitting with flat tires getting overgrown.
At least in the case of the trains, I'm informed the trucking companies are all against the trains being revitalized. 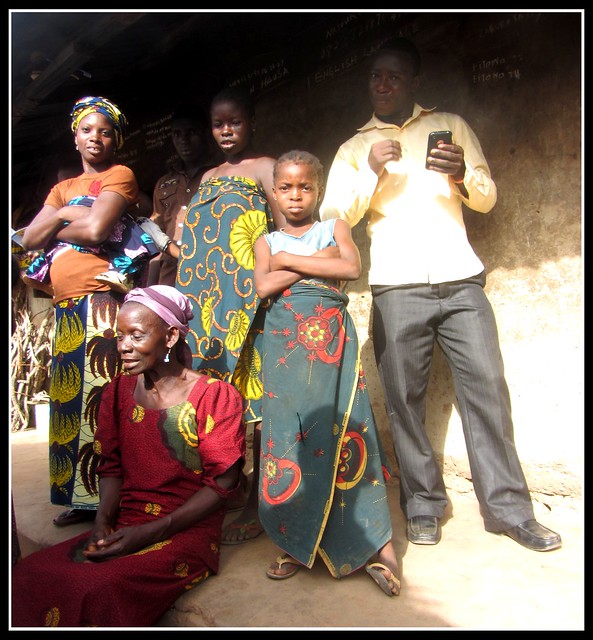 I had taken the time to write a caption for each one and then when I hit save the browser borked and lost them all. Argh. Well I'm not rewriting them tonight. d: