Friday Night - It rained so hard I felt like I was in a typhoon. I was sitting on the hotel balcony watching it come down, but wind was causing the rain to come down at enough of an angle I was concerned about getting water on my laptop so I retreated to the hallway. There I was still getting blasted with wet wind though so I had to withdraw all the way to my room.

Saturday - We (Blessing (the Winrock driver), Ango (the YMCA Agric Director), and I) left the hotel in Lafia around 0900 and drove to "Mada Hill station," a town and stop on the train route (which, as I mentioned, hasn't run in ten years). There we parked the car and waited under some mango trees for some motorbike drivers to be rounded up. It was really quite pleasant. The air was cool from the previous night's rain, and on the benches under the trees it was thoroughly comfortable.
Once three motorbikes had been found, we proceeded on the lengthy trek up the hill. first it was past small villages and huts and their surrounding yam fields and then we started climbing the hills. In places we had to get off the bikes and walk them up particularly steep rugged parts of the trail. About two hours later we reached the village. I'm informed motorbikes only reached the village in October of last year, and other than that the only vehicles to reach the village were some range rovers in 1956.
Most of the honey collected in this village (called Ogabi or something like that) is from honey hunting, ie finding colonies that have naturally occurred in hollow trees or crevices in rocks and stealing the honey. There also appeared to be a number of traditional hives in use though -- hollowed palm logs hoisted up into trees. Honey is harvested at night without a bee suit and the entire colony is taken. They (or at least the one of them that could speak English) seemed to understand the benefits of a topbar hive but appeared intimidated by the task of putting it together. In particular he was "waiting for zinc" by which he meant the corrugated metal they put on their roofs (is that really zinc? I'd probably call it tin though I don't know if that's correct either. I'd have guessed it's aluminum). He was in fact skeptical when I tried to dissuade him from using corrugated metal (the rain makes a huge racket on it, which can cause the bees to abscond), but I showed him some pictures of hives with wooden lids or wood covered in plastic or tarp and he seemed persuaded he didn't need to wait for his zinc.

They had one hive near the village that had inhabited a cute little granary hut, and so they let it stay there for harvesting. Opening a hive during the day was something they had to see to believe, so they had me suit up and open it. If I didn't know better I'd say the young fellows were actually laughing at me as I suited up (okay I think they were). They didn't have a smoker and I hadn't brought one, so I just used the traditional bundle of reeds. Unfortunately this doesn't allow you to blow smoke into the hive BEFORE you start, so the bees ended up getting a bit riled up and everyone who had been crowded around in a 30 ft radius or so went running for their lives. I examined the comb and determined that none of the honey was capped, ie it was not ready to be harvested, so I closed it up and walked to a clearing a little ways away and waited for the bees to stop following me so I could join everyone else without bringing bees with me.
Blessing came and shouted to me to set fire to the surrounding brush (presumably to disperse the bees), a suggestion which I didn't really appreciate, being as that would make the whole thing a big fiasco and my whole goal is to show that beekeeping can be simple and easy. While the bees were a bit angry they still weren't even as bad as some "Africanized" colonies I've encountered in California. After a few minutes I was able to take my suit off and rejoin the others. 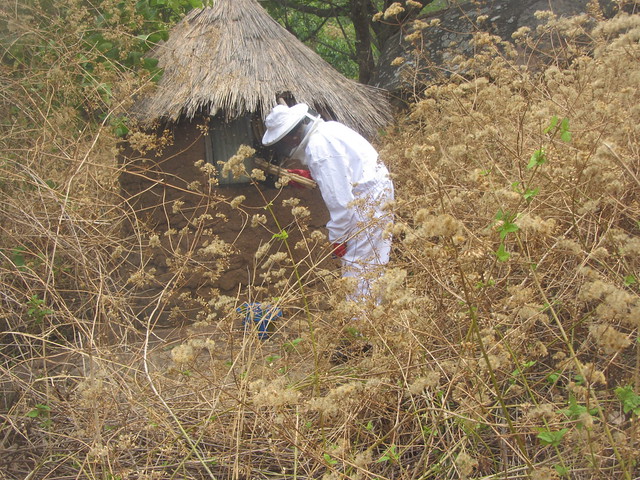 Another thing to note is whenever I tell anyone here who does beekeeping or honey hunting that they should NOT harvest honey that is not capped they about roll their eyes acknowledging that they know this. BUT for example on this occasion when I reported it wasn't capped so I didn't take anything out, the English speaking villager (who had earlier also acknowledged that uncapped honey should not be harvested) seemed frustrated and said "yes but it might be gone later, or it will rain and water it down." So I explained that the bees will only cap it once they've gotten the water content down to suitable levels. If you harvest uncapped honey it will not ferment and go bad. I explained that he'd be better not selling any honey than selling that uncapped honey because it WILL go bad and he'll get a bad reputation for selling bad honey. I'm not sure I convinced him though.

And then we had the long trek back down!


Sunday - Oh dear god. So. Despite the locks sometimes being really hard to lock or unlock (I've had to call maintenance twice), and the AC frequently not working, and various other similar problems, I've been telling myself this is a third world hotel cut them a lot of slack. But today they had music BLASTING all day long down by the pool. So loud that even in my room with the windows closed when I tried to talk to Kori on skype I couldn't hear her (and the volume on my computer was up as high as it could go). Oh it was horrible and I had nowhere to go to escape (we didn't work today, and it's unsafe for me to go into town by myself, and I don't know where I'd go all day anyway). And music blasting all day like that is not a problem I can chalk up to lack of developed resources such as the AC, power, and lock problems. 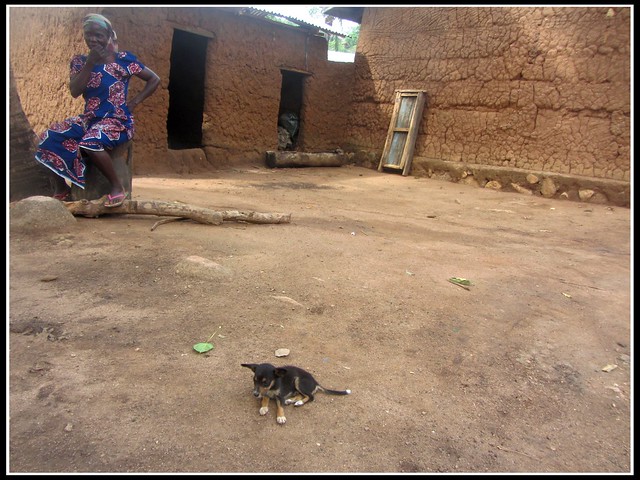 Nigerian dogs are in general very small, but here's a tiny little pup!

( Other pictures from Saturday's trek )