So one morning I was sitting in a little cafe in central Nigeria and they put nescafe IN THE ESPRESSO MACHINE. That was it. It was just too much. The next morning I was on a plane to Ethiopia, the origin of coffee.

The origin, of course, of not just coffee, but life as we know it. I was returning to my homeland, to everyone's homeland. (It's only been 100,000 years or so since we left)

A coincidence that Homo sapiens and Coffea arabica originated in the same place? I think not! 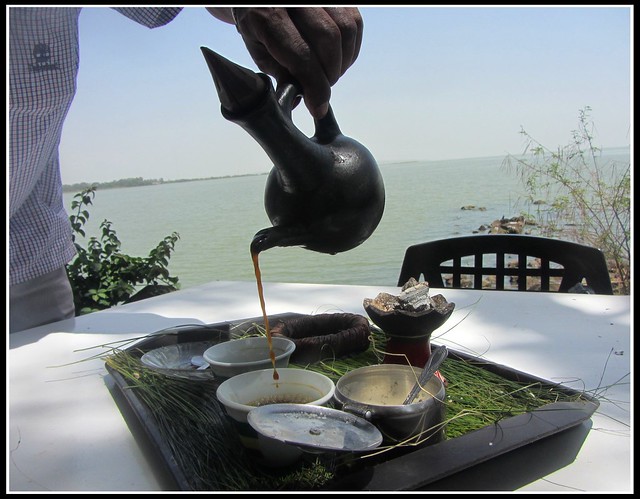 And I haven't seen nescafe since!

Flight took about five hours, and took me two hours into the future and 8 years into the past.
The next day I was wondering for several hours why there was a meeting with another NGO (ACDI/VOCA) scheduled for 8:30, until I was finally informed that in Ethiopia they reckon time from 6am, so 2:30 is their 8:30. The new day begins not at midnight but at 6am. Additionally the Ethiopian year has 13 months and... it is currently officially the year 2004 in Ethiopia. My friends back home tell me it's a good year to invest in Apple.


South Sudan looks VERY dark from the air at night. The occasional lights one does see look like they are probably bonfires or something. Or lights the same shade of orange and flickery.
Ethiopia is also pretty dark, and then suddenly Addis Ababa appears over a ridge as a giant splatter of twinkling stars far below. While most American cities I've seen from overhead at night appear as grids and lines of warm toned lights, Addis looked like a giant starfield with no grids or straight lines, and most of its lights were a star-like blue-ish white.

Arriving in the Addis Ababa airport I was struck by how friendly everyone was. In the Nigerian airport they're not exactly rude per se but everyone working there seems at least "gruff," and security seems prone to hassle you just because they can. But everyone in the Addis airport including the immigration officials (ground zero of gruffness in the Nigerian airports) was very friendly.
A girl trying to snag people for her hotel as we came out of the baggage claim even seemed genuinely concerned about helping me find my contact and volunteered the use of her phone to call him (for free!).


Tuesday My hotel was rather fancy, and cheaper than a Motel 6 in the US.

At the complimentary breakfast the food was all out in a buffet, but coffee was made to order in the kitchen. Welcome to Ethiopia!


Met with the winrock staff (the two of them), had a delicious lunch of spicy ground lamb, a sort of bread made from the root of the "false banana" tree, fresh rolls of normal bread, and peanut tea.

Then we drove across town (took 50 minutes, longer than the later flight across the country) to visit the NGO ACDI/VOCA, who is actually running the project.


Wednesday (today) - Woke up at 4:30 for my 7:30 flight. The Ethiopian airport asks everyone to be there two hours before every flight, but I've never gotten into an airport so quickly and smoothly!

Leaving the Nigerian airport they had searched my carryon bag and found a nailclippers, which the guy confiscated from me with a disappointed shake of his head and stern look.
In the Ethiopian airport now they discovered a six-inch-long sharpened-at-both-ends hive tool in my carryon that had presumably also been there when I left Nigeria ... and they let me take it on the plane after the took it out and looked at it!
I still don't understand how you could POSSIBLY hurt someone with a nail clippers...

Flight from Addis Ababa to Bahir Dar here took about 45 minutes. Here I was met by ACDI/VOCA representative Terefe and driver Belde. They initially suggested I might want to rest, but the day was just beginning and I had plans! Esp since every day after this will probably be busy, I wanted to hit the ground running with some sightseeing!
Terefe had some work to do so it was Belde (who looks kind of like a dark skinned Jean Reno, IMO) and I most of the day. For about $15 I got a lad operating a small boat to take us to a nearby island on Lake Tana. On our way we saw hippos.

On the island was a church said to be 900 years old. That may be true but I'm not sure this book is also 900 years old like they said: 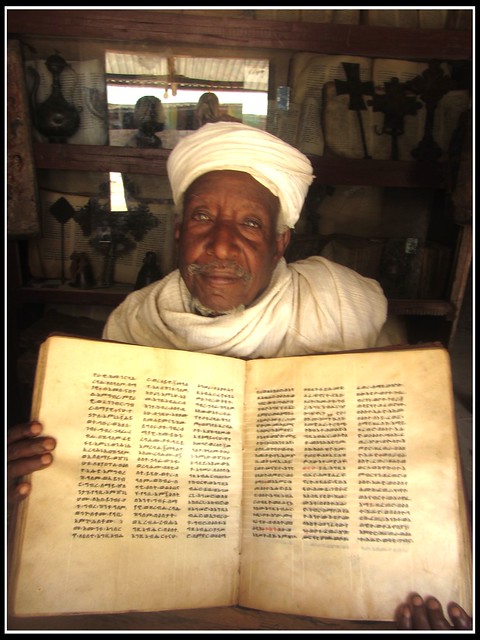 Though I'm sure it's rather old. See also: the Ethiopian alphabet!

Then we had a delicious lunch prepared by Belde's wife, who runs a little restaurant: 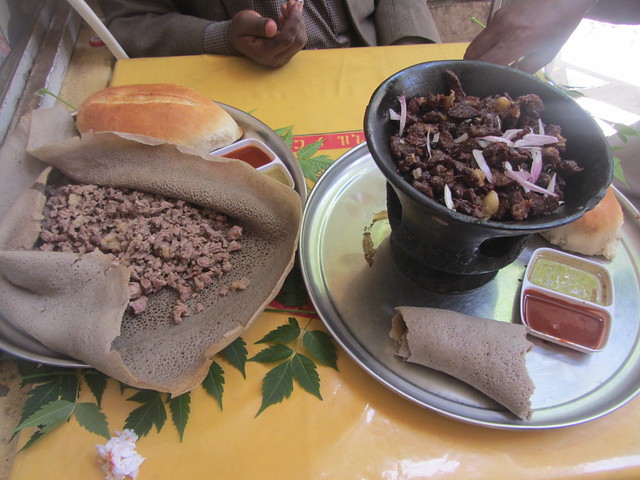 And then we drove out to the Blue Nile Falls (Tis Abay), the official starting point of the Blue Nile (which provides 85% of the volume of the consolidated Nile). My battery is getting low and I want to get this posted so maybe I'll post more about it later. In the mean time here's a picture: 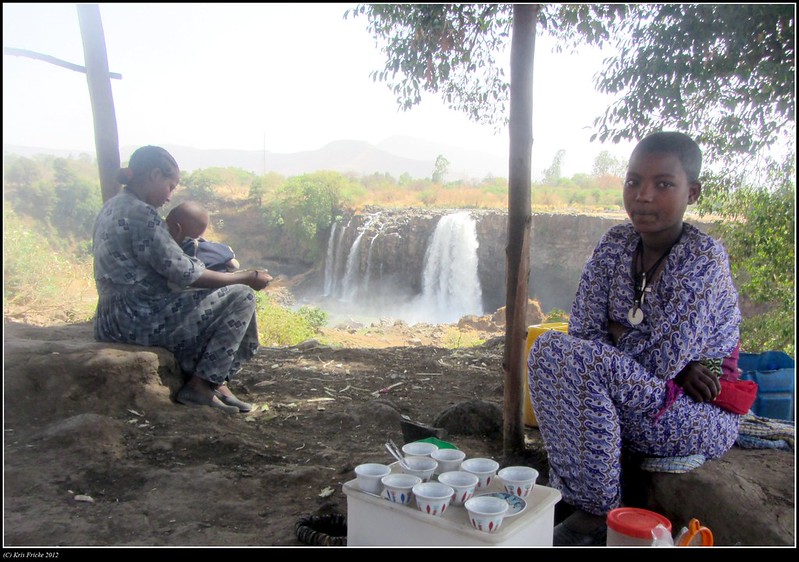 The Tis Abay waterfall and a young girl serving coffee. How more Ethiopian can you get?

Posted a heap of pictures from Ethiopia today most of which were from today. So look at them for a even fuller report on today!